Due to trauma, teeth can have an extensive lesion along with external inflammatory resorption, with no history of pain or mobility, which can be discovered in routine dental examination only. Depends on the case, treatment options of such teeth may vary, and can include both, surgical or nonsurgical approach. Various clinical studies have confirmed that with simple nonsurgical root canal treatment, even large periapical lesions can be treated successfully, if the lesion is in direct communication with the root canal system. Recently, few cases have been published, in which large periapical lesions with external inflammatory resorption has been successfully treated by nonsurgical root canal treatment. This article also reports a case in which a mandibular central incisor with a large periapical lesion and inflammatory root resorption has been treated successfully with nonsurgical endodontic therapy.

Root resorption in permanent teeth is uncommon, [1] pathological [1,2] dental complication, [3] that involves the interaction between inflammatory cells, hard tissue structure, and resorbing cells. [2] Root resorption can even lead to tooth extraction, [3] as it is not only difficult to predict and diagnose, but also quite difficult to treat. [2] Active resorption is seen because of stimulation of osteoclastic cells by pressure or infection, and if the etiological factor is removed completely, resorption can be reversed. [3]

Amongst all etiological factors, pulpal infection is the most common factor that not only leads to the formation of periapical lesions, [3-5] but also leads to tooth resorption, [3] which are mainly, more than 90%, are classified into radicular cysts (6%- 55%), periapical granuloma (9.3%-87.1%), and periapical abscess (28.7%-70.7%). [4] Radiographically, periapical lesions cannot be differentiated between cyst or granuloma. [5] However, studies showed that incidence of cyst is more than 92%, if radiographic lesion size is 200 mm2 or more. [4,5]

Thus, the purpose of this article is to report the clinical case of a lower anterior (tooth #41) with pulp necrosis, large periradicular lesion, and inflammatory apical root resorption, which has been managed successfully by simple nonsurgical root canal treatment.

A 27-year-old male patient came to the Endodontic division at A Conservative Orthograde Approach for Successful Nonsurgical Management of Mandibular Central Incisor with Large Periapical Lesion and Inflammatory Root Resorption Emtinan Baragaa1 and Gufaran Ali Syed2* 1 Dentistry, KSA; 2 Batterjee Medical College with a chief complaint of discolored lower front tooth due to a history of trauma 10 years ago. Clinical examination with #41 revealed brown discoloration of the tooth, no response to the cold test, no mobility, no sinus opening, and the canal was open to the oral cavity (as RCT has been attempted by other dentist before). Pain on percussion and palpation was absent. Radiographic examination showed a large periapical lesion and inflammatory apical root resorption of tooth #41 [Figure 1]. Radiographically it was appearing as if the periapical lesion was involving the root of tooth #31 and #42 [Figure 1], but with vitality test, both tooth #31 and #42 were vital with normal response. After clinical and radiographic examination, tooth #41 was diagnosed as previously initiated with asymptomatic apical periodontitis. During the second visit, after application of the rubber dam, the intracanal dressing was removed and all canals were irrigated with 5.25% NaOCl and dried with sterile paper points (Meta Biomed Co. Ltd, Korea). The canals were then obturated with the lateral condensation technique, using guttapercha points (Meta Biomed Co. Ltd, Korea), and MTA Fillapex sealer (MTA Fillapex, Angelus, Brazil), and then the access opening was closed with composite restoration (3 M, restoration) and a postoperative radiograph was taken [Figure 3]. To assess healing, radiographs were taken when the patient came for follow-up visits after 6 months [Figure 4], 12 months [Figure 5], and 18 months [Figure 6]. 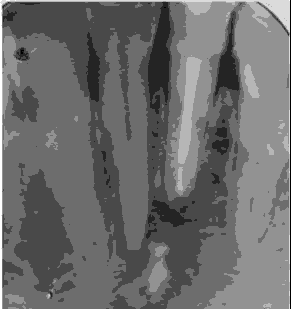 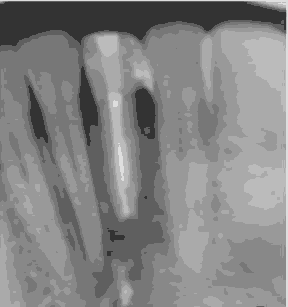 Dental trauma, which causes pulp necrosis with exposed dentinal tubules on the the damaged root surface, is the most common cause for external root resorption. [2] There are different treatment options for large periradicular lesions ranging from

We kept the working length short by 2 mm from the radiographic apex, because according to Weine’s subtraction rules, the working length should be shortened by 2 mm from the radiographic apex, if both, bone and external root resorption are present. [6] During cleaning and shaping, we have used 5% NaOCl for irrigation, because apart from flushing out the debris, it efficiently dissolves the organic material, and has an excellent antimicrobial property, [7] as it causes biosynthetic alterations in cellular metabolism and phospholipid destruction, forms chloramines that conflict in cellular metabolism, has oxidative action with irreversible enzymatic inactivation in bacteria, and causes lipid and fatty acid degradation. [8]

After completing the cleaning and shaping, we have used aqueous EDTA in combination with NaOCl, to remove the smear layer, which blocks the penetration of resin into the dentinal tubules that jeopardized the sealing efficiency of the obturation of the root canal. [8] After removing the smear layer, we placed calcium hydroxide as an intracanal medicament, because it promotes periapical healing by inhibiting the bacterial enzymes, [9] preventing proliferation of microorgamisms, [10] killing the bacteria, [2] increasing the pH of dentin, [2,11-13] causing necrosis of resorptive cells present in Howship’s lacunae, [10] inhibiting the osteoclastic acid hydrolases, [2] and activating alkaline phosphatases. [2,9]

We used glass ionomer cement to temporize the tooth, as it can prevent bacterial penetration to the periapex of root-filled teeth over a 1 month period. [11] While obturation, we used resin sealer with MTA, as it not only have good radiopacity, better flow, high pH, short setting time and lower water absorption, but also produced less inflammatory reaction and demonstrate the superior biocompatibility that can stimulate tissue mineralization. [12,13] In present case, obturation was done with lateral condensation technique because it provides better length control than the other obturation techniques. [6]

After completing the obturation, we closed the access opening with composite resin filling material and we chose not to place a fixed prosthesis, because the extra-coronal crown preparation combined with endodontic access preparation significantly weakens the cervical area of the anterior teeth. [14] Follow-up radiographs were taken after 6 months, and another one after 1 year interval, because healing of teeth with periapical lesion is most marked from 3 months to 2 years. [15]

The authors declare that they have no conflict of interest.