Background: Mast cells(MC) are cells of the immune cells which can secrete a variety of molecules. Many studies suggest that mast cells may either promote tumour growth in some types of cancer or may act in an opposite manner in other tumour types. Aim: To evaluate the association of mast cells in the different grades of Oral Squamous Cell Carcinoma(OSCC). Material and methods: Fifteen diagnosed cases each of well, moderate and poorly differentiated OSCC were identified from the institutional archival material. Two slides each were made of 5 μm thickness and stained with Hematoxylin and eosin and 1% Toluidine blue stain. Each section was evaluated for mast cells in peritumoural, intratumoural locations and at the invasive front of the tumour. The results obtained were subjected to statistical evaluation by an SPSS version 19 using Chi square test, Anova and Post hoc Tuckey tests. Results: An inverse relation was observed between MC count with grade of the tumour with maximum MC located in the peritumoural area followed by the invasive front and the least in the intra tumoural areas. Conclusion: The results of the present study suggest that a decrease in MC count is associated with an advanced histologic grade of OSCC and hence a poorer prognosis, thus favouring the protective role of mast cells in OSCC.

Following the discovery of Mast cells (Mastzellen) by Paul Ehrlich many advances have improved our understanding of these cells and their fascinating biology. Mast cells are commonly seen in various tumours and have been attributed alternatively with tumour promotion and tumour rejection. Animal and pathologic studies suggest that mast cells may promote tumor growth in some cancer types but may act in an opposite manner in others. In several mouse models a critical role of mast cells for tumor promotion was demonstrated. They directly influence tumour proliferation and invasion and indirectly by organizing the tumour microenvironment and modulating immune responses. Various studies in potentially malignant and malignant oral disorders have shown the association of mast cells. However, no studies show their association in the various parts of the progressing front of the tumour. Hence the study was planned with the intention of evaluating the role of mast cells in progression of OSCC.

A retrospective histological study was planned and after due approval of the institutional ethics committee, a sample of 45 histologically diagnosed cases was selected. The tissues blocks were prepared from tissue fixed in 10% neutral buffered formalin, fixed overnight at room temperature were obtained from the department archives. Fifteen cases each of well, moderate and poorly differentiated OSCC were identified from the archival material of the Department of Oral Pathology and Microbiology, SDS, KIMSDU. Two slides each were made of 5 μm thickness from the excisional biopsy specimen of these cases. One slide was stained with Hematoxylin and Eosin, which was used to evaluate and confirm the grade of the tumour and to exclude cases with sparse connective tissue. The second slide was stained with1% Toluidine blue for mast cells.

Three areas were decided for carrying out the mast cell count; 1) peritumoural-areas more than 2 high power fields away from the invasive front, 2) intratumoural-areas with the tumour mass and 3) invasive front of the tumour. Each section was scanned and 3 high power fields at peritumoural, intratumoural locations and at the invasive front of the tumour were identified and used for data collection. A single observer made these observation 3 different times and the average of the score was used for the study. The number of mast cell were counted in each of these fields taking care not to overlap the areas and recount mast cells. The results obtained were subjected to statistical evaluation by an SPSS version 19 using Chi square test, Anova and Post hoc Tuckey tests. P value of less than 0.05 was considered to be statistically significant.

The data when subjected to Chi square test revealed that mast cells were most numerous in well differentiated OSCC followed by moderate and poor differentiation. In all the three grades the mean and standard deviation as described in the figure was maximum for peritumoural area followed by invasive front and the least for intratumoural area [Table 1].

It is well established that cancer is a progressive disease, occurring in a series of well-defined steps. There is a reciprocal signaling interaction between cancer cells and stromal cells within the tumour microenvironment. Initiated cells require alterations rendering them self-sufficient for growth, insensitive to growth-inhibitory signals, resistant to programs of terminal differentiation, senescence, or apoptosis, as well as endowing them with unlimited self-renewal capacity, the ability to orchestrate and direct sustained angiogenesis, and the ability to invade and thrive in ectopic tissue environments.[1]

The association between inflammation and cancer was discovered by Rudolf Virchow, who first described the presence of a leukocyte infiltrate in tumour tissues.[2]

In neo-plastic tissues, inflammatory cells act in concert with tumour cells, stromal cells and endothelial cells to create a microenvironment that is critical for the survival, development and dissemination of the neoplastic mass.[1]

They are arguably the most productive chemical factory in the body and influence other cells through both soluble mediators and cell-to-cell interaction. MC are commonly seen in various tumours and have been attributed alternatively with tumour rejection or tumour promotion.[4]

Mast cells accumulate in the stroma surrounding certain tumours, especially mammary adenocarcinoma, and molecules they secrete could benefit the tumour. These include heparin, interleukin-8 (IL-8) and vascular endothelial cell growth factor (VEGF), which induce neovascularization, histamine, which is an immunosuppressant, mitogenic factors, such as plateletderived growth factor (PDGF), nerve GF (NGF), stem-cell factor (SCF), and proteases, which disrupt the surrounding matrix and facilitate metastases. By contrast, mast-cell mediators detrimental to the tumour include cytokines, such as IL-1, IL-4, IL-6 and tumour necrosis factor-α (TNF-α), which can induce apoptosis of tumour cells, tryptase, which stimulates proteaseactivated receptors and induces inflammation, and chondroitin sulfate, which could act as a decoy and inhibit metastases.[5]

Many studies have demonstrated tumour growth induction secondary to mast cell activation. Diverse mechanisms such as the release of pro-angiogenic inducers and activation of CD30 by mast cells have been observed.[6]

Coussens et al. reported that mast cells, “infiltrate hyperplasia, dysplasias, and invasive fronts of carcinomas,” and then release the mast cell-specific proteases chymase and tryptase-the former acting as a mitogen and the latter being angiogenic to skin fibroblasts.[7]

Ribatti et al. have suggested that an increased MC count is associated with progression from common nevi to malignant melanoma. The higher the mast cell counts in the tissue, the deeper the penetration into the dermis and the more likely the tumour is to undergo metastasis.[8]

However, in our study we found a decrease in the number of mast cell as the grade of tumour progressed from well to poorly differentiated OSCC suggesting a protective role of mast cells in OSCC as against the earlier mentioned studies. The results of our study were in favour with Debta et al. who in their study on mast cells and eosinophils concluded that these cells are favourable indicators in OSCC.[11]

The other points that were also observed during the present study was a decrease in the number of MCs in the invasive front and intratumoural area in comparison to the peritumoural areas of OSCC [Figures 1a, 1b and 1c]. Reasons for this may be understood from histochemical and molecular studies on the mechanisms that determine the pathway that mast cells will eventually select in bringing about the final outcome. 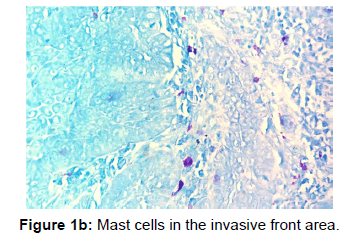 Figure 1b: Mast cells in the invasive front area. 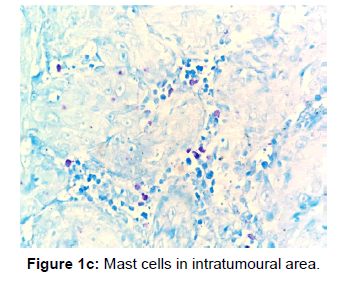 In a study on 55 cases of infiltrating ductal carcinomas, the results were similar to our study with higher mast cell count in lower grade tumours, suggesting a protective role of mast cells in breast cancers. They also found that the MC counts were more in peritumoural and intratumoural areas of well differentiated tumours which was also found in the present study. The reason for increase in MC numbers on peritumoural areas was suggested due to possible migration of mast cells by tumour derived chemoattractents.

We also observed that when we did see mast cells in intratumoural areas or invasive fronts they were in close proximity to the neoplastic cells. Another observed finding was that apart from the established perivascular sites increased MC counts were also observed in the salivary gland tissue seen in proximity to the tumour. Further studies may be carried out to ascertain if there is any association between the two.

In our study, we found an association between the histological grade of OSCC with the MC count. The decrease in the MC count from well to poorly differentiated OSCC was found to be statistically significant. The results of the present study suggest that a decrease in MC count is associated with an advanced histologic grade of OSCC and hence a poorer prognosis, thus favouring the protective role of mast cells in OSCC.

The famous author Robert Frost may not have dreamt that his quote “The woods are lovely, dark and deep. But I have promises to keep and miles to go before I sleep” could apply so aptly to the research on the Jeckyl and Hyde of tumour microenvironment. The type of mast cells, the products these cells secret, their migration and degranulation and other factors that eventually decide the behaviour of MC need to be studied for precisely targeting treatment modalities that utilize mast cells and for establishing reasons as to why these cells function differently at different situations We hope that future studies open new dimensions and shed new light towards a better understating and behaviour of this Paul Ehlrich’s legend, that stills lives on. 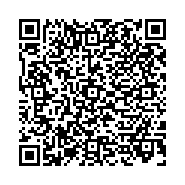