A Survey of Characteristics of Self-Immolation in theNorthern Iran

Background: Suicide is an action deliberately initiated and performed by a person with complete awareness of its fatal outcome, prevalence of which is very rare in developed countries, but it is reported with more frequency in Middle East including Iran. Aim: This study was carried out to analyze the characteristics, mortality, and related factors of burned patients who attempted to suicide by selfâimmolation in Northern Iran. Materials and Methods: In this retrospective study, the archived files of 101 cases that referred to the main burn care center located in northern Iran (Included: Mazadaran, Golestan cities) â cause of suicide attempting by selfâimmolation during 2 years 2010â2011, analyzed. A record sheet designed to extract data such as: Age, education, occupation, gender, residence, marital status, drug abuse, and extent of the burn injuries as a percent of burned total body surface area (TBSA). Results: The incidence rate of suicide attempted cases were 1.98/100,000 personâyears. The mean ages for cases were 31.8 (13.6). The mean age for males and females were 36.1 (14.8) and 30.1 (12.9) years, respectively. In, about 84% (84/101) of the patient’s burned TBSA was more than 40% (41/101). Burn injuries were more frequent, larger, and included higher mortality in females than males. Kerosene was the most common used material to selfâburning. The mortality rate was about 74% (74/101), which showed a high mortality rate in this study. Other social factors such as marital status, employment, and education level have a role as individually protective or risk factors for selfâburning. Conclusion: Finding of the current study manifested high rate of suicide by selfâimmolation among young, married, and low educated women in Northern Iran. It implies a social problem, and need to an arrangement of a cultural program aimed to improving health, psychological habits and educational level.

Suicide is one of the major psychological health issues in the different parts of the world. Methods and means of deliberate self-injury are depended to the geographical region, social factors, gender, and cause availability.[1] According to the latest World Health Organization reports, around 1 million people die cause of suicide with a global mortality rate of 16/100,000/annum.[2] Suicide is among the three leading causes of death among those aged 15-44 years in some countries and the second-leading cause of death in the 10-24 year age group.[3]

In the developing countries, studies have found that alcohol was rarely involved, a previous psychiatric history was not present, but verbal and physical abuse was a frequent occurrence.[4] Emotions such as family conflict and romantic disappointments were common among the Iranian students who committed suicide.[5] Self-immolation is cause of 25-40% of all types of suicide attempting in Iran,[6] with a variable incidence in some parts of Iran; it is the second cause of death due to successful suicide after hanging, with the mortality rate of around 76% (74/98).[7] Out of all self-injury methods, burning by fire is perhaps the most dramatic, rare and potentially fatal, and it needs to be investigates in its clinical and psycho-social aspects. Laloë reviewed 55 studies from all countries in 2004 from last 20 years; he has found that the highest rate of deliberate self-immolation was observed from India, Sri Lanka, Egypt, and Iran.[8] However, the incidence, pattern and trends of suicide substantially is different between Asian and Western countries they also differ considerably between Asian countries and regions.[8,9] It is well-documented that suicide method and cause with self-burning are depended to the geographic area and social-economic patterns, such as; Age, sex, and other psychosocial risk factors. In different parts of Iran, the incidence of suicide by self-immolation was comprised different range from 0.9 to 19/100,000/year.[5,10] Based on evidence women are the main victims of self-immolation in term of suicide in Iran,[11-13] and kerosene was main burn agent.[12] Since, suicide by self-immolation is an prominent cause of fatal in Asia and Middle East countries; therefore, it is important to know common scenarios, risk factors, methods and characteristics of attempted cases as well as suggesting some strategies for prevention in high-risk geographical areas and peoples. This study carried out to survey the epidemiology, mortality and some related demographic factors among peoples committed to suicide by self-immolation in northern Iran.

In this retrospective analysis of medical records study, the data obtained by analysis of the medical records of patients in Zare Hospital from January 2010 to December 2011. The patients referred from all the primary rural and urban health care centers, and clinics of three provinces as Mazandaran, Golestan, and Semnan. The Burn Center of Zare’s hospital is the oldest and only referral Burn Care Center in Northern Iran, which covers Semnan, Mazandaran, and Golestan provinces. In this study, the cases referred from Semnan excluded cause Semnan city in not located in North of Iran. Mazanadarn and Golestan provinces have 2922432 and 1617087 population, respectively. Thirty nine and fifty one patients were from Mazandaran and Golestan provinces, representing an incidence rate a 1.3, and 3.1/100,000 person-year, respectively. In Golestan, the incidence rate of suicide by self-immolation was higher for female with 1.7/100,000 person in a year than Mazandaran [Table 2]. 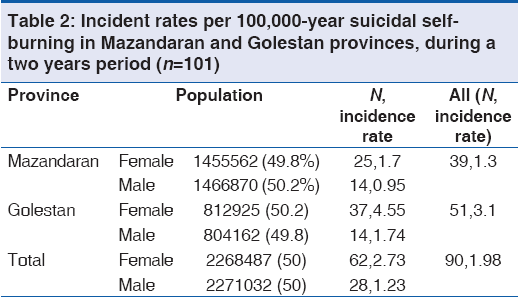 The frequency of the married population was higher than singles and among the rural population was slightly higher than urban population. 9.9% (9/101) of them were illiterate, rest primary, secondary and advanced. The level of education was lower in Golestan in compare of Mazandaran. 59.4% (59/101) were the housekeeper in the house. Frequency of home keepers also was high in Golestan. Demographic information of two provinces presented separately in Table 3. 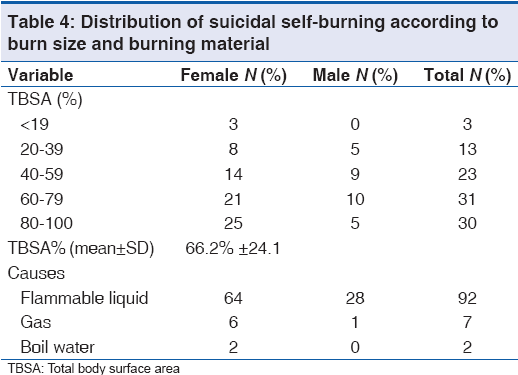 In current study, the highest incidence rate of suicide by self-burning happened in the young age groups. Frequency of suicide by self-immolation among females was higher than males. Kerosene was the major used material for self-burning. Self-inflicted burns were noted mainly in young age groups with the low level of literacy. Major of suicides occurred at home. The frequency of suicide by self-immolation in rural areas was higher than urban areas. There was some limitation in our study; the main limitation was reporting incidence of self-burning among only hospitable attended cases, cause of unavailability of all records of self-burned in whole providences. Another limitation was related to limited cases, and we could not report more data about psychological factors cause of uncoordinated hospital staff and family of severity-injured suicide committed cases. Another limitation was filling data records mostly by the caregiver’s information cause of mental or physical severity of patients.

The mortality rate was 74 deaths out of 101 suicides committed by self-immolation during 2010-2011 years. Analysis of these data showed that the annual incidence rate of suicide mortality by self-burning was about 1/100,000-year general population for two provinces and females had a higher rate than males. This finding is similar to the situation in Ahmadi et al.,[14] other Asian populations,[9,11,15,16] and in other provinces of Iran also.[17-19] Although, the incidence rate of self-burning suicide was different in Iranian population depends of geographic areas.[1,12,18,19] Different annual incidence rate for suicide by self-burning were reported in different provinces of Iran for instance: Tabriz (7.7), Ilam (68), Hamadan (8.3), khorasan (2.8) and Kohkiluye va Boyerahmad, 7/100,000.[7,20-24] The explanation of low annual incidence rate of suicide by self-burning in Northern of Iran (Mazandaran and Golestan), in comparison with other parts of Iran, are economic, social, cultural, and educational factor. Except in Tehran, which the incidence rate of suicide by self-burning has been reported 0.9/100,000 in general population-years,[25] the incidence rate of self-immolation is high. The residents of capital are expected to have relatively higher levels of education and facilities in compare of other cities. As evidence showed level of education is a critical parameter of suicide by self-burning.[20-23] In our study, it is very interested the different suicide rate in Mazandaran and Golestan provinces, it was 1.6 and 3.3/100,000-year, respectively. However, these provinces locate in Northern of Iran; it is explainable by some economic, social or educational reasons, considering Mazandaran is bigger, income is almost higher, and facilities such as psychotherapy, Non Governmental Organisation, educational courses, social freedom for woman are more available.

Finding also demonstrated that younger age group of 15-34 years shows the most pre-dispositions for the occurrence of self-burning, accounting for 70.2% of cases. Of all self-burning victims 70% were married, and 90% of them were female, and younger than males. Similar findings have been reported from various parts of Iran.[20-23] While, there is no differences in male and female age range in Russia and Italy case.[35,36] The socio-cultural reason for more women sustaining self-burning injuries at an early age compared to males is probably more exposure to social and family stress, much earlier than males. In a developing country like Iran woman get marry earlier than males in the family.

In our study, flame was the most common used material for self-burning. The majority of decedents (91.6%) in the present study used kerosene or gasoline as a fire accelerant. This is close to the reports from other provinces of Iran, Indian subcontinent and the Middle East while in European, and North American populations, gasoline was frequently used.[37] As most of self-burnings were happened in suburban areas, seemingly, they had easy access to kerosene and gasoline’s a fire accelerant.

The mean burned total body surface area (TBSA) of the decedents was 66.2 (24.1). This is similar to other reports from other parts of Iran, India, and the Middle East reports, but is higher than the majority of European and American populations.[12-20,38] There is a consensus that mortality is extremely high when TBSA burn exceeds 70%, it seems that self-burnings, in contrast to unintentional burns, can cause severe damages. Of 101 patients 74 (73.3%) died in hospital. In this study, 23/101, 38/101, 27/101 and 35/101 of our patients died within the first 48 h, 72 h, 5-15 days and 15-73 days after admission, respectively, it shows that infections and septicemia affected on the mortality rate in patients. There was a significant correlation between burned TBSA percentage and mortality rate.

Most of the female victims in our study were housewives. This explains why most of the self-burning attempts occurred at home. In Western countries, single old men included the majority of victims of self-immolation.[26-29] While in Iran, the majority of victims are young married women.[19-24,37] It seems there is lack of appropriate counseling services in the community for young women in Iran, Therefore, they could not express themselves pressure. Thus, there is need to plan and implement a prevention program in Iran, with focusing on characteristics of patients aimed to reducing the incidence of burn injuries and associated mortality among young persons. In our opinion, social factors are the main drive leading to an unacceptably high rate of suicide by self-burning among women in Iran. Other factors related to self-burning suicide are economic, educational, social parameters, and psychiatric disorders.