Glues consist of cyanoacrylate. Cyanoacrylate burns are unusual chemical burns. If it comes into contact with cotton a severe exothermic reaction occurs and results as a thermal burn. Cyanoacrylate (CA) was described in 1949 first and the usage as adhesive was recognised. The homologues of CA adhesive have been used, including methyl-, ethyl-, isobutyl-, isohexyl-, and octyl-CA in the different industriel fields. For to create less toxic product in 1960s, the formulation was changed to butyl cyanoacrylate for possible medical use. It has an increasing use in the household also. Now it has a widespread use as an all-purpose, however the frequent application of CA is as adhesive domestically. We report a five year old girl who accidentally split glue on her pyjamas and had a full thickness burn on her left thigh while playing with glue at home.

Nearly all the burns in literature were observed in children due to the accidental spillage. Therefore it’s important for the public to raise the idea of CA glues should be kept safely away from the reaches of the children.

Glues used in various industries consist of cyanoacrylate which is a monomer formed by the reaction of formaldehyde with alkyl cyanoacetate. It has names such as super glue or crazy glue and in our country with the names super glue, 502 super glue [Figure 1], Quick star are currently used in the industry. [1] And besides in the medical literature they are used as tissue adhesives for skin fixation. Due to the repetative contacts it can be the cause of epidermal spongiosis and eczema. However if the glue comes into contact with cotton exothermic reaction occurs and thermal burn can happen. 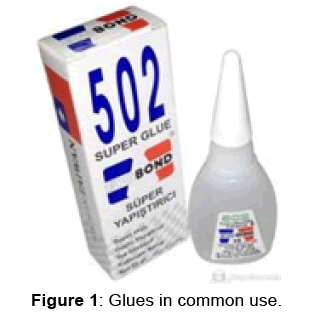 Figure 1: Glues in common use.

Cutaneous burns are rare and up to date eleven cases reported. We report a full thickness burn in a five year old girl who had spilled the glue on her cotton pyjamas.

Our case is a five year old girl. She had spilled half bottle of glue on her cotton leggings while playing at home. After the glue’s reaction with the cotton due to the exothermic reaction which burnt a hole in her leggings 3 × 5 centimeter full thickness burn occurred [Figure 2]. Her mother removed the girl’s leggings and irrigated under cold water. Then they decided to go to the local hospital. There applied antiseptic cream to the area and they returned home. In the second day the wound and the pain worsened. They referred to the Burn unit the next day. On her examination there was a 3 × 5 centimeter full thickness burn on her left thigh. There was erythematous lesion surrounding the burned area. She had no medical past history. Her vitals were stabil. She was alert but agitated with pain. There were no lesions on her body except the left thigh. On the 3rd, 6th and 9th days under general anaesthesia dressings were performed [Figure 3]. The postoperative period wasn’t complicated with wound infection. Graft reconstruction was offered but her family didn’t accept. The burns were healed with hypertrophic scarring in 23 days. 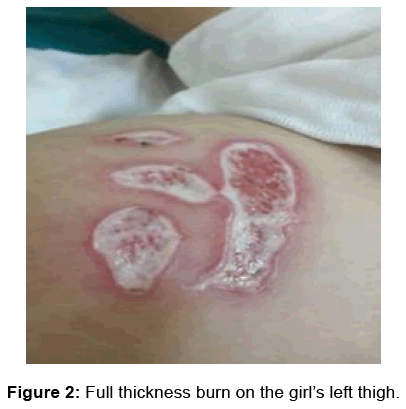 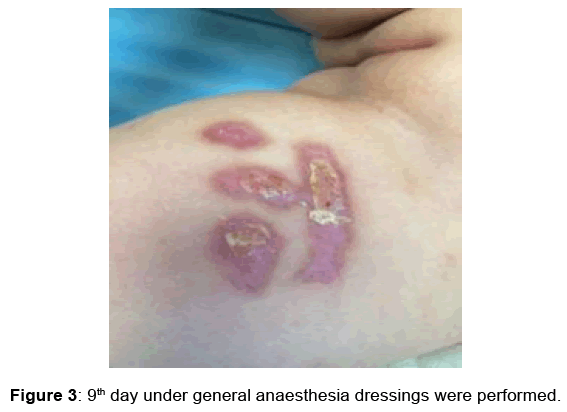 About 70% of burns in children are caused by scalds. The mechanisms are usually hot liquids. Burns from CA glues are rarely seen in children and twelve reports have been reported up to now. In pediatric population it accounts approximately 10%. [2] When CA contacts with moisture it reacts and exothermic reaction starts and leads to burn. The main disadvantage of CA is its toxicity which can cause contact dermatitis, urticaria as a result of the degradation of cyanoacrylate to formaldehyde and cyanoacetate compounds. CA glue can cause fast exothermic reaction and can burn. Injury can occur in case of contact with skin when touched with cotton. Full-thickness necrosis of skin can be complicated by a secondary super infection. [3,4]

Tang et al, in their case report, suggested a similar mechanism for the burn injury, with moisture in a patient’s jean as the cause for exothermic reaction. However, other authors have reported burns after direct contact of the adhesive with the skin. [5]

Coles and friends reported four cases of glue burn with full thickness managed with dressings. [6] Kelemen and his friends reported nail glue adhesive burns which underwent surgical debridement. [7] Nearly all the parents are usually unaware of burn and doesn’t take their clothes off immediately. The most important part is to get rid of the affected clothing. In case the clothing is firmly attached to the skin pulling the clothing must be avoided. In our case as the other ones her mother noticed when she cried loudly, and took the clothes off. She wasn’t aware of the glues such side catastrophic effects.

The absence of care and attention from the parents or caretakers contribute to these kinds of trauma. In the emergency department clinical assessment and the estimation of the burned area or total body surface area (TBSA) must be calculated. First aid at home for the families must start with the stopping of the burning process, removing the burning agent and irrigating with water. Clothing’s shouldn’t be stuck to the burn site. Families must cool the burn with running cold tap water for 20 min at least and mustn’t use ice. A clean dressing can be used.

Glue burns are unusual but the public must be aware of this potential danger leading to chemical burns. As a result of accidental spillage, nearly all the burns are seen in children. They should be kept away from the reaches of the children. Families must be thought about out the first aid in order to reduce the severity of these burns. This report presents a case of CA glue adhesion and highlights the knowledge of the relevant emergent situation.