Adnexal Tumors of Skin: An Experience at a Tertiary Care Center at Delhi

Background: Adnexal skin tumors are a heterogeneous group of uncommon tumors usually misdiagnosed clinically due to a huge variety of types and their variants. Histopathology usually helps in establishing the diagnosis. Aims: The study was undertaken to analyze the morphological, clinical, and histological features of adnexal tumors (ATs) of the skin at our center over a period of 4 years. Subjects and Methods: retrospective study was conducted over a period of 4 years (April 2010–March 2014), comprising 25 ATs of skin diagnosed in the Department of Pathology, Hamdard Institute of Medical Sciences and Research, Jamia Hamdard, New Delhi. All the consecutively reported AT cases were reviewed and reclassified as AT arising from sebaceous glands, hair follicles, or sweat glands. The concordance of clinical and histopathological diagnosis was also assessed. Results: Most of the ATs were benign (24/25) with head and neck being the most common location (72%). Nearly 56% of the tumors exhibited sweat gland differentiation, 28% hair follicle differentiation, and sebaceous gland tumors accounted for 16%. The most common varieties of tumors encountered in the present study included hidradenoma papilliferum and pilomatricoma. The concordance between clinical and histopathological diagnosis was found to be 50% approximately. Conclusions: ATs of the skin are rare neoplasms with benign tumors being far more common. They are often misdiagnosed clinically, so histopathology remains the gold standard for establishing an accurate diagnosis of skin ATs.

Adnexal tumors (ATs) are the tumors arising from the appendages of the skin such as sweat glands, sebaceous glands, and hair follicles. Adnexal skin tumors are usually misdiagnosed clinically, and histopathology usually provides diagnostic confirmation. ATs are a heterogeneous group of skin tumors with mostly benign behavior. These are usually found as solitary, sporadic lesions; however, certain specific types of multiple tumors maybe an indication of some complex genetic syndromes, for example, Cowden’s syndrome and Muir Torre syndrome.[1,2] Occasionally, a significant association has been observed with certain internal malignancies.[3]

This study was undertaken to analyze the morphological, clinical, and histological features of ATs of the skin at our center over a period of 4 years.

The present study was a retrospective study over a period of 4 years (April 2010–March 2014), including all the ATs of the skin diagnosed in the Department of Pathology at Hamdard Institute of Medical Sciences and Research, Jamia Hamdard, New Delhi. All the consecutively histopathologically diagnosed ATs of the skin, irrespective of their clinical diagnoses, were included in the study.

Patients’ clinical details such as age, sex, provisional clinical diagnosis, size, and location were documented. The excised specimens were subjected to gross and microscopic examination using hematoxylin and eosin stain. A few cases were subjected to periodic acid-Schiff (PAS) stain and alcian blue stain as and when required for establishing a correct diagnosis. All the slides were reviewed and reclassified as AT arising from sebaceous glands, hair follicles, or sweat glands. The concordance of clinical and histopathological diagnosis was also assessed. If clinical suspicion of AT was kept before biopsy, such cases were considered concordant.

In the present study, over a period of 4 years, a total of 25 ATs of the skin were diagnosed. Benign ATs constituted the majority of tumors with 24 out of 25 cases (96%) while only one case of malignant AT was encountered. The sweat gland tumors accounted for the largest number of cases 56% (14/25), followed by hair follicle tumors (28%) and sebaceous gland tumors (16%) [Figure 1]. 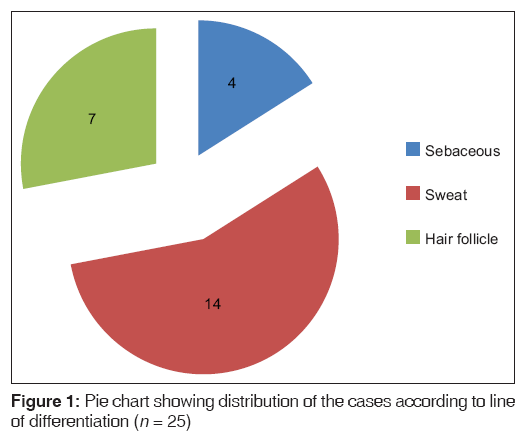 Figure 1: Pie chart showing distribution of the cases according to line of differentiation (n = 25)

The head and neck region was the most frequently involved location for ATs of the skin accounting for 72% of the cases followed by extremities (20%) and trunk (8%). Clinically, these patients were suspected to have cysts, soft tissue tumors, or ATs. In 48% of patients (12/25), ATs were clinically suspected by the clinician before excision, while in 52% of patients, ATs were diagnosed only on histopathology. The tumor size ranged from 0.5 cm to 5 cm in maximum dimension, with 80% of the tumors being <2.5 cm in diameter. The clinicopathological characteristics of the study group are shown in Table 1.

The most common varieties of tumors encountered in the present study included hidradenoma papilliferum and pilomatricoma with four cases each. The frequency distribution of the various adnexal skin tumors is shown in Table 2.

Table 2: The frequency distribution of the various adnexal skin tumors

The benign tumors of epidermal appendages can be classified into four groups depending on the line of differentiation into tumors with differentiation toward hair follicles, toward sebaceous glands, toward apocrine glands, and toward eccrine glands. The malignant ATs are of three major types: carcinoma of sebaceous glands, of eccrine glands, and of apocrine glands. Occasional cases of malignant tumors of hair follicle differentiation have also been reported such as pilomatrical carcinoma, malignant proliferating trichilemmal cyst, and trichilemmal carcinoma.[1,2] The incidence of benign ATs outnumbers the malignant ones in most of the studies in literature.[4-17] In the present study also, 96% (24/25) of the tumors were benign with only a single malignant tumor.

The diagnosis of ATs poses great diagnostic difficulties owing to a variety of reasons, namely, the enormous types of tumor with their variants, the occurrence of multiple lines of differentiation in a single tumor as well as the complicated nomenclature. ATs originate from multipotential undifferentiated stem cells, rather than mature cells, which have the capability to differentiate along particular pathways, maybe multiple.[1,2]

Table 3: A comparative analysis of Indian literature with regard to the line of differentiation of adnexal tumors

In the Indian population, the overall incidence of skin ATs is very low as documented by several studies.[9,11-15,17] The location of ATs varies with the histologic type. By far, head and neck region is the most common location where ATs are frequently encountered, the other sites being axilla, trunk, legs, etc. In the present study, in 72% of the cases, the site of predilection was head and neck followed by extremities (20%) and trunk (8%). The predominance of ATs in the head and neck region is a well-documented fact supported by most of the series in literature. This is accounted for by the fact that this region is rich in pilosebaceous units, apocrine as well as eccrine glands, thereby providing a fertile environment for the development of ATs.[18]

Most of the ATs in our study (52%) were <1.5 cm in maximum dimensions. Very rarely, the size of these tumors exceeds 4 cm in diameter. Jindal and Patel[12] also observed that 76% of tumors in their study group were <2 cm in size.

Hidradenoma papilliferum was the most commonly encountered tumor in our series with a total of four cases. It is usually found in women in labia majora or in perineal or perianal region. We came across an interesting case of a cystic swelling in the right labia minora in which the clinical impression was a Bartholin’s cyst. It is a well-circumscribed tumor located in dermis composed of tubular and cystic structures with papillary folds projecting into cystic spaces [Figure 2]. Figure 2: Photomicrograph of hidradenoma papilliferum showing (a) tumor composed of tubular and cystic structures with papillary folds projecting into cystic spaces (H and E, ×100) (b) these are lined by two layers of cells with apical secretions (H and E, ×400)

We also came across four cases of pilomatricoma or calcifying epithelioma of Malherbe. It is a tumor with differentiation toward hair follicles, usually seen as a solitary lesion in the face and upper extremities. Microscopically, islands of epithelial cells of two types are seen: basophilic cells and shadow cells [Figure 3].[1,2] Figure 3: Pilomatricoma (a) Grossly, it is a capsulated tumor with a grayish white cut surface (b) Photomicrograph showing basaloid as well as shadow cells (white and black arrow) along with foreign body giant cell reaction (black arrow) (H and E, ×400)

Cylindroma is a tumor where the differentiation in most cases is toward apocrine structures but rarely toward eccrine structures. The tumor is composed of variably shaped islands of tumor cells arranged like a jigsaw puzzle. The islands are surrounded by a hyaline sheath and occasional islands also show droplets of hyaline material [Figure 4]. PAS stain was done to highlight the eosinophilic basement membrane material surrounding the nests of cells in the cases encountered in this study. Figure 4: Photomicrograph of cylindroma showing (a) tumor composed of variably shaped islands of tumor cells arranged like a jigsaw puzzle (H and E, ×100), (b) The islands are surrounded by a hyaline sheath and occasional islands also show droplets of hyaline material (arrow) (H and E, ×400)

Chondroid syringoma, also known as benign mixed tumor of the skin, is an uncommon adnexal neoplasm that usually occurs on the head and neck as in the present series. Tubular or ductal structures of either eccrine or apocrine type are loosely embedded in a myxoid chondroid matrix in the mid-to-deep dermis. The stroma was intensely positive for alcian blue stain in one of the cases. Syringoma represents an adenoma of intraepidermal eccrine ducts. These are usually multiple, small skin-colored papules located usually on the lower eyelids, cheeks, axillae, etc. The tumor is composed of numerous small ducts lined by two layers of epithelial cells. Some of the ducts have comma-like tails, giving a tadpole-like appearance [Figure 5].[1] The only malignant tumor encountered in our series was sebaceous carcinoma. It occurs most frequently on the eyelids as seen in our case. The tumor is composed of irregular lobular formations composed of sebaceous cells as well as undifferentiated cells with moderate-to-marked nuclear pleomorphism [Figure 7].[1] The diagnosis of ATs is not suspected clinically in most of the cases. ATs of the skin present either as asymptomatic papules or nodules, which are suspected to be either keratinous cysts or soft tissue nodules. Hence, the discrepancy between clinical and histopathological diagnosis is often encountered. However, the location, single/multiple lesions, and their distribution can provide important diagnostic clues. In the present study, the concordance between clinical and histopathological diagnosis was found to be 50% approximately. Kamyab-Hesari et al.[16] found a slightly higher (64%) concordance between clinical and histopathological diagnoses. This further stresses upon the fact that histopathology still remains the gold standard for the diagnosis of ATs as the clinical presentation is quite indistinctive. Cytochemical stains such as PAS, mucicarmine, alcian blue, and reticulin may aid in establishing the diagnosis. PAS stain highlights the characteristic eosinophilic globules in a spiradenoma as well as the basement membrane material surrounding the nests of tumor cells and small round droplets in a case of cylindroma. Alcian blue stain helps in demonstrating the intense staining of the stroma in a case of chondroid syringoma.[1,2]

ATs of the skin are rare neoplasms with benign tumors being far more common. They are often misdiagnosed clinically, so histopathology remains the gold standard for establishing an accurate diagnosis of skin ATs.