Dietary fiber (DF), one of the components of foods, consists of arabinoxylans, cellulose and plant components such as lignin, inulin, chitins, pectins, beta-glucans, and oligosaccharides. [1] It is present naturally in a variety of foodstuffs including grains and their by-products, oil seeds, fruits and vegetables and supplemented to others. [2]

Although, fibers are resistant to digestion and absorption in the digestive tract in human small intestine, [3] they undergo complete or partial fermentation in the large intestine resulting in decreased low density lipoprotein, low risk of atherosclerosis and reduction in gastrointestinal transit time. [4]

Gastrointestinal transit time is the interval between consumption of food and it’s elimination as feces. It is a handy indicator of digestive health, and by extension, overall health status. For example, Simpson and Campbell [5] claimed that some soluble fibers may block intestinal mucosal adherence and translocation of potentially pathogenic bacteria resulting in modulation of intestinal inflammation. Also, a population of women with higher ingestion of fibers had lower interlukin-6 and tissue necrotic factor (TNF-α-R2). [6]

Furthermore, study has revealed that the physical nature and type of foods determine the rate of intestinal digestion, absorption and transit. [4] For instance, foods containing insoluble fibers were shown to demonstrate the tendency to increase bulk, soften stool and shorten transit time through intestinal tract. [4] Bond and Levitt, [7] showed that small bowel transit time of wheat bran was greater than that of lactulose.

Site of the experiment

This study was conducted in the animal house of the Department of Physiology LAUTECH, Ogbomoso, Nigeria.

Twenty seven adult female wistar rats weighing 100-130 g were used for the research work. They were divided into three groups consisting of nine animals each. These rats were kept in three different cages with a wire mesh covering. They were fed pelletized grower’s mash ad libitum, provided water through drinking trough and kept under 12 hour light and 12 hour darkness at room temperature.

The study was conducted in line with the guidelines of United State National Institute of Health (NIH) Guidelines for the use of laboratory rats.

Collection and extraction of fiber materials

The stem of Corchorus olitorus and root of Manihot esculenta were purchased at a local Market in Ogbomoso, Oyo State, Nigeria.

Fiber determination of the selected fibers was carried out at Animal Production and Health Department, Federeal University of technology Akure (FUTA), Nigeria, using the standard method of AOAC. [11]

W2 = Weight of crucible and residue after drying (g), and

W3 = Weight of crucible and residue after incineration (g).

10 g of the extracted fiber was mixed with 1gram of eosin dye to form pellets.

The experimental animals were weighed and randomly grouped into:

The animals were fasted for 12 hours before the onset of the experiment after which they were then weighed and fed with the prepared test meal.

The transit time was then expressed as a percentage of the small intestinal tract travelled. The formula is as follow:

The figure shows that Corchorus olitorus fiber is significantly more compared to fiber of Maniot esculenta and the growers mash [Figure 1]. 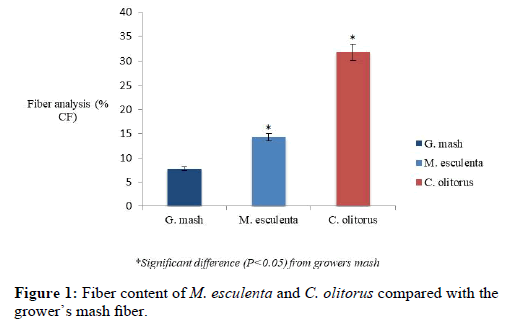 At 90 minutes, there was a significant increase in the percentage travelled by Manihot esculenta and Corchorus olitorus compared to grower’s mash used in control animals (p<0.05). There was no significant difference in the percentage travelled of Manihot esculenta when compared with that of Corchorus olitorus in the experimental rats in 90 minutes (p>0.05) [Figure 2]. 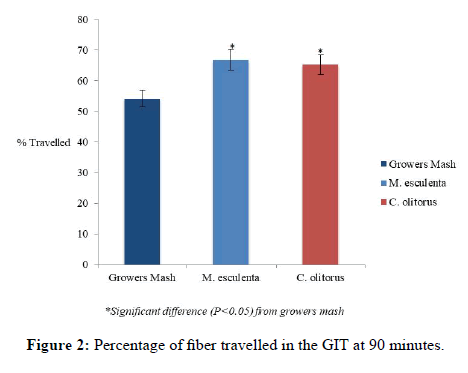 Figure 2: Percentage of fiber travelled in the GIT at 90 minutes. 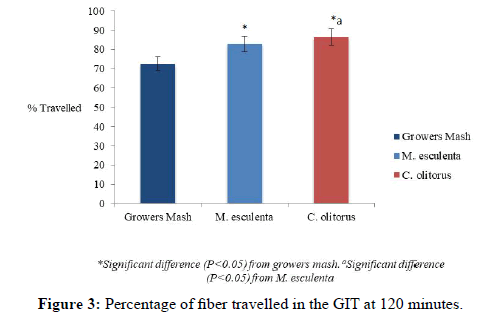 Figure 3: Percentage of fiber travelled in the GIT at 120 minutes. 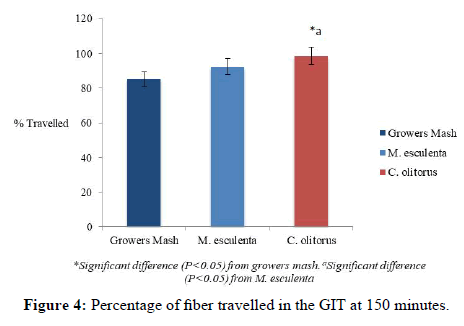 Figure 4: Percentage of fiber travelled in the GIT at 150 minutes.

Studies have documented the advantages of consuming dietary fiber. These include production of healthful compounds through fermentation process, increase in bulk, softening of stool and shortening of transit time through the intestinal tract. [4,13,14] This research work investigated the relative effect of crude fiber of Manihot esculenta over Corchorus olitorius on intestinal transit time using female wistar rats as a model.

Consumption of Corchorus olitorius 90, 120 and 150 minutes postprandial increased % intestinal length covered when compared with grower mash fed group. This was also due to the high crude fiber content of Corchorus olitorius. The short transit time associated with high fiber containing foods has been linked to low risk of colorectal cancer and diverticulosis, increased growth of colonocytes and protection of gastrointestinal mucosa. [8]

In conclusion, the findings of this study show that intake of Corchorus olitorus decreased intestinal transit time than Manihot esculenta.