Applications of Diode Lasers in Periodontics: A Case Series

Now-a-days, almost every specialty area of dentistry is utilizing the powers of laser energy for therapeutic purposes. The diode laser is the most popular soft tissue laser and commonly used in dentistry. A diode laser with wavelengths ranging from 810 to 980 nm in a continuous or pulsed mode is used as a possible instrument for soft tissue surgery in the oral cavity. The 810 nm devices predominate in dentistry, whereas 810 nm is specific for hemoglobin absorption. Diode lasers have many advantages over traditional surgical and therapeutic techniques in addition to providing bloodless surgical and postsurgical course with minimal swelling, scarring, and others things noted are less pain, excellent hemostasis, rapid wound healing and bactericidal action with the minimally invasive procedure. In the present paper, we discuss various uses of the diode laser such as esthetic crown lengthening procedure, excisional biopsy of pyogenic granuloma and gingival pigmentation in dentistry.

Laser is an acronym for “Light Amplification by Stimulated Emission of Radiation.” Laser is a Monochromatic, uni-directional and coherent beam of radiation that is produced by stimulated emission, a state where there are more excited atoms (i.e., more atoms in upper of two energy levels than in lower level), a condition called population inversion to obtain a radiation output greater than the incident radiation. [1] Many lasers with different active media were introduced since the advent of Maiman’s ruby laser. [1,2] Diode lasers are most commonly used lasers in dentistry for soft tissue procedures. The aim of this paper is to highlight the various uses of diode lasers in periodontal surgical procedures.

A 26-year-old male patient was presented with a chief complaint of gummy smile. [Figure 1a] On examination there was compromised smile esthetics because of excessive gingival display on smiling, the smile line was standard, and there is no vertical maxillary excess. The patient is systemically healthy and is not under any medication. A diagnosis of altered passive eruption type 1 sub-group A was made after periodontal examination according to Coslet et al. [3] Esthetic crown lengthening using diode lasers were done using the following settings [Figures 1b, 1c and 1d]. 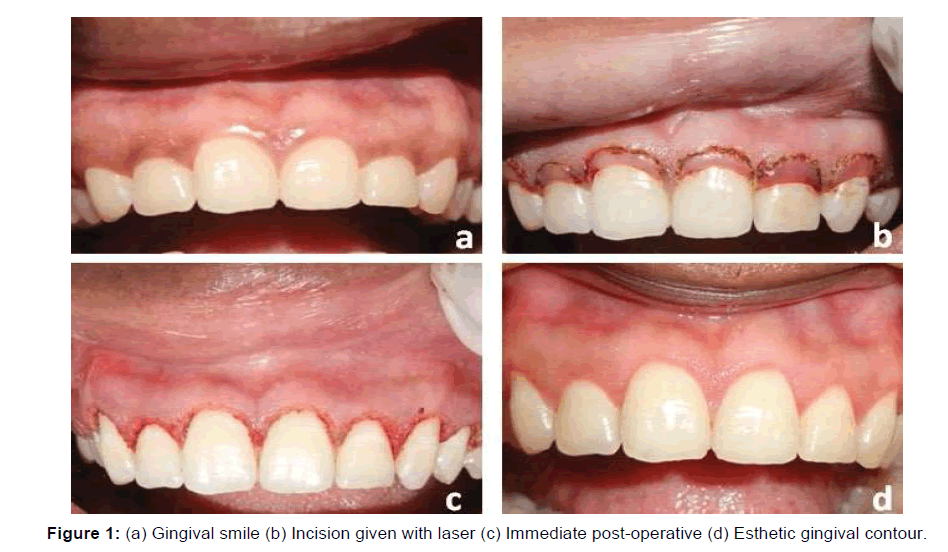 A 29-year-old female patient reported with a chief complaint of swollen gums in the lower front tooth region, the lesion gradually increased in size throughout three months and said occasional bleeding while brushing. [Figures 3a] The patient was systemically healthy and was not using any drugs. Intraoral examination revealed a solitary, sessile lobulated gingival overgrowth extending on lingual surfaces of 42 and 43. It was reddish pink in color with white patches and was approximately 20 mm × 11 mm in size. Oval in shape with overlying surface was smooth. Radiographs like intraoral periapical radiograph showed no abnormalities, and a provisional diagnosis of pyogenic granuloma was made with a differential diagnosis of fibroma, peripheral ossifying fibroma, peripheral giant cell granuloma, and hemangioma. Excision was done using a laser, and the following settings were used [Figures 3b, 3c, and 3d].

We present three case reports that highlight the importance of laser usage in dentistry. Among various lasers, diode laser has become a crucial tool in the dental armamentarium due to its exceptional ease of use and affordability. The key advantage with diode laser is, its wavelength spectrum (810–1064 nm) is well absorbed by melanin, hemoglobin, and other chromophores that are commonly present in periodontal tissues. [4,5] With Diode Lasers the laser energy can be transmitted through a thin fiber as small as 200μ so that it can easily penetrate deep periodontal pockets to deliver its therapeutic effects. [5] Along with these features, it also has the added advantages such as portability, convenience and cost efficiency. Hence it can be easily incorporated into the dental practice. [5]

Diode Lasers are expected to help tissues in an inflamed and/or damaged state, enter the healing and regenerative phases by thorough debridement and decontamination of diseased tissues rapidly, and by modulating or activating cell metabolism in the surrounding tissues. [6,7] In the last decade, it has been suggested that laser irradiation alters cellular behavior by affecting the mitochondrial respiratory chain or membrane calcium channels and that it can facilitate collagen synthesis, angiogenesis, and growth factor release, which eventually accelerate wound healing. [8-12] Diode lasers have been used in the treatment of periodontal disease and have shown complete epithelial removal and irradiation of periodontal pockets has been shown to have an antimicrobial effect termed as bacterial laser reduction. This complete removal of epithelium could delay epithelial down growth and allow connective tissue attachment to occur leading to new attachment. [13]

Currently, there is minimal evidence to support the use of a laser for subgingival debridement, either as a monotherapy or adjunct to SRP. [14,15] However, there are many unique advantages of Lasers in surgical aspects of periodontal therapy such as hemostasis, reduced pain, accelerated wound healing, bactericidal action, and minimally invasive nature. [16,17]

The active medium of the diode laser is a solid-state semiconductor made of aluminum, gallium, arsenide, and occasionally indium; For the most part, the high power diode lasers used in laser medicine, and to pump solid-state lasers, are aluminum gallium arsenide (AIGaAs) lasers that provide a nominal laser wavelength of 800 nm, or indium gallium arsenide (InGaAs) lasers that provide wavelengths around 980 nm. [1,18] Wavelengths are ranging from approximately 400 nm to 25000 nm. In dentistry most commonly used wavelengths are 810 and 980nm. [1] The 810 nm wavelength is specific for hemoglobin absorption; the 940nm wavelength provides a balanced ratio between the light irradiated into the tissue and the absorption by hemoglobin and water; the 980nm wavelength is such that it is specific for hemoglobin and water. [19]

Continuous wave (CW) vs. pulsed. Several studies at that time showed that continuous wave mode at 1W power was enough to reach a bactericidal effect on roots, root canals, and implant surfaces. [16,17,21] Application of 3 to 4 W in continuous modeled very fast to carbonization of the soft tissue which causes higher absorption followed by heavy thermal damage and necrosis of the tissue. To approach better results in soft tissue treatment without much carbonization, it was necessary to interrupt the CW mode. That was done by chopping the CW mode. Pulses down to several 100 μsec were utilized.

Although there is an ongoing debate over the efficiency and costbenefit ratios of using lasers, there are substantial benefits of using a laser especially a diode laser such as reduced pain, hemostasis, and improved patient comfort. Hence lasers may be considered as a boon rather than bane for the dentistry.