Background: Many manuscripts submitted to biomedical journals are rejected for reasons that include lowâÂÂÂÂquality of the manuscripts. Aim: The aim of this study is to identify and characterize the common errors in manuscripts submitted to medical journals based in Africa and Asia. Materials and Methods: Reviewers’ reports on 42 manuscripts were analyzed qualitatively using deductive coding, and quantitatively to determine the errors by sections of the manuscripts. The study included only reviews on full length original research articles. Results: Results showed that 66.7% (28/42) of the manuscripts had flaws in the introduction, 85.7% (36/42) in materials and methods, 66.7% (28/42) in the results, 71.4% (30/42) in discussion, 69.0% (29/42) in references, and 81.1% (34/42) in the general sections. Qualitative analysis of the reviews revealed 22 themes. Most common flaws identified were improper review of literature, provision of insufficient detailed methodology, unsystematic or illogical presentation of results, and unsupported conclusions. Others were inconsistent or nonconforming citations, and lack of good grammatical writing. Conclusions: The results show that many of the manuscripts had remarkable errors and demonstrate the need for attention to detail in study design and manuscript preparation and for further training of medical scientists in the techniques of manuscript writing for journal publication.

Publication in peer reviewed high profile journals appear to be the gold standard in the dissemination of research results. With the continued dependence on publication and its associated quality indices as measures of success in faculty scholarship, many researchers are under pressure to “publish or perish”.[1-3] The result is that many journals are inundated with massive submissions of varying quality for publication. Regrettably, despite the wide publication of manuscript preparation guidelines and uniform requirements for manuscripts submitted to biomedical journals, many of the submitted manuscripts do not meet the standards required for publication in frontline journals, and may be rejected or returned to the author (s) on grounds of quality.[4,5]

Although there are many reasons why a journal may reject a manuscript, the greater majority arise from flaws in study design, manuscript preparation and organization, result interpretation and conclusions, or a combination of these. Peer review is one of the processes journal editors use to sieve out manuscripts that do not meet their journals’ requirements, or to select the best articles from the good, and although several writers question the validity of the peer review process, it is still widely adopted by editors.[6-8] The aim of this study was to analyze reviewers’ reports on manuscripts submitted to biomedical science journals based in Africa and Asia with a view to identifying the flaws indicated by the reviewers of the manuscripts and determining the rates at which these weaknesses occur in the manuscripts. We hoped that this information would be helpful to authors from these regions and that it would provide the basis for the design of intervention training programs for biomedical science researchers in Africa and Asia.

Review reports on 42 full length original research manuscripts submitted to eight biomedical journals based in Asia and Africa between June 2006 and August 2010, were included in the study. These include the Saudi Medical Journal, the Journal of Research in Medical Sciences, the Iranian Journal of Pharmacology and Therapeutics, International Journal of Medicine and Medical Sciences, Journal of Medicinal Plants Research, African Journal of Pharmacy and Pharmacology, African Journal of Microbiology Research, and African Journal of Biochemistry Research. Reviewers for these journals were consulted to obtain informed consent and to provide data. The choice of journals was based on their international outlook, location, and on convenience. Upon consent, the reviewers provided the reports on the manuscripts they had reviewed within the time frame. Reviews on conference abstracts, review articles, opinions, letters, and other articles that were not primary research were excluded. Titles of the manuscripts, authors’ names (where present), and reviewers’ names were removed by the reviewers and replaced with codes to ensure confidentiality. Reviews done on journals’ websites or using journals templates were also removed to avoid copyright issues. The sample size was based on what was available at the time of study and no pre-study calculation of sample size was undertaken. The study protocol was approved by the College Health Research and Ethics Committee of the College of Medicine, Nursing and Health Sciences of the Fiji National University.

Themes identified in the materials and methods section included failure to provide sufficient detail on methodology, failure to indicate sources of materials used for the study, poor organization and/or unsystematic description of methods, inappropriate study design including use of methods that were not appropriate for the study questions, failure to include appropriate controls or standards, poor data/statistical analysis, and lack of evidence of ethical approval from institutional review board, or of informed consent from study participants.

Poorly organized or unclear presentation, discordant and unreliable results, and figures and tables that were of poor quality were the themes identified in the results section. Errors in the discussion were coded into five themes, including failure to discuss the significance of the results, failure to support discussion with appropriate citations, conclusions that were not justified by the presented results, failure to indicate the limitations of the study, and failure to recommend follow up actions on the study. In the references, the two themes identified were citations that were not up to date, and inconsistencies in citation or not complying with the recommended journal style. The reviewers’ reports showed that a large proportion of the reviewed articles lacked good grammatical writing, while a minority lacked scientific validity or originality. Detailed results of the analyses of the flaws are presented in Table 1. 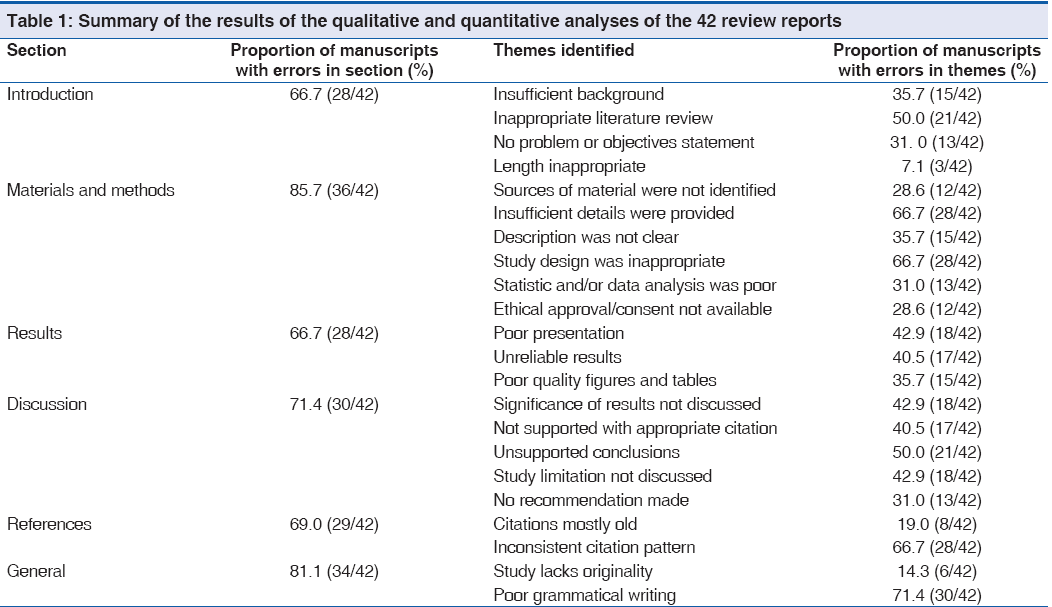 Making it to the press is very competitive given the massive number of manuscripts submitted to biomedical journals annually. For instance, in 2004 alone, the Federation of American Societies of Experimental Biology (FASEB) journal received more than 2000 submissions, and many front line journals publish less than a tenth of their total annual submissions.[9,10] This implies that only the best manuscripts get the attention of editors. This study has shown that a high percentage of manuscripts from Africa and Asia contain significant flaws that could undermine their qualities and chances of acceptance in choice journals. This could in part be responsible for the low research productivity from Africa and East Middle, when this is defined in the terms of the total number of research publications in highly recognized journals.[9,11,12] This underlines the need to further train African and Asian researchers in research design, scientific writing, and academic publishing. A study on the rejection rates of manuscripts from Africa and Asia in comparison to other parts of the world could be insightful.

Most sections of the manuscripts suffered from serious flaws, but the majority of these flaws were noted in the description of methodology, discussion of results, and compilation of references. These results are comparable to the findings of Byrne and suggest lack of painstaking effort on the part of many of the authors.[13] It could be that many do not get to terms with their manuscripts before submission. The observations could be advantageous to authors when preparing their manuscripts. It is noteworthy that the reports indicated that about half of the manuscripts showed inappropriate literature review. This was unexpected in view of the emphasis placed now on review of literature in research design. Authors are therefore encouraged to situate their studies into the context of what is currently known in the fields of their research, as well as be clear on their problem statements and research objectives.

A significant observation from this study is that flaws arising from inappropriate study design and provision of insufficient details in methodology ranked highest. The reasons for the widespread difficulty in this section of manuscripts are not obvious to us. It is probably related to the greater emphasis scientists place on mastering their specific specialties at the expense of understanding research and the nitty-gritty of manuscript preparation. That the researchers were not able to effectively discuss their findings and argue their cases is a cause of concern also. For a decade or so, experiences have shown that weak discussions and conclusions that are not supported by the results were major flaws in research manuscripts, and those observations are supported by the results of this study.[9,13]

Some studies have tried to analyze manuscript flaws by analyzing reviewers’ reports on articles submitted to conference proceedings or by surveying editors and peer reviewers using questionnaires, producing results with varying strengths and weaknesses.[13,14] The novelty of the present study lies in its methodological approach in that it studied reviewers’ reports on full-length research manuscripts, and generated without having this study in mind. It is also novel in the geographical coverage, since to our knowledge, no such study has focused on the African and Asian regions. That we studied eight different journals with different rankings, and that samples were selected over 5 year’s period, also added to its uniqueness and validity.

The number of journals, reviewers, and review reports used in the study may be considered small in comparison to the number of biomedical journals in Africa and Asia, or the large number of submissions to these journals annually, thereby raising questions of external validity. Notwithstanding the perceived limitations, the findings highlight important issues in research and publication that affect scholars in Africa and Asia, and could be a useful reference to improve study design and manuscript preparation. 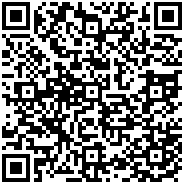