Background: Even though much advancement in the medical field, diagnosis of diabetes mellitus (DM) needs an invasive procedure for drawing of blood and estimation of blood sugar levels. The purpose of this study was to analyse the glycogen content in exfoliated cells of oral mucosa as an adjunct in the diagnosis of diabetes mellitus. Aim: To assess the number of PAS (Periodic Acid Schiff) positive glycogen containing cells in oral smears and correlating the findings with random blood sugar levels. Subjects and Methods: Smears were taken from buccal mucosa of 60 type II diabetes mellitus patient and 60 healthy individuals. The smears were stained with Periodic Acid Schiff stain. Each smear was screened for 100 random cells and number of PAS positive cells was noted. Based on the staining intensity of the cells, PAS positive cells are categorized as intense, moderateand mild PAS positive. Numbers of PAS positive cells were correlated with serum glucose levels of each patient. Statistical analysis used is Student T test and Pearson correlation. Results: Student t test and Pearson correlation was conducted which reveals Intense and moderate PAS positive cells was significantly higher (p<0.001) in the study group and also has significant correlation with random blood sugar levels and total PAS positive cells. Conclusion: Correlating the obtained results suggests that random blood glucose levels are one of the factors responsible for the increased glycogen positive cells from oral smears. Demonstration of increased PAS positive cells can be used as a non-invasive diagnostic screening tool for DM provided the study is repeated with larger sample of subjects.

Diabetes mellitus is fast growing and a potential epidemic in India with more than 62 million diabetic individuals currently diagnosed with the disease. [1] According to Wild et al. the prevalence of diabetes is predicted to double globally with 171 million in 2000 to 366 million in 2030 with a maximum increase in India. [2]

Frequent monitoring the blood glucose levels in a diabetic patient involves invasive procedure to draw the blood such as venipuncture and finger lancing which is painful. Due to above reasons a simple non-invasive or minimal invasive monitoring are gaining interest in present situation. One such technique is exfoliative cytology which is simple, rapid, inexpensive, bloodless and painless procedure in which physiologically exfoliated cells from the mucous membrane are used as efficient diagnostic adjunct in varied oral lesions with better patient acceptability. [8-11] The purpose of this study is to demonstrate glycogen in exfoliated cells of buccal mucosa in type II diabetics and correlate the obtained results with serum glucose levels to establish exfoliative cytology as a diagnostic adjunct in diabetes mellitus. We also have assessed the additional finding of fungal positivity in the oral smears stained with PAS and also their relation with serum glucose levels.

This is a case control study which was conducted in the Department of Oral Pathology and Microbiology, Vishnu dental college, Bhimavaram, Andhrapradesh, India. Total of 120 subjects were taken into consideration of which Study group consisting of 60 (33 females and 27 males) known type II Diabetic patients with the disease duration ranging from 1 year to 12 years. Control group consist of 60 healthy, age and sex matched subjects. Patients with habits, oral lesions and other systemic disorders were excluded from the study. Patients were explained about the study, informed consent was obtained and detailed case histories with duration of disease, medication were recorded.

Examination of oral cavity was done; patients and controls were asked to rinse the mouth thoroughly with water. Scrapings were taken from buccal mucosa using a disposable wooden spatula by exerting gentle pressure. The scraps were smeared on to the clean, fresh and non-greasy slide in a circular pattern over a large area preventing clumping of cells. The slides were immediately fixed using liquid spray fixative (Biofix). All the slides were stained with Periodic Acid Schiff (PAS) technique. The obtained variables were then compared with serum glucose levels of each patient. Student t test and Pearson Correlation was used to assess the statistical significance among the variables of the test and control groups.

The study group included 45% males and 55% females with an age range of 35-65 years. Study group consisted of patients with history of diabetes ranging from 1 to 12 years. Fifty percent of patients had the disease duration for less than 5 years. All the patients were under oral hypoglycemic. RBS levels in the study group ranged from 124 to 245 mg/dl, with an average of 186.60 ± 60.71 mg/dl.

Student t test done for the variables compared between study and control groups were strongly significant with p value of less than or equal to 0.001 except for the total moderate PAS positive cells with p value of 0.021 which was also significant.

Diabetes mellitus is the most common endocrine disorder distinguished by increase in blood glucose levels due to relative or absolute insulin deficiency which needs routine monitoring of blood glucose for effective management and prevention of complications. Monitoring of blood glucose levels is an invasive method, which is a costly and time consuming. Exfoliate cytology is non-invasive technique having good patient compliance, cost effective and an effective method for screening large populations. [8-11]

Glycogen, the primary storage form for glucose in mammalian cells acts as energy reserve, the formation of which is regulated by insulin, adrenaline and glucagon hormones. These hormones fail to break down glycogen, leading to accumulation of glycogen in the cells and tissues. [12,13]

Varying amount of glycogen is found in upper layers of normal buccal mucosa especially in prickle, granular and surface cells excluding basal and Para basal layers [Figure 5]. The glycogen rich cells were most pronounced in the regions over the rete ridges [14,15] but the glycogen in the epithelial cells decreases in hyperkeratosis and leukoplakic mucosa. [16] Histochemical study of diabetic gingiva revealed more widely distributed intensely reactive PASpositive material when compared to non-diabetic controls. [17] 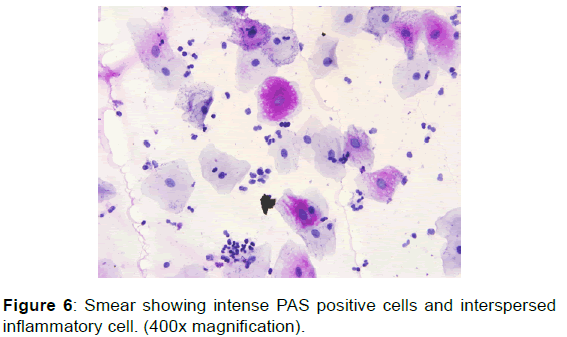 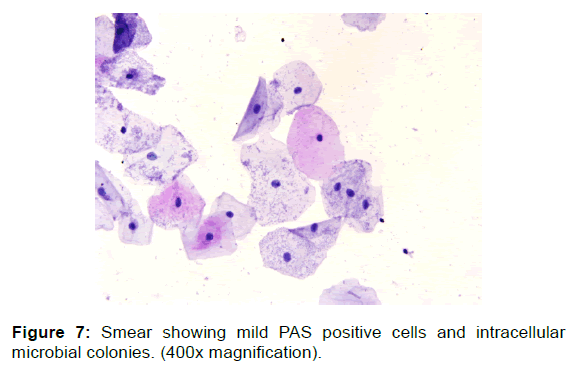 Oral candidiasis is the most common and prevalent among diabetics than in non-diabetics. [25] Among 60 PAS stained smears of diabetics considered for the study only 3 smears revealed candida hyphae of which 1 smear showed high amount hyphae. When random blood sugar levels and candidal hyphae were compared, we found increased amount of hyphae [Figure 8] in patient with increased RBS levels.

Exfoliative cytology is one of the non-invasive and patient friendly procedures which have good patient compliance, rapid, cost effective method for screening of large group of population. Routine screening of blood glucose in diabetic patients is necessary to maintain and prevent the complications occurring secondary to the diabetes. From the results of study conducted reveal that exfoliative cytology in conjunction with PAS staining can be used as an adjunctive diagnostic aid for routine chair side screening which is a noninvasive technique which can bypasses the multiple venipuncture’s and pain associated with it for the diabetic patient. However, the study with larger samples should be conducted to come to a definitive conclusion.

We all thank our teachers and well-wishers Dr. T.R. Saraswathi, Dr. C.R. Ramachandran for their continuous guidance and support throughout the study period