Background: Tubercular lymphadenitis is one of the most common causes of lymph node enlargement in developing countries. Fine needle aspiration cytology (FNAC) plays an important role in diagnosing Tubercular lymphadenitis and prevents unnecessary surgical intervention. Aim: To study the cytomorphological patterns of tubercular lymphadenitis in our study population and correlate the bacillary load by acid fast staining with cytomorphological patterns. Materials and Methods: A total of 150 cases of cytological proven granulomatous lymphadenitis and cases without granuloma, but positive acid fast bacilli (AFB) on Ziehl Neelson (ZN) stain were included in our study. Cytomorphological patterns were categorized into four patterns. Pattern A – Epithelioid granuloma without necrosis, Pattern B – Epithelioid granuloma with necrosis, Pattern C – Necrosis without epithelioid granuloma with neutrophilic infiltrate. Pattern D – with numerous macrophages. Chiâsquare test was done to correlate cytomorphological pattern and bacillary load. A 2 × 2 analysis was done to test the degree of one hypothesis. A P < 0.05 was considered as significant. Results: Patterns and the number of cases observed are as follows: Pattern A – 29 cases, Pattern B – 84 cases, Pattern C – 34 cases. A distinct D Pattern with abundant foamy macrophages was seen in three immunodeficient patients. Positive ZN staining was seen in 81/150 54% of cases. The cytological patterns of AFB positive cases Pattern A: 6/29 (21%), Pattern B: 46/84 (55%), Pattern C: 25/34 (73.5%), Pattern D: 4/4 (100%). Conclusion: FNAC is useful in diagnosing tubercular lymphadenitis. Maximum bacillary load was seen in Pattern C. A distinct D Pattern was seen in immunodeficient patients.

Numerous diagnostic methods such as fine needle aspiration cytology (FNAC), culture, polymerase chain reaction and histopathological examination of excised node have been advocated for confirmation of tubercular lymphadenitis. However, FNAC is a routinely done cytological technique in diagnosing tubercular lymphadenitis as it has sensitivity and specificity of 88-96%. FNAC is economical and rapid as compared with culture studies (considered as gold standards but time consuming and require skill) and polymerase chain reaction (expensive, needs training).[2]

This study was carried out in the Department of Pathology at our Institute, a tertiary care hospital catering medical services to the rural population. Institutional ethical clearance was obtained before the start of this study. Ours is a retrospective study, which included 150 cases of cytological proven cases of granulomatous lymphadenitis and cases positive for AFB, morphologically resembling tubercular bacilli were taken up for the study. Informed consent was taken from the study group before fine needle aspiration procedure. Details such as age, sex, group of lymph nodes involved, presence or absence of matting, type of aspirate obtained on FNAC were retrieved from the files. Patients with the presence of Pulmonary Koch’s, atypical mycobacterial infection, Bacillus Calmette-Guerin lymphadenitis, periodic acid-schiff positive organisms on cytology smears were excluded from our study. Papanicolaou’s (correct) stain, hematoxylin and eosin stain, May Grunwald Giemsa stained smears were used for interpretation and categorization of cytomorphological patterns of granulomatous lymphadenitis. ZN stained smears were used for screening of AFB and categorization. Cytologically, all cases were categorized into three categories as suggested by Das et al.[6] The three cytomorphological patterns were: Pattern A – Epithelioid granuloma without necrosis [Figure 1a], Pattern B – Epithelioid granuloma with necrosis, Pattern C – Necrosis without epithelioid granuloma with neutrophilic infiltrate. [Figure 1c] A Pattern D with numerous macrophages was also added later. ZN stained AFB positive smears were categorized into three groups as follows: Cases with a large number of bacilli arranged in bundles detected under × 10 magnification were graded as 3+ [Figure 1d], cases with singly scattered AFB were graded as 2+, those with occasional bacilli were graded 1+[7] Serology for HIV, whenever done was by using enzyme linked immunosorbent assay.

Statistical Package for the Social Sciences version 14 (Chicago Il,USA) correct was used for descriptive statistics, Chi-square test was done to test the significance and 2 × 2 analysis was performed to test the degree of one hypothesis. A P < 0.05 was considered as significant.

Patient’s age ranged from 2 years to 75 years in 150 cases of tubercular lymphadenitis. The distribution of cases in various age groups is represented in Figure 2. Maximum numbers of cases were seen in the age group of 21-30 years followed by 11-20 years and 31-40 years. 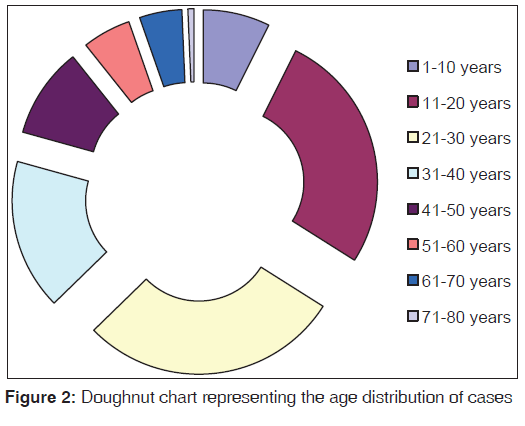 Cytological patterns in all 150 cases were as follows: Pattern A – 29, Pattern B – 84, Pattern C – 34. Pattern D was seen in three cases where numerous foamy macrophages [Figure 1c] were seen along with the presence of numerous neutrophils.

We aspirated grey white purulent material on FNAC in 13% of cases. Nearly, 68% of these cases showed AFB on ZN staining positivity.

The cytological patterns of AFB positive cases in three categories were as follows:

Significant statistical difference was seen among the three groups cytological patterns and AFB positivity (P < 0.001 and χ2 = 23.14). A 2 × 2 analysis was performed to test the degree of one hypothesis and it was found that Pattern B was associated with 1 + AFB while the pattern with numerous macrophages was significantly associated with 3 + AFB load.

It was Dudgeon and Patrick in 1927 who first used FNAC in diagnosing TB lymphadenitis followed by Tempka and Kubiczek, Mahanta et al.[8] In our hospital, a rural tertiary care center tubercular lymphadenitis constituted 39% of all lymph node aspirates forming the most common cause of lymph node enlargement.[9] The cytological pattern and bacillary load to a certain extent denotes the immune status of an individual.[7] Maximum number of cases was in the age group of 21-30 years followed by age group of 11-20 years and 31-40 years. A declining trend was seen in the geriatric population. Ahmad et al., have also described similar trend.[10] Studies conducted by Rajashekaran et al., have shown that no group was exempted from tubercular lymphadenitis,[11] This is also true in our study. This may be attributed to the development of cell mediated immunity against tubercle antigens in elderly patients not suffering from any comorbid diseases such as diabetes mellitus, malnutrition.

AFB positivity was seen in 53.3% of cases. Varying AFB positivity has been described by many s authors ranging from 35.6% to 55.2%.[6,12] In our study, we observed AFB positivity in 68% of cases where purulent material was aspirated. Prasoon have also described association between bacillary load and purulent aspirate.[13]

Further when purulent material is aspirated from lymph node of elderly patients a thorough search must be made for squamous cell carcinoma deposits as these deposits can cause liquefactive necrosis of lymph nodes resulting in greenish discharge.[9] In our study, we did not face such dilemma as in most of our patients of squamous cell carcinoma primary lesion was grossly visible in the oral cavity.

Comparisons of AFB positivity with study by Das et al.,[6] is represented in Table 1.

The pattern of immunologic response to mycobacterium TB is mainly due to delayed Type IV hypersensitivity, which is usually expressed 2-4 weeks after primary infection. There is secretion of Th1 cells, cytokines (γ interferon) and tumor necrosis factor – a by activated macrophages. These macrophages aggregate around the lesions center to form a granuloma and effectively neutralize the bacilli without causing further tissue destruction. Necrotic material seen in the central part is the caseous necrosis. When the macrophage activation is weak, tissue destruction occurs. The lesion enlarges further and the surrounding tissue is destroyed. The central necrosis starts liquefying and this contains abundant bacilli. Thus, granulomatous reaction with little or no necrosis would be associated with few bacilli while reactions with hardly any or no granuloma would be expected to show more AFB.[12] The above data strongly supports our study.

Our study had four cases of HIV positive patients where all of them were AFB positive. Out of four aspirates three had a unique pattern of microscopic appearance where the aspirates were purulent with no typical granuloma, but had numerous foamy macrophages. Rajasekaran et al., opine that the absence of typical epithelioid granuloma in immunosuppressed cases usually occurs in late/advanced HIV disease with severe suppression of CD4+ cells.[11]

Das et al., have described only three patterns depending on the cellular components as they represent a spectrum in natural history and progression of TB lymphadenitis.[6]

1. Epithelioid granuloma without necrosis with appreciable number of lymphocytes.

In our study, we followed the classification of Das et al., However, we added an additional Pattern D with numerous macrophages in accordance with features described by Rajashekaran et al.[6,11] Further it is also important to look into the bacillary load in all cases of granulomatous lymphadenitis. The presence of foamy macrophages would help us in deciding upon the immunity of the patients.

FNAC is a useful tool in diagnosing tubercular lymphadenitis. Patient is usually exempted from surgical biopsy of lymph node after a cytological diagnosis of tubercular lymphadenitis as these swellings will reduce in size after a course of treatment with anti-tubercular drugs. Maximum number of granulomatous lymphadenitis is seen in the age group of 21-30 years with a decreasing trend in elderly. There was a female preponderance of cases. The purulent aspirate showed significant AFB load. Most of the AFB positive cases belonged to Pattern C with necrosis and neutrophilic infiltration. Pattern D with abundant macrophages and high bacillary load was seen in immunodeficient patients.