Background: In normal physiology, there is a dynamic equilibrium between reactive oxygen species (ROS), activity and antioxidant defense capacity and when that equilibrium shifts in favor of ROS, oxidative stress results which leads to periodontal diseases. Advanced oxidation protein products (AOPP) are proteins, predominantly albumin and its aggregates which are damaged by oxidative stress. Fluoride ion at molecular level is related to the production of free radicals and an alteration of the antioxidant defense mechanism. So a study was conducted to estimate the salivary levels of AOPP among healthy, chronic periodontitis (CP) subjects and chronic periodontitis subjects with dental fluorosis (CP-F). Methods: Total 90 subjects were selected and divided into three groups based on clinical parameters group I: 30 healthy subjects, group II: 30 C.P subjects, group III: 30 CP-F subjects, Saliva samples were collected and AOPP levels were determined by U V- spectrophotometry at 340 nm. Results: Salivary levels of AOPP were highest among C.P with dental fluorosis compared to C.P and healthy individuals which were statistically significant. Conclusions: Dental fluorosis can act as an adjunct along with AOPP in contemplating it as a diagnostic indicator of oxidative stress in periodontal disease and aid early planning of treatment modalities.

Fluoride plays a dual role in human nutrition, preventing dental caries as well as at higher level of ingestion causing dental and skeletal fluorosis. [1] Dental fluorosis is a condition which is said to be present when there is morphologic alteration in the features of a tooth, in the form of discoloration or anatomic malformation which is attributed to the developmental changes induced by excess fluoride levels in plasma at the time of tooth formation. In India itself, an estimated 60 million people are at risk and 6 million people are disabled. [2] Dental fluorosis is known for the changes it induces in the hard tissues of the body but not much attention has been given to its relation with the surrounding periodontal structures. Similarly, even though a limited study does consider the prevalence of periodontitis in fluorosis subjects. [3,4]

Studies suggest that there is a strong association of occurrence of periodontal disease in high-fluoride areas. [5] It also contributes to genetic alterations inducing up-regulation and downregulation of genes. [6] Its influence on MMP-20 is known for it to contribute to dental fluorosis in rats. [7] Considering all this evidence, it can be said that fluorosis has the potential not only to influence the periodontium cytologically but molecularly as well, thereby modifying enzymatic actions as wells as protein formation. Surface roughness, after analyzing with atomic microscopy revealed surface roughness is exceedingly high in fluorosis subjects with roughness increasing with degree of fluorosis. [8] This surface roughness is conducive for the bacteria to survive as well as make it difficult for scaling and root planning in fluorosed teeth. This could also jeopardize the effectiveness of the regular oral hygiene procedures. The increase in ROS induced by NaF suggests that fluoride causes a higher degree of oxidative stress and extensive cellular damage in tissues. [9]

Over the past few years, strong evidence has emerged to implicate oxidative stress in pathogenesis of periodontitis. Free radicals and reactive oxygen species (ROS) are essential to many normal biological processes. At low concentrations, these free radicals stimulate the growth of fibroblast and epithelial cells in culture, but at higher concentrations it may result in tissue injury. [10] Chronic periodontitis (CP) is chronic disease considered as a complex immuno-inflammatory disease characterized by an exaggerated host response leading to enhanced Reactive oxygen species (ROS) production by peripheral neutrophils. Since molecular products from oxidative stress are generally more stable than oxidants themselves, ROS measurements often involve determining levels of their oxidation target products. [11]

These products originate when hypochlorous acid (HOCL) along with other chlorinated oxidants like (OCL-) react with protein compounds. HOCL is formed by the enzymatic action of myeloperoxidase which catalyses the reaction of chloride ion with hydrogen peroxide. [14] AOPP are recognized as markers of oxidative damage to proteins, related to intensity of oxidative stress and inflammation.13 Serum AOPP levels increase with progression of chronic diseases and it has been used as inflammatory marker for liver cirrhosis and chronic renal failure. [14-16]

The well-established relation between AOPP response and inflammation suggests that it is the best marker or monitoring fluoride mediated oxidative stress damage on periodontal structure. To date there have been few studies of the effect of Fluoride on periodontal health. Therefore, the main objective of this research was to investigate the effect of fluoride in the pathogenesis of periodontal disease by quantification of AOPP levels.

The present cross-sectional study was conducted on 90 individuals of age between 18-60 years, who reported to the outpatient department of Periodontics, P.M.N.M. Dental College & Hospital Bagalkot. The research protocol was reviewed and approved by the Institutional Ethical Committee. A written informed consent was obtained from all the selected patients prior to commencement of the study.

After clinical examination the subjects were divided in 3 groups. Group I consisted of healthy subjects showing absence of clinical and radiographic manifestations of periodontal disease, at least 20 teeth present with a GI score < 1 and absence of loss of attachment, Group II comprised the subjects diagnosed as chronic periodontitis having minimum of six teeth with periodontal pockets of PD>5 mm & Clinical attachment loss CAL >3 mm & GI>Group III consisted of subjects fulfilling the criteria of group II in addition to having dental fluorosis (dean’s criteria mild to severe)

Exclusion criteria included subjects with history of any systemic diseases or conditions and with any apparent oral infections (i.e., Herpes or Candida). Any injuries or bleeding in the oral cavity unrelated to gingivitis or periodontitis, intake of antibiotics or anti-inflammatory drugs within 6 months prior to the study were excluded from the study. Pregnant or lactating women, subjects with history of smoking or any form of tobacco and alcohol consumption and individuals who had received any periodontal treatment in the past six months prior to the study were also excluded from the study.

Subjects were instructed not to eat or drink one hour before the time of saliva collection. Patients were explained about the study and required appointment was given for saliva sample collection. Unstimulated whole saliva was collected between 10am and 12 Noon to avoid diurnal variation. [17] Patients were seated on dental chair and were instructed to rinse with water to void of the previously collected saliva. The patients were asked to allow saliva to accumulate in the floor of the mouth for a minute and to spit without stimulation into the screw top tube. Prior to analysis, saliva samples were centrifuged at 4000 rpm for 10 min. The supernatant fraction was then aliquotted into storage vials and kept at -800C until required for biochemical analysis. [18]

Salivary AOPP levels determined using a spectrophotometric method given by Witko-Sarsat et al. Briefly 200 μL of saliva was incubated with 20 μL of glacial acetic acid. The absorbance was read immediately at 340 nm. AOPP concentration was expressed in μmol/ml on the basis of the calibration curve of chloramine-T with potassium iodide. [16]

All the samples in each group, tested positive for AOPP and the study showed an increased concentration of salivary AOPP in chronic periodontitis with fluorosis patients and chronic periodontitis patients compared to healthy individuals which were statistically significant with p<0.05 as shown in Figure 1. When AOPP levels are correlated with clinical parameters a significant positive correlation was found between levels of AOPP with GI, PD, CAL, and Modified deans fluorosis index [Table 1]. 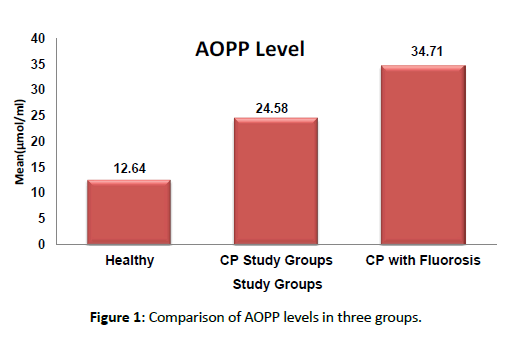 Oxidative stress is a misbalance between the production of free radicals and antioxidant status leading to oxidative damage of macromolecules including lipids and proteins. This imbalance between the ROS-AO has been implicated as one of the progressive or pathogenic factors for periodontal disease. [19]

Previous studies have shown that AOPP plays a dynamic role in complex patho-physiology of oxidative stress and inflammation. But the mechanisms by which AOPP accelerate inflammation remain to be investigated. [20] AOPP is generated by different oxidation patterns, which might lead to production of reactive oxygen species such as hydrogen peroxide. These ROS secondarily leads to increased inflammatory reaction by signaling activation of NF-Kβ which stimulates pro-inflammatory cytokines release through depletion of intracellular thiol compounds. This could possibly explain higher levels of AOPP found in chronic periodontitis groups as compared to healthy individuals. [21,22] Fluoride exposure increase the generation of anion superoxide (O2 -); increased O2 - concentration and its downstream consequences such as hydrogen peroxide, peroxynitrite, hydroxyl radicals seem particularly important in mediating fluoride’s effects. [23,24] Fluoride is thought to inhibit the activity of antioxidant enzymes such as superoxide dismutase (SOD), glutathione peroxidase, and catalase often resulting in the excessive production of ROS at the mitochondrial level, leading to the damage of cellular components. [23-25]

In present study increase in AOPP level was seen in chronic periodontitis with fluorosis group compared to other groups. The findings in our study keep in tract with the observations found by Piwowar A, who described that AOPP formation is induced by intensified glycol-oxidation process, oxidant antioxidant imbalance and coexisting inflammation. [26] So from our study it is reasonably to predict that fluoride causes an increase in oxidative stress and has a role in periodontal disease. As this was the first study determining the levels of AOPP among periodontitis and periodontitis with fluorosis subjects, a direct comparison with other research was not possible. There is a long list of laboratory methods available in the literature that are in use in establishing the presence of oxidative stress, but none of them proved to be unequivocally superior to the others until now. Sometimes they are used in combination with each other, but financial considerations strongly limit this practice in routine diagnostics. AOPP are just one of those techniques. It is suggested that the AOPP shows immense importance as an oxidative stress biomarker. [27]

The well-established relationship between AOPP response and induced damage makes this simple, fast and inexpensive technique applicable in daily routine practice for measuring oxidative stress mediated damage in chronic inflammatory conditions. The results of this research lay emphasis on the need for studies with large sample size to authenticate the impact of fluoride on periodontal disease and AOPP Levels. We only hope that these studies will encourage further research in this direction and help in better understanding of the relationship between the fluorosis and periodontal disease.

It is concluded from our study that there is direct association between high AOPP levels in fluorosis subjects and periodontal disease. Fluoride causes dental and skeletal changes in people residing in endemic fluorosis area so action needs to be taken to counteract these problems. Increased AOPP levels could be used as early diagnostic marker to predict the activity and severity of the disease. The simple chair side test for AOPP can be a valuable tool in periodontal disease diagnosis and early planning of treatment modalities.