Cancer Esophagus (CE) is the eighth most common cancer worldwide, with an estimated 456,000 new cases in 2012 and the sixth most common cause of death with an estimated 400,000 deaths. CE has overall ratio of mortality to incidence of 0.88 [1]. Only 20% of the patients present with disease localized to esophagus, remaining having either locally advanced or metastatic disease. Concurrent chemo radiotherapy is standard of care for locally advanced cancer esophagus despite showing 50 % local failures. Survival rates of 25% to >35% at 5 years have been attained using array of treatment approaches however prognosis these patients remains poor despite recent advances in treatment delivery.

• Overall response rate on the basis of Subjective and Objective parameters.

It was a Hospital Based Prospective Randomized Concurrent Parallel Open Labelled Two Arm Study. After approval from Institutional Ethics Committee, 60 patients were enrolled in this study, 30 in each arm. Biopsy proven, non-metastatic (Stage I/ II/III) squamous cell carcinoma of middle 1/3 esophagus (as per anatomic classification) with ECOG performance status 0-2 and were included for study.

EBRT Boost was given by three field technique (one anterior and two posterior oblique fields). Arm A was given 14.40 Gy in 8 fractions, 180 cGy per fraction, 5 fractions per week total duration 1 ½ week. Arm B receiving 12 Gy in 4 fraction of 300cGy for 1 week.

Overall (Tumor) response assessment in objective manner was performed by barium swallow, CECT Thorax and Upper GI Endoscopy at 1 month after completion of treatment. Patients were asked definite set of questions as per EORTC OES 18 Questionnaire to compare Quality of life parameter “Dysphagia”. Seven sub-scales were created to facilitate assessment. The monitoring of Toxicity was performed according to the Radiation Therapy Oncology Group criteria and the National Cancer Institute Common Terminology Criteria and Adverse Events (CTCAE) version 3.0.

Statistical software STATA 10.1 (2010) was used for analysis. Continuous variables were presented as mean ± SD (standard deviation). Comparison within one arm, before and after intervention was compared using paired t- test while two arms were compared with each other using unpaired t- test. All Categorical variables compared by using Chi-Square test. 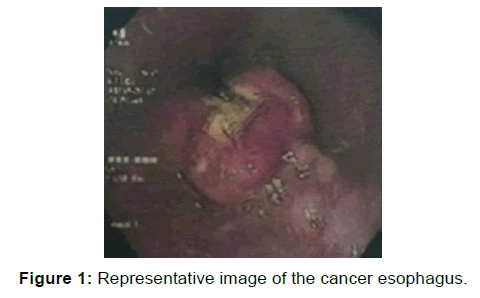 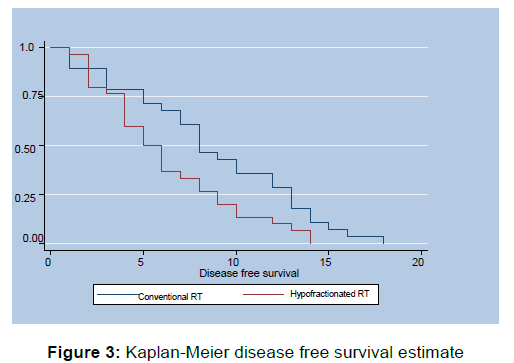 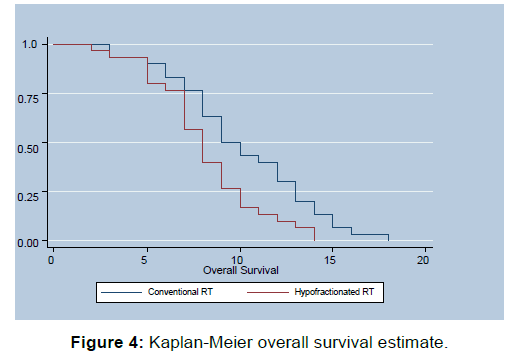 Table 3: Various subscales of EORTC-OES18 questionnaire compared (BT- before treatment, AT- after treatment).

The prognosis for patients with carcinoma of the esophagus remains poor despite recent advances in combined-modality therapies. At one hand definitive concurrent chemoradiotherapy achieved median survival and overall survival at 5 years on par with standard surgical management with better quality of life but at other end continued to show local failure as major cause of failure with approximately 50% of patients failing locally [3,4]. Median survival of 14 to 20 months and 5-year survival rates of 20% to 30% were achieved with chemoradiation alone [4-7]. These findings indicated that conventional fractionation scheme produced radiobiologically less tumoricidal effects for radioresistant CE [8]. Recent literature reported that radiation increased the expression of cancer stem cells markers for radiation resistance which could lead to the local failure [9-11]. Trials have indicated hypofractionated radiation offered a clear advantage over conventional radiation, especially in local control [9-12].

A HRT schedule delivers a dose larger than 2 Gy per fraction (with a lower overall dose). Hypofractionation can achieve improved therapeutic index in one of two ways when compared with the conventional fractionated scheme [13].: (i) dose escalation to increase tumour control (ii) maintaining dose equivalence in terms of tumour cure probability while decreasing the normal tissue dose. Number of other advantages is conferred in terms of logistical, patient convenience and resource allocation considerations [14]. Reduced numbers of fractions will reduce radiotherapy costs in terms of work-hours and fewer fractions also results in fewer visits which is more convenient and less costly [15].

In present study, we observed a male preponderance with a male to female ratio of 1.4:1, with majority of cases in the age group of 40-65 years which was in accordance with Indian studies exploring demographic profile of Oesophageal cancer [21-24]. Length of lesion on barium swallow is proven prognostic factor for survival in esophageal cancer [25,26]. This important prognostic factor was well matched between two treatment Arms. Upper GI Endoscopic disease characterization revealed either ulcerative, proliferative, ulcer proliferative growth. Both the Arms were comparable with respect to distribution of tumor growth characterization.

Though non-significant, but there was better trend in adherence to treatment protocol in conventional fractionation arm as evidenced by 70% of patients taking treatment regularly in Arm A Vs 53.33% patients in Arm B. Both Arms were well matched with respect to patient completing intended treatment in stipulated duration (p-value=0.606), NS.

Improvement in weight in CRT Arm was statistically better than results observed in HRT Arm. Positive change in swallowing capacity was comparable in both arms (p-value=0.284), NS, but better trend of this change was improved in HRT Arm. This can be attributed to proven effect of higher dose RT for relieving dysphagia which is commonly used in Palliative setting.

Objective response assessment was done using Barium swallow, CECT Thorax and Upper GI Endoscopy. In case of discrepancy of results, findings of Upper GI Endoscopy were considered benchmark since after resection or radiotherapy for esophageal carcinoma, the normal soft tissue planes in the mediastinum are altered or obliterated and recurrent/residual tumor can be very difficult to identify in this setting [27]. Overall tumor responsein the study was comparable (p-value=0.781), NS. Both the Arms were comparable for locoregional failure (40% vs 46.67%) and distant failure (20% vs 23.33) with p-value of 0.602 and 0.754 respectively.

Since last two decades there is growing interestin broadening the evaluation criteria employed in cancer clinical trials i.e., Quality of life (QOL) during the limited survival time. Dysphagia has an overwhelming influence on patient’s quality of life, hence in this study we assessed dysphagia related parameter, using EORTC OES-18 module. Literature review pertaining to quality of life in esophageal cancer patients undergoing concurrent chemoradiotherapy is scarce. Analysis between two Arms revealed, except choking and coughing scale all other scales showed statistically significant improvement for CRT (Arm A) as compared to HRT (Arm B).

Median Overall Survival in Arm A was 9.5 months while for Arm B it was 8 months. Overall Survival Analysis generated utilizing Kaplan-Meier Method showed statistically significant better OS for Arm A as compared to Arm B Log rank value- 0.110, (p-value=0.001), HS.

These results were contradictory to study done by Ma JB [28]. 3- and 5-year survival rates (43.2% and 38.8%, 38.2% and 28.0%, respectively) were not significantly different between the Hypofractionated and Conventional schemes (P=0.268). This can be attributed to limited follow up period of 1½ years, utilization of different chemotherapy molecule and adjuvant chemotherapy post concurrent chemoradiotherapy in reference study.

In both Arms no patient had late toxicity in form of radiation pneumonitis, stricture/stenosis.

Hypofractionation in Cancer Esophagus is the need of the day because of advanced stage of disease at presentation, need of palliative treatment in most of the cases and better resource utilization. Even though, this study showed better results with respect to Quality of Life, Disease Free Survival, Overall Survival, and Toxicity Profile for Conventional Radiotherapy as compared to Hypofractionated Radiotherapy, overall (tumor) response was similar in both Arms. Hence it will be worthwhile to see the results of Hypofractionated treatment protocol in Cancer esophagus with large number of patients, longer follow up and modern radiation delivery techniques which may truly establish the role of Hypofractionated Radiotherapy. Till then concurrent chemoradiation should be standard of care in locally advanced middle third cancer esophagus.