Background: Macrosomia is defined as birthâÂÂweight over 4,000 g irrespective of gestational age and affects 3âÂÂ15% of all pregnancies. Aim The present study aimed to determine the relationship between mother’s characteristics and macrosomic births and also compare macrosomic and normal newborns regarding the maternal and offspring complications of diabetes during pregnancy. Subjects and Methods: In this case control study, among the 420 consecutive births occurring in public and private hospitals of Shiraz, Iran from October 2006 to March 2007, the data of 32 macrosomic and 128 normal newborns were analyzed using tâÂÂtest and chi square in bivariate and logistic regression in multivariate model. Results: The mean (SD) of neonate weight, height, and head size was 3323.4 (709), 48.95 (3.2), and 34.9 (1.8), respectively. Regression analysis showed that gestational diabetes (Odds Ratio (OR): 11.9, Confidence Interval (CI): 4.6âÂÂ30.3), preeclampsia in the pregnancy period due to diabetes (OR: 3.81, CI: 1.1âÂÂ13.2), and macrosomic birth history (OR: 3.3, CI: 1.04âÂÂ10.4) were the main predictors of macrosomia. Moreover, macrosomia increased neonate hypoglycemia (OR: 4.7, CI: 1.4âÂÂ15.8) and section delivery (OR: 4.1, CI: 1.27âÂÂ13.1). Conclusion: Gestational diabetes, preeclampsia due to diabetes, and history of macrosomic birth were the main predictors of macrosomia. Moreover, macrosomia increased some delivery complications for both mothers and newborns.

The American College of Obstetricians and Gynecologists (ACOG) defined macrosomia as birth-weight over 4,000 g irrespective of gestational age or greater than the 90th percentile for gestational age after correcting for neonatal sex and ethnicity.[1] These births affect 3-15% of all pregnancies.[2] Macrosomia as well as the presence of a large fetus, either defined by a weight cutoff or as large for the gestational age in the literature, are associated with numerous perinatal and maternal complications.[1,3,4]

Some studies have reported that excess weight gain during pregnancy is associated with macrosomia and other infant as well as maternal adverse outcomes.[2,7-9] Nevertheless, there is no agreement on the impact of gestational weight gain on short- and long-term outcomes for women and their offspring.[7] According to other studies, gestational diabetes and fasting blood glucose are considered as the risk factors for macrosomia.[4,10,11] In order to more efficiently deal with the confounders in the analyses, using precise statistical models and conducting studies with longer follow-up periods in future are also required.[4,7]

Since delivery of the macrosomia births is associated with serious problems, a great number of researchers are attracted to work on this problem.[12,13] Also, due to the fact that a large number of deliveries in Iran are by the cesarean section,[14] the significance of the macrosomic births has not been understood yet. Therefore, considering the mentioned controversies in both causes and complications of macrosomia in mothers and newborns, the present study aims to determine the effect of pregnancy weight gain and mother’s characteristics on the macrosomic births and, at the same time, compare macrosomic and normal newborns regarding the maternal and offspring complications of diabetes during pregnancy.

In the present study, the data related to 420 consecutive births occurring in public and private hospitals of Shiraz, Iran from October 2006 to March 2007 were analyzed. In these births, 32 newborns had over 4,000 g birth weight and, according to the ACOG,[1] were defined as macrosomic cases. To design a case control study, we sampled 128 out of 388 eligible non-macrosomic newborns as the control group using the systematic sampling method to ensure the representativeness of the controls. Besides, all the 32 macrosomic births were enrolled into the study as cases. The sample size was calculated according to the findings of another study [4] in which the percentage of diabetes was 24% and 4.3% in macrosomic and other births, respectively. By considering the power of 0.80% and type 1 error of 0.05%, we had to select 42 newborn for each groups. To prevent the decrease in power resulting from insufficient cases, we selected four controls per each case. Therefore, 128 normal newborns were selected as the control group. It should be noted that only the term births, which had the gestational age of 37-42 weeks and no abnormalities at birth, were included in the present study. Informed consent was obtained from the subjects.

To collect the data, a structured questionnaire, including information regarding both mothers and newborns, was used in the present study. The mother’s information included the demographic characteristics and the data of previous pregnancies, including the history of hypertension, stillbirth, macrosomic birth, and gestational diabetes. The questionnaire also included the data about the current pregnancy, which was recorded based on the medical documents of the mother in pregnancy, including preeclampsia, induction of labor, episiotomy, polyhydramnios, and neonatal distress. The data of the mothers’ medical history were recorded based on the self report. In addition, physical activity during pregnancy and weight prior to pregnancy were obtained through interviews. Some of the other variables, such as weight prior to delivery, height, and systolic as well as diastolic blood pressure, were directly measured by the research team and saved to the questionnaires. Moreover, the validity of the questionnaire was confirmed by an epidemiologist and a gynecologist. Also, to increase the reliability of the data, we used the trained nurses who had a high interclass correlation agreement from each hospital.

The data of the current study were analyzed through the Statistical Product and Service Solutions (SPSS) statistical software (v. 16.0) (Chicago IL, USA). Normal distribution of the data was checked using the histogram chart and the Kolmogrov Smirnov test. In the first stage, univariate associations of the quantitative and qualitative variables with macrosomia were assessed by independent t-test and Chi-square test, respectively. Then, two binary logistic regression models were fitted to the data by stepwise method in order to determine the main predictors and consequences of macrosomic births. In this way, two separate models were fitted; one model was fitted to the risk factors and the other to the consequences of macrosomia. For modeling the macrosomia risk factors, the following variables were included: Neonate sex, age of mother, preeclampsia, history of section and macrosomic delivery, body mass index (BMI) prior to pregnancy and prior to delivery, and fasting blood sugar as well as diabetes in the current pregnancy. Moreover, neonatal hypoglycemia, episiotomy, induction, and delivery type were included in the other model as the consequences of the macrosomia birth. Hosmer and Lemeshow test was used for testing the goodness of fit. Besides, 0.05 was considered as the significance level. The protocol of the research was approved by Ethics Committee of Shiraz University of Medical Sciences, Shiraz, Iran.

The results of the t-test showed a significant difference between macrosomic and normal newborns regarding weight, height, and head size. Also, the mothers of both groups were significantly different regarding age, fasting blood sugar, BMI prior to pregnancy and prior to delivery as well as weight gain in pregnancy. However, no significant difference was observed between the two groups regarding blood pressure, gestational age, physical activity of the mothers, and Apgar score of the newborns [Table 1]. 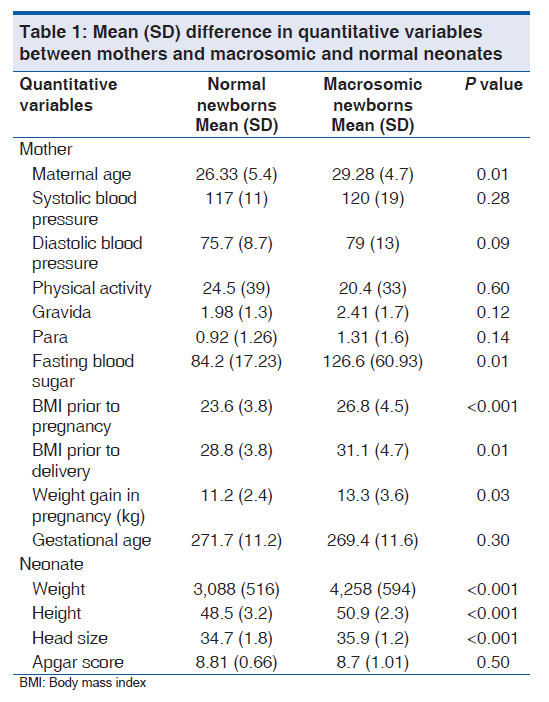 Mothers of macrosomic newborns experienced more cesarean section and macrosomic delivery in their last pregnancies. Also, the percentage of diabetes in pregnancy, section delivery, episiotomy, and preeclampsia was significantly higher in the current pregnancy of the macrosomic newborns’ mothers. Moreover, in comparison to the normal newborns, the macrosomic ones were more affected by hypoglycemia [Table 2].

Table 2: N (%) difference in qualitative variables between mothers and macrosomic and normal neonates

The results of regression analysis showed gestational diabetes, macrosomic birth history, and preeclampsia could be an associated finding in diabetes with macrosomic babies. Based on our results, gestational diabetes, macrosomic birth history, and preeclampsia could increase the likelihood of macrosomic newborns to 11.9, 3.8, and 3.3 folds, respectively [Table 3]. Table 4 shows the complications of macrosomia births. Neonate hypoglycemia and section deliveries may increase in the newborns more than 4,000 g to 4.7 and 4.1 folds, respectively. Hosmer and Lemeshow test value was reported as 0.43 and 0.539 for the first and the second model, respectively.

Table 3: The result of regression model for the risk factors of macrosomic births

Table 4: The result of regression model for the consequences of macrosomic births

Our results showed gestational diabetes as the most important predictor of macrosomia births. The history of macrosomic births and preeclampsia in the pregnancy period were also other predictors of such births. In the same line, gestational diabetes was determined as the main predictor in another study.[13] Of course, maternal obesity, increasing age, and parity were also considered as the main risk factors for fetal macrosomia in that study. The findings of the present study did not show the effect of age and parity on macrosomia. These differences are due to unadjusted analysis since the univariate analysis in the current study also showed mother’s age and BMI as the related factors. In addition, the results of our two recent studies revealed a significant relationship between diabetes (overt diabetes in pregnancy and gestational diabetes) and macrosomic birth.[4,11]

Regression analyses also showed that macrosomic births increased the section deliveries and neonate hypoglycemia morbidity. In a three-year study, which was conducted on 7,367 deliveries, the cesarean section rate in the macrosomic group was 25.8% compared to the general incidence (13.1%) during the study period. Moreover, the researchers reported that macrosomia could increase the neonatal morbidity.[13]

In the present study, multivariate analysis was performed to adjust the effect of some confounding variables related to diabetes. Other studies showed that the women with gestational diabetes or overt diabetes are more obese and also gain more weight in pregnancy. BMI is one of the predictors of diabetes.[4,14] Moreover, BMI is considered as a risk factor for macrosomia[7,13,15,16] and the rate of cesarean section, induction of labor, and other adverse maternal and neonatal outcomes is higher in obese women compared to the other.[15] Therefore, there is a complex causal network among the factors related to diabetes and macrosomia, which has caused large controversies among the studies regarding the factors related to macrosomia. However, the best strategy to adjust the confounding factors is using the multiple logistic regression models to eliminate the effect of the confounding variables. The results of bivariate analysis showed that many of the probable factors which had been significantly related to macrosomia in other studies were related to the macrosomic births in our study, as well; however, after the modeling, only a few factors remained as predictors. One of these factors was BMI prior to pregnancy and the prenatal period. The complications of macrosomic births, including shoulder dystocia, episiotomy, induction of labor, and metabolic health problems in adulthood, have also been reported in other studies.[9,17] Of course, these finding are confounded by obesity-prone genotypes, obesity-linked lifestyles, and maternal comorbidity,[6] which can be removed by multiple regression models.

Unfortunately, the ultrasound techniques do not have a high reliability in detection and prediction of macrosomia and the probability of correct diagnosis of macrosomia by ultrasound tests is only 37-22%.[18] Therefore, gynecologist and newborns specialist are recommended to care more for the mothers with gestational diabetes and a history of macrosomic births.

Following this recommendation is helpful for preventing other complications which may occur in macrosomic newborns as well as mothers.

Gestational diabetes and having a history of macrosomic birth in the reproductive period as well as preeclampsia in the pregnancy period are the main predictors of macrosomia in this study. Moreover, macrosomic births increase some delivery complications for both mothers and newborns.

The authors would like to thank all the mothers who participated in the present study. They are also very grateful for all the midwives and nurses who cooperated in the process of data collection.