Adenomatoid odontogenic tumor (AOT) is a relatively rare, benign, hamartomatous, and cystic odontogenic neoplasm that was first described more than a century ago. The lesion still continues to intrigue experts with its varied histomorphology and controversies regarding its development. The present article describes a case of cystic AOT with an unusual histomorphology associated with an impacted 44 in a 21âÂÂyearâÂÂold male.

The adenomatoid odontogenic tumor (AOT) accounts for 2–7% of all odontogenic tumors.[1] The tumor that meets today’s diagnostic criteria for AOT has been known for more than a century. Steensland’s report of 1905 of an “epithelioma adamantinum” represents the earliest publication of an AOT.[2] variety of terms has been used to describe this lesion; for many years, adenoameloblastoma was more commonly use because the tumor was considered a histologic variant of the solid/ multicystic ameloblastoma.[2]

WHO in 1971 adopted the term “adenomatoid odontogenic tumor” proposed by Philipsen and Birn [3,4] and defined the lesion as, “a tumor of odontogenic epithelium with duct-like structures and with varying degrees of inductive changes in the connective tissue. The tumor may be partly cystic, and in some cases the solid lesion may be present only as masses in the wall of a large cyst. It is generally believed that the lesion is not a neoplasm.[4,5] The latest WHO definition, states that an “AOT is composed of odontogenic epithelium in a variety of histoarchitectural patterns, embedded in a mature connective tissue stroma and characterized by slow but progressive growth.”[1]

The confusion that surrounds the nature of this lesion became evident in the 1971 definition. The divergent views on the origin, hamartomatous versus neoplastic nature and cystic versus solid presentation have generated many debates and discussions among many authorities. The present case describes a mandibular, follicular type of AOT in a male patient at a rare location. The case is unusual due to its rare clinical presentation and important due to its cystic nature and varied histomorphology. The article also discusses briefly the controversies surrounding its cystic histomorphology.

A 21-year-old male reported with a painless, gradually increasing swelling in the right mandibular premolar region of 2 months duration. A detailed history revealed no other significant local or systemic findings. Intraoral examination revealed a nontender swelling extending from right mandibular canine to second premolar region. The swelling was firm with egg-shell crackling in the center of the lesion. Right mandibular first premolar was clinically absent and the adjacent canine, and second premolar was vital and did not exhibit mobility. Was any other tooth absent? Radiographic evaluation revealed a well-circumscribed radiolucency involving impacted right mandibular first premolar, pushing the root of the canine toward the lateral incisor, and pushing the root of the second premolar toward the first molar. The impacted first premolar was pushed toward the lower border of the mandible [Figure 1]. A differential diagnosis of the dentigerous cyst, unicystic ameloblastoma, and AOT were considered. After obtaining consent, the patient was prepared for surgery under general anesthesia. 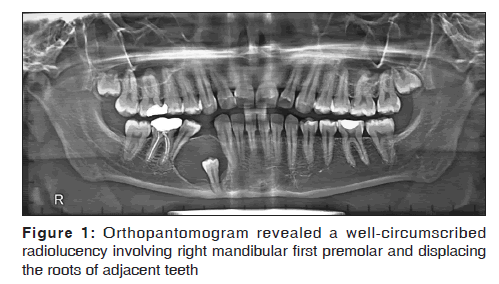 A two-sided mucoperiosteal flap was raised from right mandibular lateral incisor to right second molar. The lesion was found attached to the periosteum in the region of the mental foramen; hence, it was meticulously dissected, and completely excised. The bony cavity was thoroughly curetted. After debridement and achieving hemostasis, the wound was closed by primary intention using 3–0 coated vicryl.

On microscopic examination, a large cystic space lined by 2–4 cell thickness, nonkeratinized stratified squamous epithelium resembling a dentigerous cyst with abrupt intramural proliferation of odontogenic epithelial cells forming whorls, nodules, and sheets was found [Figure 2]. The nodules and sheets of intramural proliferation were chiefly composed of spindle-shaped and polygonal cells with areas of rosettes and duct-like structures lined by single layer of tall columnar cells, with the nuclei polarized away from the luminal surface and containing tumor droplets [Figure 3]. Areas of basophilic calcification and eosinophilic amorphous material similar to tumor amyloid were evident. Few, small, isolated odontogenic islands were also noted within the connective tissue capsule. The cystic epithelial lining at places revealed tall columnar basal cells and loosely arranged superficial cells; however, the Vickor and Gorlin criteria were not evident. Therefore, AOT arising from unicystic ameloblastoma was not considered. The juxta-epithelial connective tissue showed hyaline material. The connective tissue capsule was thick exhibiting bundles of loosely arranged collagen bundles, numerous engorged blood vessels, and areas of hemorrhage. Histopathological diagnosis of AOT was given based on the above features. 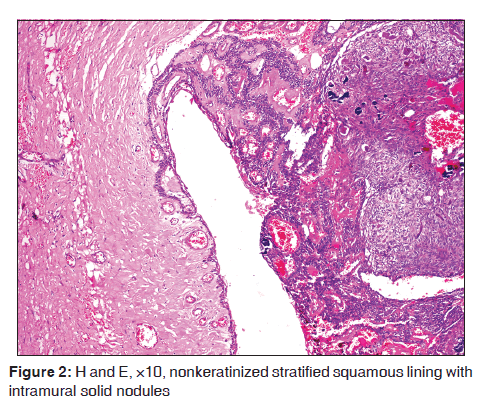 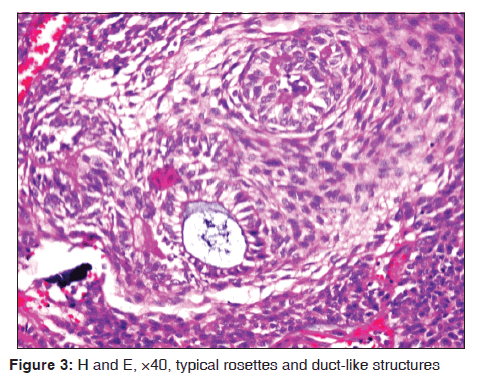 The postoperative recovery was uneventful except for paresthesia in the area of distribution of the right mental nerve which lasted for a period of 4 weeks. Postoperative neuro-sensory evaluation for pain and tactile sensation after 1-year did not reveal any deficit in the area of distribution of the mental nerve. There was auto-reversal of the canine and second premolar deviation after surgical removal of the lesion within a period of 1-year [Figure 4]. 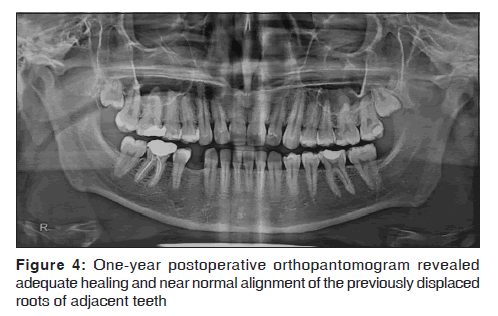 The AOT is considered a benign, nonneoplastic (hamartomatous) lesion with a slow but progressive growth. It occurs in intraosseous as well as in peripheral forms.[5]

WHO, since 1971 adopted the term proposed by Philipsen and Birn as “adenomatoid odontogenic tumor.”[3] The cystic nature of the lesion has been emphasized in many of the terminologies since its earliest description in 1905, which include “epithelioma adamantinum,” “cystic adamantoma,” “adenoameloblastoma,” “cystic complex composite odontoma,” “ameloblastic odontogenic tumor,” “odontogenic adenomatoid tumor.”[2,4,7,8] In 2003, Marx and Stern, have suggested that adenomatoid odontogenic cyst is a more appropriate terminology since it usually presents as a cystic lesion with intraluminal proliferation.[8]

The follicular type of AOT, shows a well-defined unilocular radiolucency associated with the crown and often part of the root of an unerupted tooth thus mimicking a dentigerous or follicular cyst. In fact, 77% of follicular type AOT are initially diagnosed as dentigerous cysts.[11] Many present as cystic lesions with only mural nodules of AOT lesional tissue and in some instances origin of the lesional tissue from the reduced enamel epithelium can be demonstrated histologically.[12] Whether the origin of the follicular variant occurs before or after the cystic expansion has taken place is open to conjecture. If it occurs after cystic expansion, then this effectively means origin from a dentigerous cyst and several such case reports have been published.[13]

The extrafollicular type commonly presents as a well-defined, unilocular radiolucency found between, above or superimposed upon the roots of erupted, permanent teeth, which often leads to the preoperative, tentative diagnosis of a residual, radicular, globulo-maxillary or lateral periodontal cyst depending on the actual intraosseous site of the lesion.[4,5] The cut surface may reveal a solid tumor mass or show one large or several small cystic spaces containing a yellowish, semi-solid material with an unerupted tooth found embedded in the tumor mass or projecting into a cystic cavity.[14] From the foregoing, it is evident that most AOTs do present as cystic lesions clinically and pathologically whether follicular or extrafollicular. In addition to their presentation, there are various reports which claim the origin or association of an AOT with a cyst or cystic neoplasm which is discussed in the following section.

A report of an AOT originating in the wall of a calcifying odontogenic cyst has been published by Zeitoun et al.[15] Two cases of unicystic ameloblastoma associated with AOTs occurring in the anterior mandible have been published.[16,17] The present case occurred in association with an impacted mandibular premolar and revealed a cystic lesion with mural proliferation. The cystic lining appeared nonkeratinized stratified squamous, resembling that of a dentigerous cyst. The lining abruptly transformed into intramural solid nodules, with a classic adenomatoid histomorphology.

If the developmental theory that states secondary entrapment of a cyst/follicle into the developing tumor is the explanation, then the question arises: Why does the cystic lining show a sudden transformation into a solid lesion? The reason why most AOTs are follicular and why are they associated with cysts or whether they arise from preexisting cysts needs to be explored. The answers may probably be found when the origin and molecular biology of AOT is studied in more detail.

The origin of AOT is controversial. Different hypotheses for the pathogenesis of AOT have been proposed. It could theoretically arise from the enamel organ, the epithelial lining of the dentigerous cyst, epithelial rests of Malassez of the deciduous or permanent tooth, or remnants of the dental lamina and may show an ameloblastic phenotype.[18-27] Some believe they originate from the odontogenic epithelium of a dentigerous cyst.[11] Although there are arguments both in favor and against the origin from a preexisting dentigerous cyst, but no particular conclusion has been deduced.[3,18,21,25,26] Philipsen et al. have strongly argued in favor of AOT being derived from the dental lamina or its remnants. According to this hypothesis, the lesion grows (sometimes while forming a cystic space) next to or into a nearby dental follicle, leading to the “developmental theory.”[14] Cases like ours may shed more light into the pathogenesis of AOT from a dentigerous cyst or their association with it.

Ide et al. stated that, 20 years after Philipsen et al., they have just begun to understand the histogenetic relationship between AOT and gubernaculum cord.[2] The authors, stated that it is reasonable to conclude that dental lamina in the gubernacular cord of a developing permanent incisor, canine or premolar seems to be an embryonic source of more than 96% of AOT.[28] With all the possible explanations regarding the development of AOT, more research is required to come to any conclusion regarding their cystic association.

The article presents a rare case of AOT arising from a dentigerous cyst. The case is unusual due to its clinical presentation and important due to its cystic nature and varied histomorphology. On account of the controversies surrounding the lesion, a detailed study of its molecular origin and behavior is suggested. 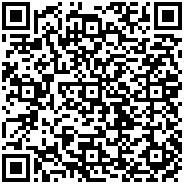