Background: Monosodium glutamate (MSG) is a commonly used food additive and there is growing concern that excitotoxins such as MSG play a critical role in the development of several hepatic disorders.

Objectives: The histochemical effect of monosodium glutamate was investigated on the liver of adult Wistar rats.

Methods: Adult male Wistar rats (n = 24), with an average weight of 230 g were randomly assigned into two treatment groups, (A & B) (n=16) and Control (C) (n=8). The rats in the treatment groups (A & B) received 0.04mg/kg and 0.08mg/kg of monosodium glutamate thoroughly mixed with the grower’s mash, respectively on a daily basis for forty-two days. The 0.04mg/kg and 0.08mg/kg monosodium glutamate doses were chosen and extrapolated in this experiment based on the previous work done with the additive. The control group (C) received equal amount of feed (Growers’ mash) without monosodium glutamate added for the same period. The rats were given water ad libitum. Both the treatment and control rats were sacrificed by cervical dislocation on day forty-three of the experiment. The Liver was carefully dissected out and quickly fixed in Bouin’s fluid for histochemical studies, while blood was collected for estimation of total protein, albumin, transaminasese (aspartate aminotransferase (AST) and alanine aminotransferase (ALT) .

Results: The histological findings showed changes like dilatation of the central vein, which contained lysed red blood cells, cyto-architectural distortions of the hepatocytes, atrophic and degenerative changes on the liver of the animals that received feed incoporated with monosodium glutamate. Furthermore, the biochemical parameters were significantly higher in the test than control groups (P < 0.0001). These changes were more severe in the group that had 0.08 mg/kg of monosodium glutamate mixed in their feed.

Conclusion: These findings showed that monosodium glutamate consumption may have some deleterious effects on the liver of adult Wistar rats at higher doses and by extension may affect the functions of the liver.

Some environmental chemicals such as , industrial pollutants and food additives have been implicated as causing harmful effects.[1] Most food additives act either as preservatives, or enhancer of palatability. One such food additive is Monosodium Glutamate (MSG) and it is sold in most open market stalls and stores in Nigeria as “Ajinomoto” marketed by West African Seasoning Company Limited.

Some pathological conditions like cancers result from the body"s normal responses to abnormal environmental influences. Such noxious external influences as pathogenic microorganisms, trauma, dietary deficiencies and hereditary factors acting alone or in a complex interaction with environmental factors, cause diseases.2

The safety of MSG"s usage has generated much controversy locally and globally.[3] In Nigeria, most communities and individuals often use MSG as a bleaching agent for the removal of stains from cloths (personal communication). There is growing apprehension that its bleaching properties could be harmful or injurious to the body, or worse still inducing terminal diseases in consumers when ingested as a flavour enhancer in food. Despite the health problems seemingly associated with the use of MSG, reputable international organisations and nutritionists have continued to endorse MSG, reiterating that it has no adverse reactions in humans. Notably of such is the Directorate and Regulatory Affairs of Food and Drug Administration and Control (FDA&C) in Nigeria, now NAFDAC. NAFDAC has certified MSG as a safe and wholsome product that is not injurious to health.[4]

MSG improves the palatability of meals and thus influences the appetite centre positively with its resultant increase in body weight.[5, 6, 7] Though MSG improves taste stimulation and enhances appetite, reports indicate that it is toxic to human and experimental animals.[8] MSG has been reported to have toxic effects on the testis by causing significant oligozoospermia and increase in abnormal sperm morphology in a dose-dependent fashion in male Wistar rats.[9] It has also been implicated in male infertility by causing testicular haemorrhage, degeneration and alteration of sperm cell population and morphology.[10] It has been reported that MSG has neurotoxic effects resulting in brain cell damage,[11] retinal degeneration, endocrine disorders and some pathological conditions such as addiction, stroke, epilepsy, brain trauma, neuropathic pain, schizophrenia, anxiety, depression, Parkinson"s disease, Alzheimer"s disease, Huntington"s disease, and amyotrophic lateral sclerosis.[12]

The liver is the largest glandular organ of the body, weighing between 1.4-1.6kg. It lies below the diaphragm in the thoracic region of the abdomen. It plays a major role in metabolism and has a number of functions in the body, including glycogen storage, plasma protein synthesis, production of bile; an alkaline compound which aids in digestion, and detoxification of most substances.[13] Since the liver is involved in the performance of these varied functions, it may be susceptible to injury resulting from toxic substances. This work was carried out to investigate the histochemical effects of MSG on the liver of adult Wistar rats and also to corroborate the result of previous researchers.

Twenty four, (24) adult male Wistar rats with an average weight of 230g were randomly assigned into three groups A, B and C of (n=8) in each group. Groups A and B of (n=16) served as treatments groups while Group C (n=8) was the control. The rats were obtained and maintained in the Animal Holdings of the Department of Anatomy, School of Basic Medical Sciences, University of Benin, Benin city, Nigeria. They were fed with growers" mash obtained from Edo feed and flour mill limited, Ewu, Edo state and given water and feed ad libitum. The rats were acclimatised for 4 weeks before the experiment started.

The Monosodium glutamate (3g/sachet containing 99+% of MSG-Ajinomoto) was obtained from Kersmond Grocery stores, Uselu, Benin City. The rats in the treatment groups (A and B) were given 0.04mg/kg and 0.08mg/kg of MSG ground and thoroughly mixed with the growers" mash respectively on a daily basis. The control group (C) received equal amount of feed (growers" mash) without MSG added for forty-two days. The 0.04mg/kg and 0.08mg/kg MSG doses were chosen and extrapolated in this experiment based on the previous work done with the additive.[14, 15, 16] The two doses were thoroughly mixed with fixed amount of feeds (550g-arrived at during the pilot study) in each group, daily.

The liver tissues were dehydrated in an ascending grade of alcohol (ethanol), cleared in xylene and embedded in paraffin wax. Serial sections of 7 microns thick were obtained using a rotatory microtome. The deparaffinised sections were stained with PAS reagent. Photomicrographs of the specimens were obtained using digital research photographic microscope in the University of Benin research laboratory.

Blood samples were collected from all the rats within different treatment groups through the orbital venous plexuses on the last day of the experiment under chloroform anaesthesia. Blood serum was separated by centrifugation at 3000 rpm for 15 min. Serum was analysed colorimetrically for total protein, albumin, transaminases (aspartate aminotransferase (AST) and alanine aminotransferase (ALT).

This study was given consent and approval for the methodology and other ethical issues concerning the work by the University of Benin Research Ethics Ccommittee.

The control sections of the liver showed normal histochemical features with the hepatic lobules showing irregular hexagonal boundary defined by portal tract and sparse collagenous tissues. The hepatic portal veins, bile ductules and hepatic artery within the portal tract were all visible. PAS positive substances were not observed in the sections of the liver tissue treated with diastase; this suggests the absence of carbohydrate in the tissue after treating with the digestive enzyme, diastase (Figure 1), whereas PAS positive substances were observed in control session of the liver that was not treated with diastase (Figure 2). 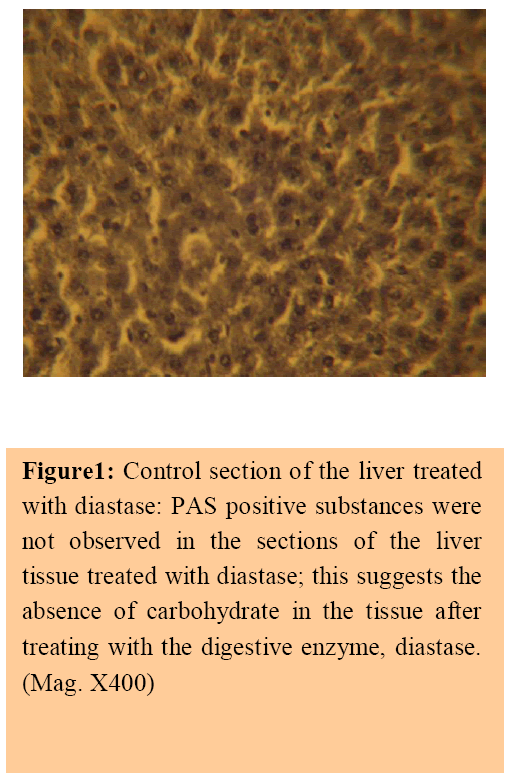 Figure 2: PAS positive substances (PPS) observed in control session of the liver that was not treated with diastase. (Mag. X400) 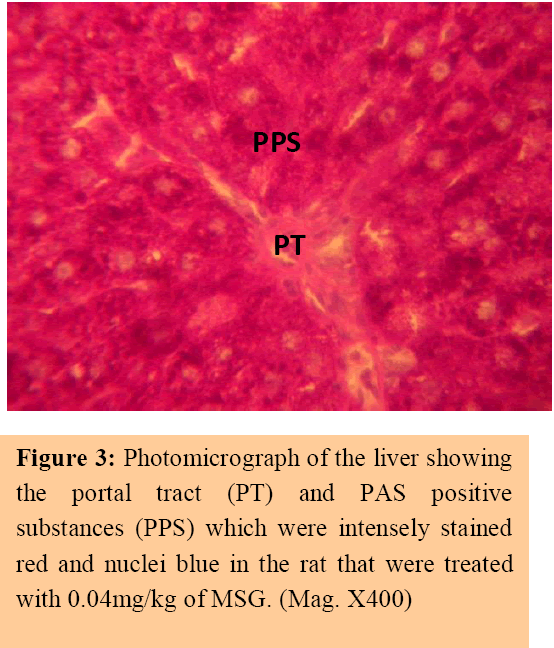 Figure 3: Photomicrograph of the liver showing the portal tract (PT) and PAS positive substances (PPS) which were intensely stained red and nuclei blue in the rat that were treated with 0.04mg/kg of MSG. (Mag. X400) 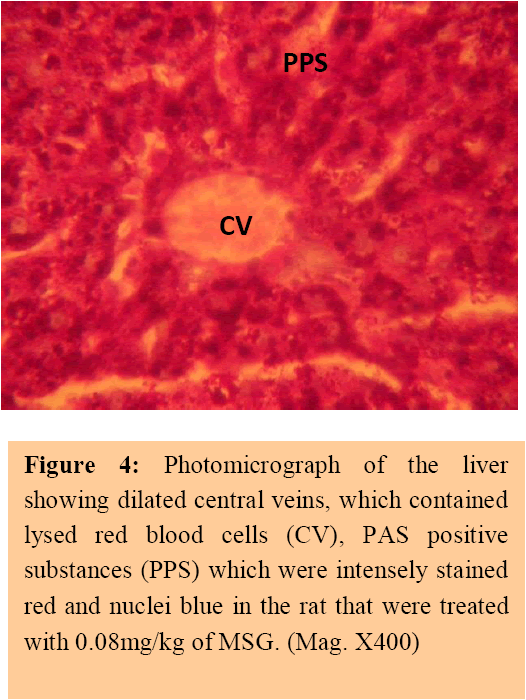 The treatment sections of the liver showed some histological changes that were at variance with those obtained in the control. There were evidence of dilatations of the central veins, which contained lysed red blood cells and cyto-architectural distortions of the hepatocytes and centrilobular haemorrhagic necrosis. There were atrophic and degenerative changes with the group that received 0.08mg/kg of MSG more.

Table 1 above shows the mean and standard deviation of each group for the different components. The table revealed that experimental group B (ExpB) has the highest mean for components. Total Protein, Albumin, ALT and AST. The Control group had the least mean for all the components. 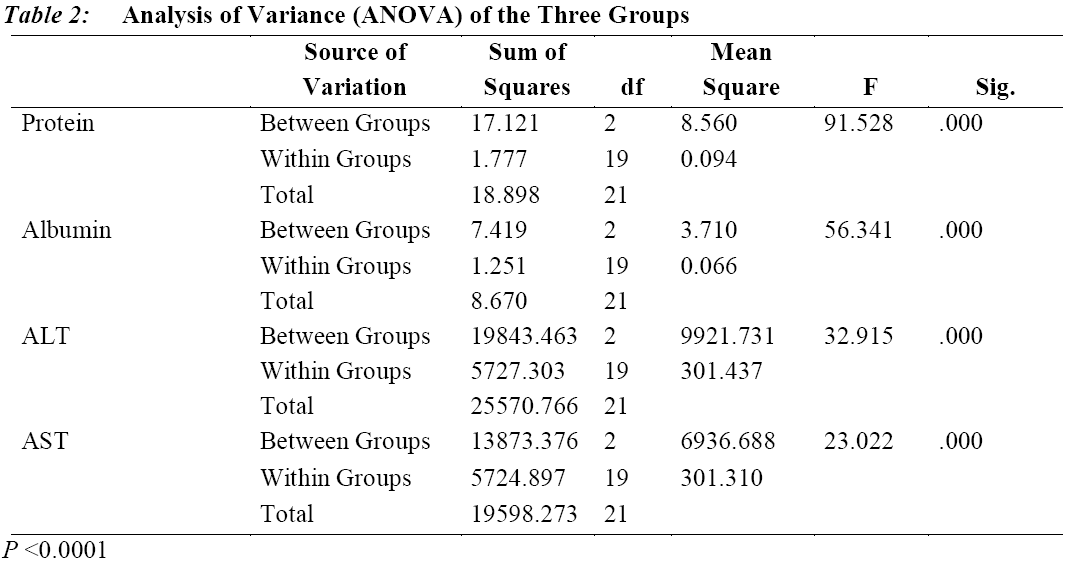 Table 3 shows the t-test of the difference between the means of the high and low dose of each component. The result revealed that there is a significant difference in the means of high dose and that of low dose for components protein and albumin (P < 0.0001), ALT (P = 0.003) and AST (P = 0.043).

The results of the histochemical studies revealed that with increasing dose of monosodium glutamate consumption, there were varying degrees of dilatations of the central vein of the liver which contained lysed red blood cells in the treatment group compared to the control sections of the liver. The necrosis observed is in consonance with the findings recorded in previous work on MSG. [14, 15, 16] This suggests that the distortion of the cyto-architecture of the liver could be associated with functional changes that may be detrimental to the health of the rats. The proliferating cells of the liver, which produce red and white blood cells, are normally found between the hepatic cells and the walls of the vessels.[17] As a result of the distortion and dilatation of the hepatocytes and their central vein, the haematopoietic function of the liver may have been highly affected as a result of probable toxic effect of MSG. This was further buttressed by the increase in the liver enzymes obtained in the test group. In addition, total protein and albumin increased in this study The increase in total protein may be due to the fact that MSG was given for a short period of time. The resultant effect is acute toxicity leading to enhanced hepato-cellullar activity and increase in globulin and albumin components of the protein .However, with prolonged usage, hepatic necrosis is likely to occur with a resultant low albumin levels.

Cellular degeneration has been reported to result in cell death, which is of two types, namely apoptotic and necrotic cell death. These two types differ morphologically and biochemically.[18] Pathological or accidental cell death is regarded as necrotic and could result from extrinsic insults to the cell such as osmotic, thermal, toxic and traumatic effects.[19] Cell death in response to toxins occurs as a controlled event involving a genetic programme in which caspase enzymes are activated.[20]

MSG may have acted as toxins to the hepatocytes, thereby affecting their cellular integrity and causing defect in membrane permeability and cell volume homeostasis.

The atrophic and degenerative changes observed in this experiment may have been caused by the cytotoxic effect of MSG on the liver. This obviously will affect the normal detoxification processes and other functions of the liver.

This study had some limitations. The actual quantity of MSG consumed per day by each rat in the various group could not be actually ascertained since the substance was mixed with their feeds. Some rats could have consumed more of the MSG than others and this could vary the pathology seen. Another factor was the duration of study (acute) as opposed to chronic which could have yielded more light on the pathology.

The results obtained in this study following the administration of 0.04g/kg and 0.08g/kg per day of MSG to adult Wistar rats affected the histology of the liver and affected liver function. Thus the ingestion of this substance by humans should be reviewed. It is recommended that further studies be carried out to corroborate these findings.