Infant and Young Child Feeding Perceptions and Practices among Mothers in a Rural Area of West Bengal, India

Background: There are many wrong practices and perceptions of Infant and Young Child Feeding (IYCF) prevalent among different socioâÂÂÂÂdemographic groups. Aim: To observe IYCF perceptions and practices among mothers in a rural area of West Bengal. Subjects and Methods: ClinicâÂÂÂÂbased crossâÂÂÂÂsectional descriptive study by interviewing mothers of 0âÂÂÂÂ23 month old children. Appropriate response to each selected key question was assigned a score of + 1 for objective assessment. Data analysis was done by standard statistical methods using the statistical software SPSS 13.0 (Kolkata, India) for windows version. Percentages were calculated for descriptive statistics. ChiâÂÂÂÂsquare test of significance was employed whenever required. Results: 65.8% (225/342) mothers did not initiate breast feeding within 1 h of birth, 41.7% (90/216) mothers of children aged 6 months or more did not exclusively breastfeed their babies up to 6 months and 28.1% (96/342) used bottles for babyâÂÂÂÂfeeding. Perception scores among younger than 20âÂÂÂÂyearâÂÂÂÂold mothers were found to be highest; however, practice score increased significantly with age. Though perception and practice of mothers with some education were significantly better they wane with higher education. Lowest practice score was found in the richest per capita income group. Conclusion: Emphasis should be given to IYCF education sessions.

Infant and young child nutrition need utmost attention of scientists and planners for the very simple reason that growth rate in the early years of life is maximum and infant and young child feeding (IYCF) practices comprising breastfeeding as well as complementary feeding have major role in determining the nutritional status of children.

Malnutrition has been responsible, directly or indirectly, for 60% of all deaths among children less than 5 years of age in India annually.[1] Many of these deaths are possibly associated with inappropriate feeding practices during early years of life. Only 35% of infants world-wide are exclusively breastfed during the 1st 4 months of life and complementary feeding begins either too early or too late with foods, which are often nutritionally inadequate and unsafe. Poor feeding practices in infancy and early childhood, resulting in malnutrition, contribute to impaired cognitive and social development, poor school performance and reduced productivity in later life.

A set of indicators to assess infant feeding and evaluate the progress of breastfeeding promotion efforts was recommended by world health organization (WHO) in 1991.[2] In 2001 WHO recommended exclusive breastfeeding for 1st 6 months of life.[3,4] Based on an in-depth research work started at 2002 by members of WHO working group to review and develop potential indicators of complementary feeding practices that address the multidimensionality of complementary feeding,[5] a revised set of population-based Indicators of IYCF was developed in 2007.[6]

This clinic-based cross-sectional observational descriptive study through interview of the mothers of children in a rural area (Singur, Hooghly) of West Bengal was undertaken during June-August 2009.

Among the four sub-centers under the service area covered by rural health unit and training center, Singur, two sub-centers, namely, Paltagarh and Diara were randomly selected for the study.

During the 3 months study period the mothers of children aged 0-23 months attending the clinics for immunization or treatment of minor illnesses were included in the study. After taking informed consent, data were collected regarding IYCF perceptions and practices by interviewing the mothers using pre-designed, pre-tested, semi-structured questionnaire in Bengali, the local language.

The different variables considered were socio-demographic characteristics like age of the children; age, literacy status, occupation, and parity of the mothers; family type, per capita income (PCI) and different aspects of infant and IYCF perception and practice like timing of breastfeeding initiation, colostrum feeding, pre-lacteal feeds, duration of exclusive breastfeeding, bottle feeding and introduction of complementary feeding. For determining the status of IYCF practices six core indicators and three optional indicators were selected (out of the 8 core indicators and 7 optional indicators as suggested by WHO) based on of local culture and customs. This is a set of simple, valid and reliable indicators to assess IYCF practices, amenable to population-level measurement.[6] In order to have objective assessment a short-list of five selected key questions each on IYCF perception and practices of mothers was incorporated in the schedule. Appropriate responses as per recommended WHO guidelines were assigned a score of + 1. Hence, maximum possible score for each individual were five in each of perception and practice.

Age groups of the children are described in intervals of months completed. Most indicators are based on current status data, i.e., feeding practice for the day preceding the survey, as the study was conducted in a rural area, mostly inhabited by people of poor socioeconomic status. Moreover, previous-day recall method is widely used and found appropriate to describe infant feeding practices in populations.[6] Standard criteria that define selected infant feeding practices were followed.[6]

Data analysis was done by standard statistical methods. Percentages were calculated for descriptive statistics. Chi-square test of significance was employed whenever required. 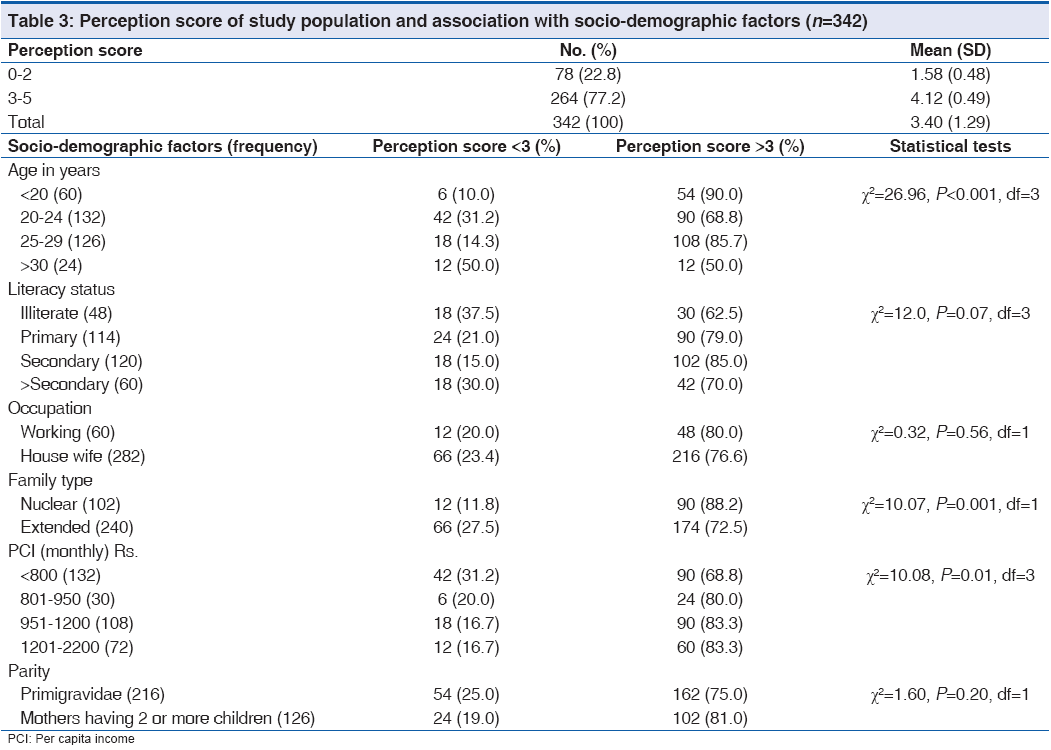 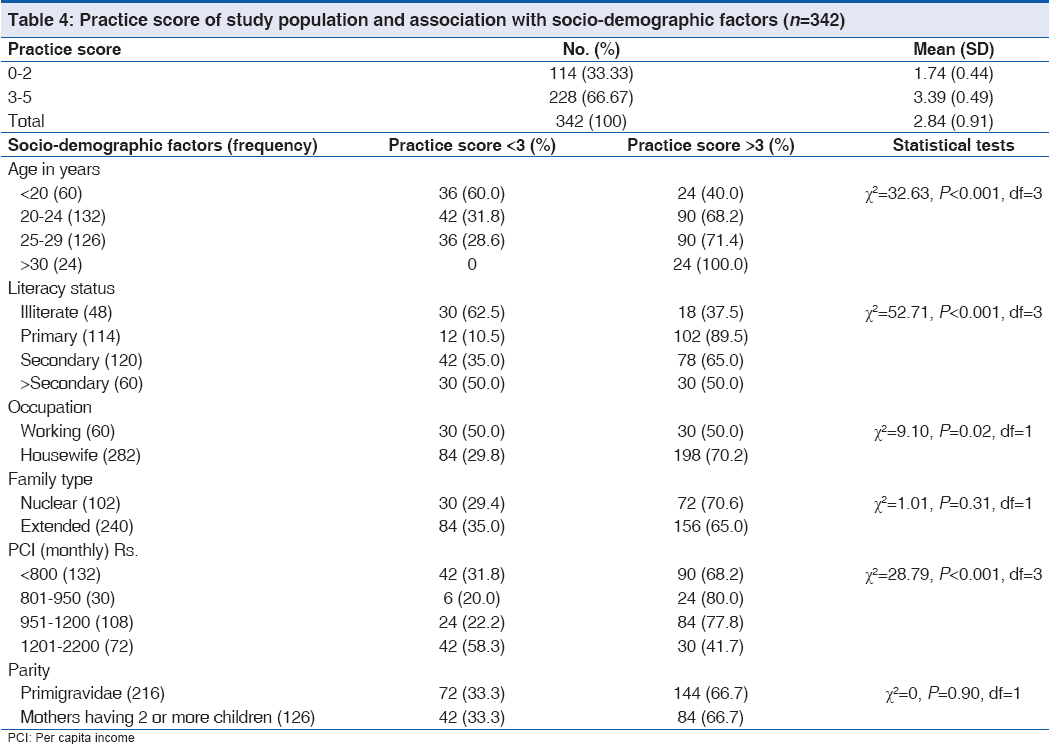 According to the national family health survey-3 data[7] the percentage of children who are breast fed within 1 h of birth in rural India and in rural West Bengal are 21.5% and 24.5% respectively; whereas in this study this was better at 34.2%. Similarly, a proportion of children aged 0-5 months who were exclusively breastfed was more at 58.7% in this study than rural India (48.3%) or rural West Bengal (57.1%). The value of another indicator, i.e., children aged 6-8 months receiving solid or semi-solid food and breast milk was again a little better at 66.6% than rural India (53.8%) and rural West Bengal (55.3%). The possible reasons for the differences noted are that the national survey had been conducted about 4 years earlier and that this study had the limitation that it was not conducted on a probability sample but on mothers coming for vaccination or for treatment for mild sickness of the children (hence the larger number of younger children in the sample).

WHO recommends that breastfeeding should be initiated immediately after birth, preferably within 30 min of delivery.[8] The delay in initiation will lead to a delay in the development of Oxytocin reflexes, which are very important for the contraction of the uterus and breast milk reflex.[9] Though 23.7% mothers perceived that breastfeeding should be initiated within 1st h of birth in this study, actually a higher 34.2% initiated breastfeeding within 1st h of birth of the baby, which is still lower than what are found in another study.[10] In this case, even 76.3% delivery at Government hospital could not achieve a figure higher than 34.2%.

A total of 89.5% mothers agreed that colostrum should be offered to the newborn; but in practice 23.7% discarded it possibly due to decisions taken by other members of the family. A large proportion of mothers at 42.1% had given pre-lacteal feeds to the baby, mainly in the form of plain water, honey, jaggery water and sugar water. These practices were more common in illiterate mothers which are similar to the findings in other studies.[11-13] Thus literacy plays a very vital role in understanding the protective value of colostrum and the danger of pre-lacteal feeding. Parmar et al.[13] reported that 51.8% of home-delivered and 37.2% of institutionally delivered mothers gave pre-lacteal feeds to their children. The lower percentage of pre-lacteals in institutional deliveries also in our study highlights the importance of appropriate health education during perinatal period.

Of 216, children aged 6 months or more, 126 (58.3%) were exclusively breast fed until 6 months. This was almost same as 58.7% mothers of infants aged 0-5 months stated that their babies were exclusively breast fed in the 24 h recall period. The limitation of this study was the possible recall bias of the mothers of older children. However, the observation of this study was lower than that observed by Kulkarni et al.[12] (70.2%) and Banapurmath et al.[14] (60%).

A total of 28.1% babies were bottle fed in this study. When the standard of environmental sanitation is poor and education is low, bottle feeding is likely to be as nutritionally poor and bacteriologically dangerous. The feeding bottle is a vital factor in the infamous malnutrition-infection cycle, often reported to be a major cause of infant and child mortality.[15,16]

A total of 28% mothers knew that semi-solid food (complementary feeding) is to be started along with breastfeeding from 6 months of age. This is even lower than what reported by others.[12,17,18] 44.8% mothers believed that complementary feeding should be started at an older age (8-12 months). The commonest reason for delayed complementary feeding was the notion “the child will vomit everything.” Another important reason was ignorance. A study[19] had shown that improvement of feeding practices was possible through proper utilization of existing health services helping the mothers understand the rationale of the practices so that good feeding practices can be sustained.

There are some controversies raised by this study. All mothers over 30 have had a high practice scores, even though half of them had a low score for perception. Contrary to popular belief the perception and practice of mothers wane with high education. These may be due to the effect of co-variables, which need further research. Lowest practice score was found in richest PCI group at 41.7%. The poor practice of mothers with high educational and economic status may be explained by the fact that they represent most of the working mothers who have a significantly low IYCF practice score. Better perception score in mothers of nuclear family because these mothers are more socially and economically empowered. It may also be hypothesized that with increase of mother’s age she becomes more matured; but she does not necessarily become more responsible with better socio-economic status.

Summary of key findings is that 65.8% mothers did not initiate breast feeding within 1 h of birth, 41.7% mothers of children aged 6 months or more did not exclusively breastfeed their babies up to 6 months and 28.1% used bottles for baby-feeding in this study. Thus, the study highlights that inappropriate IYCF practices are still very much prevalent in the rural community. Lack of adequate knowledge of the mothers, culturally prevailing misconceptions and lack of sustained support and motivation of mothers, particularly working mothers are major contributors to the prevailing situation. Thus, emphasis should be given to IYCF education program during all contacts with eligible mothers. The interactions between health-care providers and the nursing mothers should be more frequent to ensure sustained correct infant and child care practices.

The authors sincerely acknowledge the support of Prof. Ranadeb Biswas Head, Department of PSM, All India Institute of Hygiene and Public Health, Kolkata at every stage of the study. 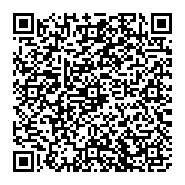