Talon cusp (TC) is a relatively uncommon developmental anomaly characterized by cuspâÂÂlike projections from the cementoâÂÂenamel junction to a variable distance toward the incisal edge of an anterior tooth. It usually presents on palatal/lingual surface of the anterior teeth. Studies have revealed that it consists of enamel, dentine and a variable amount of pulp tissue. Presence of this cusp on the facial surface of an anterior tooth is a rare finding with very few cases being reported in the literature. The effects of TCs are mainly aesthetic and functional. The management requires a sufficient knowledge of the present clinical entity and the problems associated with it. Early detection and treatment plays a very vital role in avoiding the future complications. The present case reports a 25âÂÂyearâÂÂold male patient with a facial TC on the mandibular left central incisor in which a prophylactic enameloplasty was carried out to avoid the stagnation of debris and stain.

Talon cusp (TC) is defined as a supernumerary accessory talon shaped cusp projecting from the lingual or facial surface of the crown of a tooth and extending for at least half the distance from the cemento-enamel junction to the incisal edge.[1] It was first described by Windell in 1887 and then reported by Mitchell in 1892.[2] The name TC was given by Mellor and Ripa[3] due to its resemblance to an eagle’s talon. Various other terms have been used to describe this trait, including dens evaginatus, supernumerary cusp, horn, hyperplastic cingulum, evaginated odontome, cusped cingulum, accessory cusp and supernumerary lingual tubercle.[4] The prevalence of TC was reported as 0.55% in Jordanian,[5] 0.6% in a Mexican,[6] 2.5% in a Hungarian,[7] 5.2% in a Malaysian population[8] and 7.7% in a northern Indian population.[9]

Normally, TC is seen on the palatal or lingual surfaces of the maxillary or mandibular anterior teeth, Very few cases of facial TC have been reported so far in the literature.[13] The effects of TCs are mainly aesthetic and functional. The management requires a sufficient knowledge of the present clinical entity and the problems associated with it. Early detection and treatment plays a very vital role in avoiding the future complications. The present case reports a 25-year-old male patient with a facial TC on the mandibular left central incisor in which a prophylactic enameloplasty was carried out to avoid the stagnation of debris and stain.

The present case report is about a 25-year-old male patient who reported to the dental clinic for a routine dental check-up. The patient’s medical history was non-contributory. No abnormalities were noted on general examination. On intraoral examination, a TC was seen projecting from the facial surface of the crown of mandibular left central incisor extending from the cervical aspect of the crown to the incisal edge [Figure 1]. 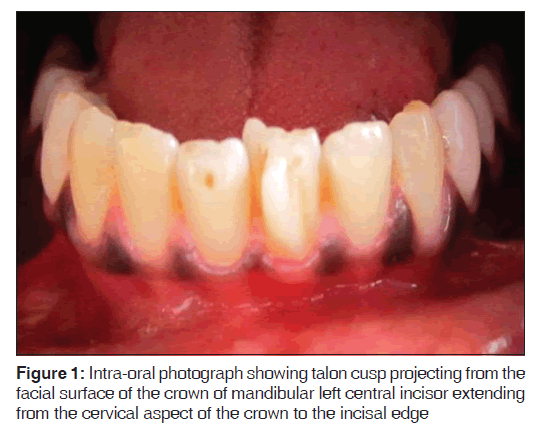 Figure 1: Intra-oral photograph showing talon cusp projecting from the facial surface of the crown of mandibular left central incisor extending from the cervical aspect of the crown to the incisal edge

Brownish extrinsic stains with stagnation of the debris were noticed on either side of the TC. It was not associated with caries and there was no evidence of loss of vitality of the tooth. No periapical changes were noticed intra-oral periapical radiograph revealed an inverted V-shaped radiopaque structure originating from the cervical third of the root, superimposed over the crown of the mandibular left central incisor [Figure 2]. Since the patient was clinically asymptomatic except for the stagnation of debris and the stains it was decided to do a prophylactic enameloplasty of the TC to avoid the future complication. This was followed by topical application of desensitizing agent (potassium nitrate in the paste form) and fluoride to reduce the sensitivity and stimulate reparative dentine formation for pulp protection respectively. Regular clinical and radiographic follow-up was advised. 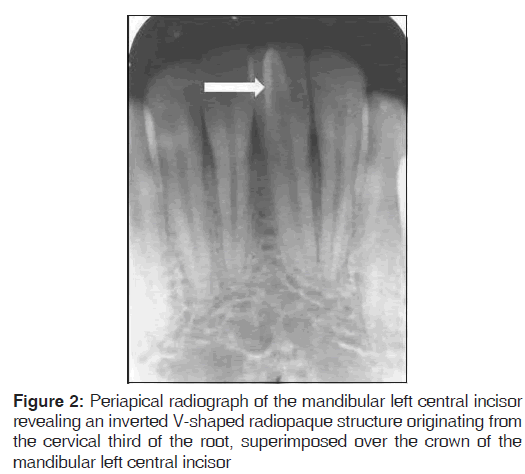 Etiology for the formation of the TC is unknown. A multifactorial etiology including both genetic and environmental factors has been proposed.[11,15,16] An aberrant hyperproductivity of the dental lamina has also been found to be responsible for its occurrence.[16,17] TC may occur in isolation or with other dental anomalies such as mesiodens, unerupted or impacted teeth, peg-shaped maxillary incisor, dens invaginatus, cleft lip, bilateral gemination and fusion.[13] It has also been associated with some systemic conditions such as Mohr syndrome (orofacial-digital II), Sturge-Weber syndrome (encephalotrigeminal angiomatosis), Rubinstein-Taybi syndrome, Incontinentia pigmenti achromians disorder and Ellisvan Creveld syndrome.[13] Most of the times it occurs unilaterally but bilateral cases, including multiple and double TCs[15] have also been reported. In the present case, no other associated anomaly was appreciated.

There is a wide variation in the size and shape of this anomaly. Hattab et al.[11] has classified it into three types as talon, semi-talon and trace talon based on its shape and size. The present case can be classified as Type I talon according to the Hattab et al. classification as it was found projecting on the facial aspect from the cemento-enamel junction almost to the incisal edge of the mandibular right central incisor.

It is composed of enamel, dentine and a varying amount of pulp tissue. It has been suggested that large TCs, especially those that stand away from the tooth crown are more likely to contain pulp tissue.[16] In the present case, the facial talon was a very prominent accessory structure and hence it was found mandatory to take a radiograph to access the periapical status of the tooth. Radiograph plays a very vital role in diagnosing the periapical pathologies associated with the TC. Radiographically, it may appear typically as a V-shaped radiopaque structure, as in true talon or semi-talon, or be tubercle-like, as in trace talon, originating from the cervical third of the root. The point of the “V” is inverted in mandibular cases.[13] This appearance varies with the shape and size of the cusp and the angle at which the radiograph is taken. In the present case, the tooth showed a classic appearance of the TC with no evidence of periapical changes.

The clinical problems associated with the presence TCs include stagnation of the debris predisposing to caries, periapical lesions, irritation of tongue during speech and mastication, other soft-tissue irritation, compromised esthetics, occlusal interference which may lead to accidental cusp fracture. Displacement of the affected tooth, temporomandibular joint pain and periodontal problems because of excessive occlusal force also seen.[17] A large TC when present on the facial aspect is unaesthetic and presents functional and pathological problems. Functional complications include occlusal interference and trauma to the lip. The deep grooves which join the cusp to the tooth may also act as stagnation areas for plaque and debris, become carious and cause subsequent periapical pathology.[3] In the present case, the facial TC served as a source of stagnation of the debris and brownish stains on the labial aspect of the tooth however there was no evidence of caries or periapical pathology.

Management of the TC depends on individual presentation and complications. Small TCs are asymptomatic and need no treatment.[11] The presence of deep developmental grooves, require simple prophylactic measures such as fissure sealing and composite resin restoration.[3] In case of occlusal interference, the reduction of the bulk of the cusp gradually and periodically followed by topical application of the desensitizing agents and fluoride can be considered.[18] Sometimes total reduction of the cusp with calcium hydroxide pulpotomy[19] or in severe cases root canal therapy may also be indicated. Orthodontic correction may become necessary when there is tooth displacement or malalignment of affected or opposing teeth.[20]

In this case, it was decided to do prophylactic enameloplasty to avoid stagnation of the debris followed by topical application of desensitizing agent and fluoride to reduce sensitivity and stimulate reparative dentine formation for pulp protection. The patient was advised a regular clinical and radiographic follow-up.

Facial TC, although unusually seen, needs to be diagnosed and managed appropriately to prevent further complications. Our case report attempts to highlights this unusual anomaly occurring in an unusual site.