Mesenchymal Chondrosarcoma of Posterior Maxilla: Report of a Case with Brief Literature Review

Mesenchymal chondrosarcomas (MCs) are infrequent, slowâÂÂgrowing malignant tumors of head and neck region affecting both bone and soft tissues. It represents approximately 1% of all chondrosarcomas. They usually occur in the middle aged individuals, but rarely seen in young patients. It is commonly found in the ribs and jaws. Involvement of the jaws is evident in 22âÂÂ27% of cases of MC. Most commonly, MCs are painless and occurs in the anterior portion of maxilla. Maxillofacial MCs are aggressive, has a tendency for recurrence and late metastasis to lung, bone, and lymph nodes, and is associated with an overall poor prognosis. Histopathologically, it is characterized by a biphasic pattern consisting of areas of hyaline cartilage mixed with small cell malignancy. Very few case reports involving the posterior maxillary region has been reported. This article reports a rare case of MC along with a review of the pertinent literature.

Mesenchymal chondrosarcomas (MCs) are relatively rare malignancies of bone and soft tissue with cartilaginous differentiation. It was first described by Lichenstein and Bernstein in 1959 as a separate entity of chondrosarcomas (CS) from which it must be differentiated.[1] Usually MCs of the head and neck region arise from the maxilla, with relatively few arising from the mandible.[2] Females are more frequently affected when compared to males. It is frequently seen in younger age group compared with conventional CS.[3] MC is described as a biphasic tumor with areas comprising of spindle cell mesenchyme interspersed with areas of chondroid differentiation.[4] Although many cases MC of the jaw have been recorded, only few cases of MC of the posterior maxillary region have been published. We, hereby, present a rare case of MC of posterior maxilla in a young male.

A 24‑year‑old male patient reported with a complaint of growth over the palatal aspect of the posterior maxilla. The growth had been present for 4 weeks and rapidly increased to the presented size. The patient reported difficulty in chewing and speaking and there was no history of any trauma. Extraoral examination revealed mild facial asymmetry on right side. There was no cervical lymphadenopathy, and the cranial nerves were normal on examination. Intraoral examination revealed an nontender growth measuring about 4 × 3 cm in the palatal aspect of the posterior maxilla between the first and third molar [Figure 1]. On palpation, the growth was multinodular, fixed, indurated, and hard in consistency. Routine blood investigations were within the normal limits. Periapical and panoramic radiographs revealed a radiolucent lesion with diffuse margins, which had displaced the roots of the right maxillary molars. Paranasal sinus radiographic view revealed ill‑defined haziness in right maxillary sinus region [Figure 2]. Computed tomography showed an expansile lytic lesion involving the right maxillary alveoli region. Thinning of the cortex with a cortical break was noticed. An incisional biopsy was performed under local anesthesia, which revealed a biomorphic pattern with focal areas of relatively mature cartilage formation and areas of highly cellular tissue composed of small round or spindle‑shaped cells [Figures 3 and 4]. These findings were suggestive of MC. The patient was advised a segmental maxillectomy, to which the patient consented. Patient underwent the surgery under general anesthesia. No tumor tissue was detected in any of the regional lymph nodes. The patient’s postoperative period was uneventful. The patient is continuing to receive routine follow‑up at the time of writing (around 3 years) and is doing well presently, with no evidence of any recurrence. 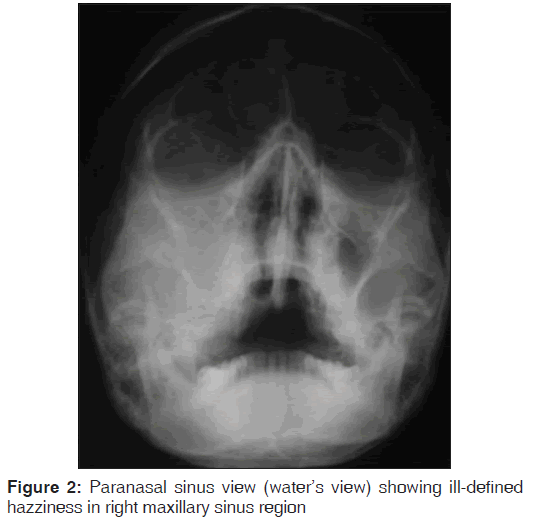 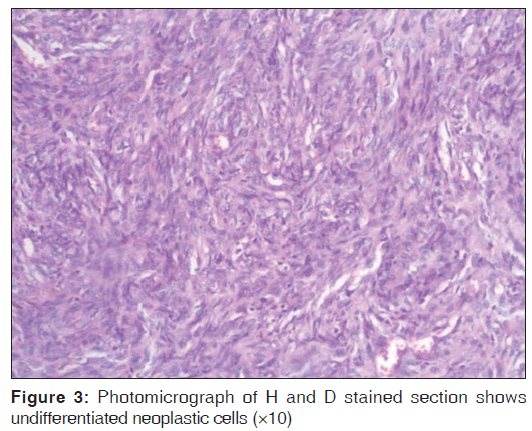 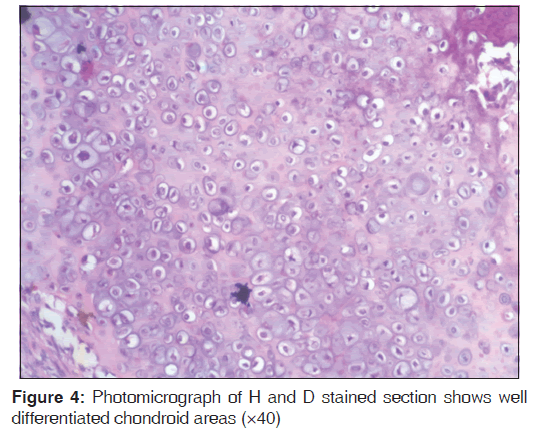 MCs are rare subtype of chondrosarcoma, constituting approximately 3–9% of all CS.[1] The exact pathogenesis and biologic behavior of the MCs in head and neck is not yet fully understood. Identification of a novel gene HEY1‑NCOA2 fusion appears to be diagnostic for MCs, which is absent in other subtypes of CS.[5] Most MCs of the head and neck region occurs primarily in the anterior maxilla, where pre‑existing nasal cartilage is present; others are found in descending order of frequency in the body of the mandible, the ramus, coronoid or condylar process, mental symphysis or from remanants of Meckel’s cartilage the nasal septum, and the paranasal sinuses.[6,7] In the present case, epicenter of the tumor was in the posterior maxilla. To the best of our knowledge, only few cases of MC of maxillary posterior region have been reported in the literature.

The literature review of MCs of head and neck reveals female predilection with 1.6:1 female to male ratio; no gender predilection for MC in the rest of the body has been reported. It is frequently found in adults between 2nd and 3rd decade of life, the average age for MC in the maxilla was 29.7 years. More than half of cases of MC in the maxilla occurred between ages 10 and 30 years. CS of the head neck occurs most frequently in the third to 6th decade of the life as compared to MC, which usually occurs in second to 3rd decade of life.[7,8]

The majority of MCs are asymptomatic, although some patients present with rapidly invasive swellings, resulting in loosening of the teeth, widening of the periodontal ligament space and expansion of the cortical plates. All these features were also noted in the present case. The most common reported symptom was swelling/mass in 68% of cases, followed by nasal obstruction (32%), epistaxis (32%) and tooth mobility (24%).[8] The duration of signs and symptoms before diagnosis ranged from 2 weeks to 4 years and in most cases, did not exceed but a few months. In the present case also the duration between onset of symptoms and diagnosis was 4 weeks.

Radiographically, it is difficult to distinguish between MC, other cartilaginous neoplasms or osteogenic sarcoma, thus there is no characteristic radiographic appearance as such. Maxillary MC presents as a radiopaque or mixed mass that commonly invades the maxillary sinus.[8,9] The radiographic appearance of the present case showed diffuse radiolucent areas causing displacement of teeth without calcification.

Histopathologically, MC are characterized by a biphasic pattern, with a sheet‑like proliferation of small undifferentiated spindle or round cells surrounding discrete nodules of differentiated hyaline cartilage. Histologically, the lesion must be differentiated from similar other lesions like hemangiopericytoma, Ewing sarcoma, leukemia/lymphoma, rhabdomyosarcoma, malignant melanoma and small cell osteosarcoma.[8]

The detection of type II collagen in the matrix component of MC was a sensitive marker for the identification of this tumor.[9,10] The expression of type II collagen is a specific indicator for MC as compared to other small cell sarcomas such as Ewing sarcoma, synovial sarcoma, and hemangiopericytoma. The immunohistochemical profile of MC lacks the S‑100 protein expression, which is typical of most CS with chondrocytic differentiation. MC tumor cells are positive for CD99.[9] Molecular profiling analysis revealed that mesenchymal chondroblastic cells possess pathways that incorporate protein kinase C alpha and platelet derived growth factor receptor alpha signaling as well as anti‑apoptotic bcl‑2 expression. Hence novel chemotherapy regimens might be designed to target the pathways to design selected therapy for MC.[11] Naumann et al. identified a distinctive marker, translocation der (13;21) (q10;q10) in MC, which appears to be unique to this neoplasm.[12]. Wang et al. have reported that the novel gene HEY1‑NCOA2 fusion appears to be the diagnostic gene fusion in MCs.[5]

Surgical excision of all the involved structures with negative margins is the primary treatment choice for MC, regardless of the anatomic site. The role of radiotherapy and chemotherapy is unclear. Although not statistically significant, patients treated with postoperative radiotherapy and chemotherapy seemed to show an increased survival rate.[3] Segmental maxillectomy was carried out in our case. The overall prognosis for maxillary MC is poor with late recurrence. Metastasis may occur at a relatively high frequency. Adequate treatment and long‑term follow‑up are required for patients with MC of the maxilla.[13]

The present case had some features that differed from the other reported cases. First of all, the location of the tumor was in posterior maxilla, which is quite unusual. Secondly, the clinical presentation simulated an aggressive lesion like a carcinoma.

The dental clinician plays an important role not only in the recognition of symptoms and avoidance of misdiagnosis, but also in the multidisciplinary management of complicated jaw lesions. Clinical and radiographic features of MC are varied; the incidence of this lesion in unusual locations like posterior jaw with an ill‑defined feature and ossification could lead to clinician error and delayed treatment. It is an aggressive neoplasm with a high tendency for recurrence and delayed metastasis. Hence, patient should be kept under long term surveillance also.