Multiple Intussusceptions Associated with Polycythemia in an Anabolic Steroid Abuser , A Case Report and Literature Review

Intussusceptions are generally associated with mechanical lead points or localized inflammation that function as foci for intestinal telescoping. We present the case of a patient whose abuse of anabolic steroids resulted in the development of multiple simultaneous intussusceptions. Our patient had no additional identifiable risk factors for intussusception. Consistent with previous reports, corticosteroid induced polycythemia and its consequent hyperviscosity led to intravascular sludging and mesenteric ischemia with associated bowel wall thickening. The localized intestinal induration then served as mechanical foci for intussusception. Due to the illicit nature of anabolic androgenic steroid (AAS) abuse, the physiologic effects of supraphysiologic doses are sparsely reported and poorly understood. The scope of AAS abuse and its consequences are likely underâÂÂreported and underâÂÂrecognized within the medical community. Our case presented a unique diagnostic and therapeutic challenge with which we aim to increasing awareness and clinical suspicion for AAS among healthcare personnel.

Androgens are hormones that are based on the structure of testosterone and act on various tissues via androgen receptors to produce anabolic effects (i.e., Increasing protein synthesis), as well as androgenic effects, (i.e., Development of secondary sexual characteristics). [1,2] In addition, they displace glucocorticoids from their respective receptors, exerting an anti-catabolic effect, which also promotes protein synthesis. [2,3] Androgen receptors are found in bone, adipose tissue, skeletal muscle, brain, prostate, liver, kidney, and reproductive tissues, which accounts for both their desired and adverse effects. [2] Anabolic-androgenic steroids (AAS) do possess medical indication, primarily in androgen replacement therapies for patients with established androgen deficiencies; [1] however, AAS are frequently abused by individuals interested in capitalizing on their effects.

Anabolic-androgenic steroids use and abuse are important concerns for the medical community, as their utilization has been steadily increasing over the past four decades, with a global lifetime prevalence rate for AAS use of 3.3%; use by males (6.4%) was significantly higher than that by females (1.6%). [3,4] Professional athletes are a population classically associated with AAS utilization due to the potential for an increase in muscle strength, [1,3,5] as well as fat-free muscle mass. [3] However, these benefits do not come without risks. Some reported adverse effects included virilization in female users, truncal acne, weight gain, gynecomastia, polycythemia, congestive cardiac failure and myocardial infarctions, dyslipidemia, mood alteration, and renal failure. [1,2,6-9] In addition, the abuse of AAS has expanded beyond the scope of professional athletes to include high school students (1–5%), individuals (i.e., recreational body builders), focused on physique (13.5%), as well as certain occupations (i.e., police officers). [3,10]

Due to the predominantly illicit nature of AAS abuse, studying side effects and complications of supraphysiologic doses is inherently difficult. Most clinical studies evaluate low-dose AAS for the purposes of hormone replacement, either due to androgen deficiency in hypogonadal syndromes, cachexia (i.e., conditions such as human immunodeficiency virus, chronic obstructive pulmonary disease) or age-related declines (i.e., testosterone deficiency), although the last area remains controversial. [6,7,11-13] Normal daily endogenous production of cortisol would equate to about 10–50 mg of exogenously administered cortisol. Men require higher doses for physiologic homeostasis. [14,15] However, there are no specific guidelines on the appropriate dosing of AAS to mimic or supplement, normal physiologic hormone levels.

Bhasin et al. [5] has conducted one of the few randomized studies to look at the effects of supraphysiologic doses of AAS. In their trial, patients received weekly intramuscular doses of 600 mg of testosterone enanthate or placebo for 10 weeks. [5] However, the doses utilized were still substantially lower than those commonly utilized by athletes, who additionally tend to stack multiple AAS preparations in an attempt to increase the desired effects while decreasing potential adverse effects. [2,16] Therefore, case reports and retrospective studies have been the principal contributors in identifying common, as well as life-threatening, complications, which may potentially arise from AAS abuse. [2,3,17]

We present the case of a 34-year-old male with a past medical history of hypertension, hypercholesteremia, anxiety, acid reflux, and irritable bowel syndrome who presented with the complaints of severe cramping abdominal pain associated with nausea, vomiting, bright red blood per rectum, and constipation. The patient denied having similar symptoms in the past or any history of abdominal surgery. He had an upper gastrointestinal series 10 years ago, which was unremarkable except for a hiatal hernia. He is a body builder and admitted to the use of AAS. He was 1500 mg of testosterone/nandrolone, via intramuscular injection, per week for 3 months. 3 weeks prior to the presentation, he abruptly decreased the dose to 500 mg/week.

On presentation, he was found to be diaphoretic, in mild distress, with tachycardia at 100 beats/min and tenderness in the suprapubic region with no guarding, rebound tenderness or palpable masses. Laboratory studies were normal apart from an increased white blood cell count at 15.0, increased hemoglobin at 17.9 and increased hematocrit at 51.2%. He had mild changes in sodium (134), as well as blood urea nitrogen (24). He weighed 265 pounds, with a body mass index of 40.3. A computer tomography (CT) scan of the abdomen demonstrated mild diffuse nonspecific colonic wall thickening, with two separate areas of apparent short segment small bowel intussusception without evidence of obstruction [Figures 1-4]. 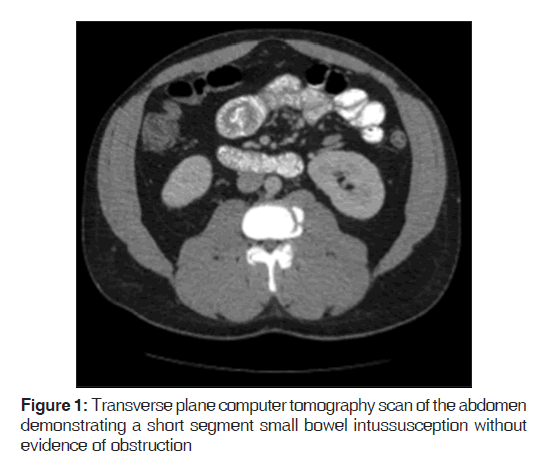 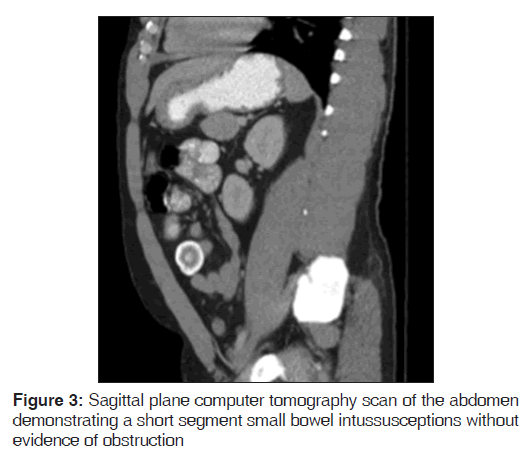 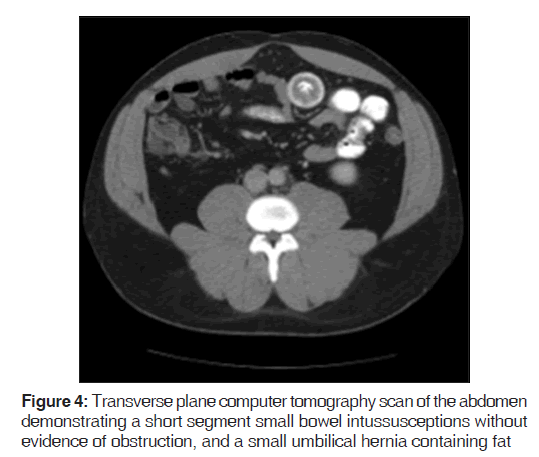 In addition, a small umbilical hernia containing fat was visualized. Our patient was subsequently medically managed, with pain control and hydration. A colonoscopy completed the day after admission demonstrated edema and erythema in the distal ileum and colon, most densely starting in the distal transverse colon and increasing within the rectum. There were no ulcers, polyps, tumors or sites of hemorrhage noted. Biopsies were taken from each section of the colon. The subsequent pathological evaluation indicated acute and chronic colitis from the descending colon forward and changes suggesting ischemic colitis in the rectum [Figures 5-7]. 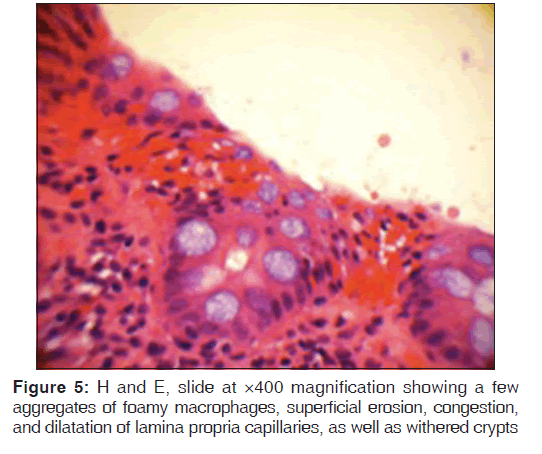 A follow-up CT scan was completed on the third day of admission but demonstrated no definitive intussusceptions [Figure 8]. There was no longer any overt colitis evidenced though there may have been an underlying inflammatory process based on submucosal lucency in the transverse colon. With the apparent resolution of the small bowel intussusceptions with conservative medical management, accompanied by a resolution of the patient’s pain, he was discharged home. 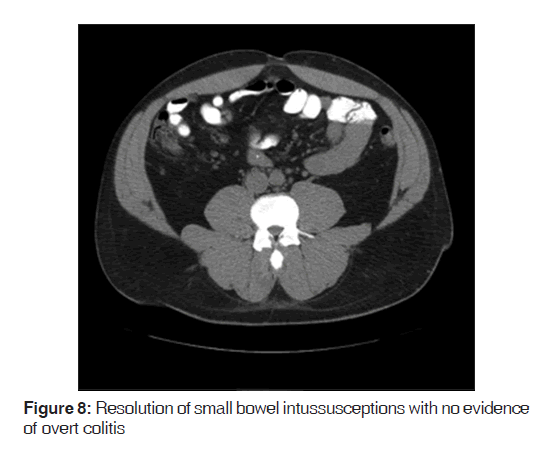 Figure 8: Resolution of small bowel intussusceptions with no evidence of overt colitis

Among other potentially dangerous adverse effects, AAS have been reported to increase hemoglobin concentrations. [1,7,8,17,18] This is consistent with our observation, where our patient was an active AAS user and presented with a significant increase in hemoglobin concentration. It is of note that older men (ages 60–74) are at a greater risk of developing hematocrits above 54%.[6] Coviello et al. [7] investigated the biochemistry that leads to this effect and have ruled out increases in erythropoietin levels, as well as expression of soluble transferrin receptor, the erythropoietin receptor in the bone marrow [7] as the causative mechanisms. [7] The current hypothesis is that AAS act by directly stimulating the bone marrow via a mechanism not yet determined. [7,19] Interestingly, Verwilghen et al. [8] even suggested that, based on measurements of peripheral blood, polycythemia seen in the setting of AAS abuse may be due to a decrease in plasma volume, demonstrating a compounding relative increase in hemoglobin concentration.

Polycythemia inherently places patients at an increased risk for ischemic events.[B, D, G] Stergiopoulos et al. [17] described an increase in ischemic cardiac events secondary to the polycythemia associated with AAS use. [7,17] McCulloch et al. [9] reported the case of a patient abusing AAS, who presented with multiple arterial thromboses, including the splenic and right renal arteries, reporting that the ischemic effects of steroids can affect larger vessels. [9] Similarly to our case, Magnusson et al. [20] published a case of polycythemia vera and associated small bowel obstruction, where laparotomy demonstrated transmural ischemia in the distal sigmoid colon and proximal rectum. Plackett et al. [19] also presented a case of colonic ischemia, with resulting thickening of the bowel walls that, they also postulated, acted as a lead point for an intussusception. However, unlike our patient, their patient presented with colonic ischemia secondary to portal hypertension. Similarly to our patient, was medically managed with supportive measures and demonstrated resolution of the intussusceptions on a repeated CT scan. [19]

Intussusception, although common in children, is a rare clinical finding in adults. Adults account for only 5% of all cases of intussusceptions, which are the cause of 1–5% of all intestinal obstructions in adults. [19,21,22] In adults, it is generally associated with an underlying mechanical lead point that serves as a focus for the intussusception (such as a benign polyp, lipoma, appendix, Meckel diverticulum or a tumor [i.e., lymphoma]). [23] Additional sources of lead points can include inflammatory pseudopolyps, arteriovenous malformations or localized inflammation (due to tuberculosis, cytomegalovirus, campylobacter, and Crohn’s disease). [19,21-23]

In the case we are presenting, the patient did not display any of these typical risk factors for his development of an intussusception. He had no personal or family history of polyposis, no intestinal malignancy or isolated infectious process. The only identified potential causative factor was the patient’s chronic use of AAS. Our case suggests, consistently with previous reports that, the patient’s use of AAS led to the development of polycythemia. [2,7,9,17,19,24] The consequent hyperviscosity likely leads to intravascular sludging and subsequent mesenteric ischemia with associated bowel wall thickening that subsequently served as a lead points in the formation of two short segment small bowel intussusceptions.

In general, surgical reduction is the preferred treatment in adults with intussusception. [21,22] This is due to the fact that intussusception is most commonly associated with a pathological lesion that leads to a telescoping of the intestine upon itself by virtue of creating a lead point. [19,21-23] However, in our case, as well as that of Plackett et al., the patient’s conditions resolved with hydration. [19] It remains uncertain whether decreased plasma volume or a directly mediated stimulation of the bone marrow are responsible for the hyperviscosity, which is associated with AAS abuse. [1,6-8,17] However, in cases of intussusception secondary to AAS abuse, the physiological process appears to be amenable to treatment with hydration, which decreases the degree of hemoconcentration. This could subsequently spare patients the need for surgical interventions. In our case, as the patient presented with intussusceptions without evidence of obstruction, medical management was justifiably and successfully implemented, even in the setting of multiple intussusceptions. As such, we propose that a trial of medical management may be indicated; even in those patients presenting with mild obstruction secondary to AAS induced ischemia, due to its unique pathology.

The physiologic process by which AAS induce ischemic events remains unclear and certainly postulates a field of further exploration, for follow-up studies. Currently, polycythemia and decreased plasma volume appear to mediate hyperviscosity, causing mechanical vascular obstruction. However, it has been reported that, androgens potentiate platelet aggregation via either an increased production of thromboxane A2 or a decrease in prostaglandin production. [9,24,25] This procoagulant state further places AAS users at an increased risk for ischemic events by compounding the hyperviscosity potentiated by increased hemoglobin concentrations. This direct procoagulant pathway activation, as suggested by McCulloch, Pilo, and Johnson et al.’s investigations, as well as other alterations of the pro and anticoagulant systems, including entities such as AAS induced vasospasm require further investigation as contributing factors. [9,24,25]

Our case presented a unique diagnostic, as well as therapeutic challenge since its presentation as a complication of AAS abuse, has not been overtly reported in previous literature. However, as our patient had no identifiable risk factors for the development of intussusception, the only potential cause was ischemic colitis secondary to polycythemia, attributable to our patient’s supraphysiologic AAS use. As it is ethically dubious to perform clinical trials with supraphysiologic doses of AAS frequently used by people aiming to capitalize on the anabolic effects, this case aims to illustrate an additional end point complication that can occur secondary to AAS abuse. Although, we cannot comment on the incidence of similar complications, clinical awareness, and increased suspicion will undoubtedly increase the diagnostic margin of this process. As such, it is important for clinicians to consider intussusception, as well as other ischemic complications, when treating patients with a history of AAS abuse.