Multiple Peripheral Osteomas of Forehead: Report of a Rare Case

Osteoma is a benign slow growing osteogenic lesion, composed of wellâÂÂdifferentiated mature bone tissue, characterized by the proliferation of compact or cancellous bone, almost exclusively found in the head and neck region. Central, peripheral and extra skeletal are the three variants of osteoma. Trauma, inflammation, developmental disorders and genetic defects are considered as the etiologic factors. Paranasal sinuses are the favourite locations of peripheral osteoma of the craniofacial region; frontal and ethmoidal sinuses being the common ones. Although, peripheral osteomas are usually benign, innocuous lesions, their size and prominent location on the visible parts of the face makes the surgical intervention necessary. We report case of multiple peripheral osteomas of forehead, without involvement of the frontal sinus, which is a rare variety.

Osteoma is a benign slow growing osteogenic lesion, characterized by the proliferation of compact or cancellous bone, almost exclusively found in the head and neck region. It can be of central, peripheral or extra skeletal variety.[1] Various concepts have been suggested for the aetiology of osteoma, but the exact factor still remains unclear. The peripheral osteoma arises by centrifugal growth from the periosteum, while central osteoma centripetally from the endosteum. They are seen commonly associated with the nose and the paranasal sinuses, the commonest being the frontal sinus. The incidence of osteoma of frontal bone and frontal sinus ranges from 37-80% in the reported cases.[2] But isolated cases of osteoma of the forehead, without involvement of the sinus, are rare.

We report here, a case of multiple peripheral osteoma of the frontal bone, without involvement of frontal sinus, causing a great deal of aesthetic concerns for the patient.

A 39-year-old female patient reported with a complaint of facial asymmetry due to the presence of multiple swellings on the forehead. The swellings had been present for a period of around ten years. Patient didn’t give any specific history regarding the onset of the swelling. Patient noticed gradual increase in number and size of the swelling, since last three to four years. The swellings were not associated with a history of trauma or symptoms like pain, pressure sensation, paraesthesia and sinusitis. Only concern of the patient was related to the appearance.

On clinical examination, the patient appeared to be overall in good systemic health, except for the presence of the swellings, all the vital signs being within normal limits. Examination of the face revealed multiple, localized, oval shaped swellings on the forehead; located near the midline 3 cm above the glabella, the largest of which was of 4 × 4 mm in size [Figure 1]. The skin over the swelling was of normal in colour and texture, with no signs of ulcerations or scars. Similar, but smaller swellings were seen on the anterior portion of the scalp. The lesions were hard, non-tender and non-bleeding with smooth surface and diffuse margins. Fluctuancy, reducibility, compressibility and pulsatility were absent. The lesions were fixed to underlying bone, but overlying skin was pinchable. Regional lymph nodes were not involved. Lateral skull and lateral cephalometric projections were taken, which revealed localized areas of thickening of outer cortical table of frontal bone [Figure 2]. A computed tomography (CT) study of the head and neck revealed multiple lentiform hyper dense lesions involving the outer table of frontal bone [Figure 3]. The lesions appeared to be well defined and with its densities matching that of the osseous structure of the surrounding areas, it suggested the diagnosis to be a benign bony lesion. Based on the reported history, clinical and imaging findings we arrived at a diagnosis of multiple peripheral osteomas of frontal bone. 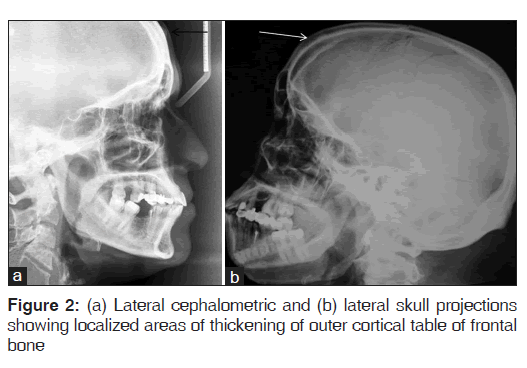 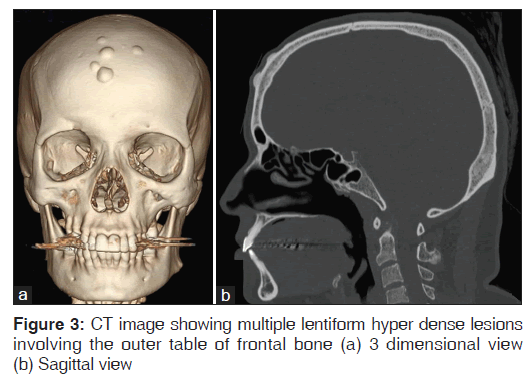 Surgical removal of the bony masses was done under general anesthesia and the specimen was sending for histopathologic examination. Patient reported with no symptoms on follow-up visit one month after the surgery [Figure 4]. 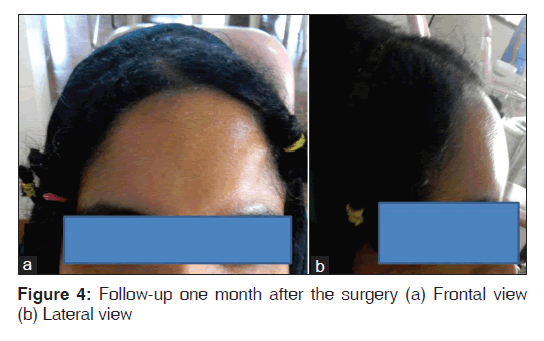 Figure 4: Follow-up one month after the surgery (a) Frontal view (b) Lateral view

Osteoma is a benign, osteogenic neoplasm composed of well-differentiated mature bone tissue, occurs due to proliferation of either compact or cancellous bone, usually an endosteal or periosteal location. Based on the location they can be of three types: Central (endosteal), peripheral (paraosteal, periosteal or exophytic) or extra skeletal (osseous choristoma);[1] the present case being a peripheral variety.

Many factors responsible for osteoma formation have been suggested, which include: Injury, inflammation, developmental disorders, genetic defects, Calcification of a polypus sinus, alteration of the calcium metabolism, metaplasia, and muscular theory.[3] But the exact pathogenesis of the osteoma has not been accurately explained. It has been suggested by many investigators that osteoma could be a reactive condition triggered by trauma, even minor that is unlikely to be remembered by the patient on a later date.[3] In the present case patient could not recall any trauma to that area.

Osteoma can arise at any age, but more frequently seen between the third and fifth decades. It has got a slight male predilection.[4] The case reported here is of a 39-year-old female. Paranasal sinuses are the favourite locations of peripheral osteoma of the craniofacial region, frontal and ethmoidal sinuses being the common ones. External auditory canal, orbit, temporal bone and pterygoid processes are the other locations.[5] The one reported here is a case of osteoma of the frontal bone without involvement of the sinus, which is very rare.

The tumour is often slow growing and asymptomatic, diagnosed incidentally on radiographs. But later on it can achieve a faster growth rate, as the rate of osteogenesis increases, and can cause deformation of the bone and compression of the adjacent structures. They usually appear as unilateral, sessile or pedunculated, well circumscribed, mushroom-like masses, ranging from 1.5 to 40 mm in diameter.[6] All these features are consistent with the present case, except the fact that the lesions are seen on either side of the midline.

Conventional radiographic imaging is generally sufficient to diagnose an osteoma. It appears as an oval, radiopaque, well-circumscribed mass attached by a broad base or pedicle to the host bone cortex. Usually, the osteoma does not exhibit any destruction of the surrounding bone.[7] In Computed Tomography image, osteoma appears as a smoothly demarcated, frequently lobulated, homogenously hyper dense mass. Better resolution and more precise localization are possible with CT scanning, especially with 3D reconstruction. CT scans are also help to rule out Gardner’s syndrome, where multiple osteomas, impacted supernumerary teeth and odontomas may be present.[8] Since all the other features are not evident from CT scan, this case must be a nonsyndromic variety of multiple osteomas.

There are three types of histologic variants for osteoma. They are compact or ivory type, cancellous, trabecular or spongy type and mixed type.[11] The recommended treatment is surgical excision. Recurrence is extremely rare and there are no reports of malignant transformation, which makes the treatment of asymptomatic lesions controversial.[12] In our patient surgical correction was done for cosmetic reasons. Patient reported with no symptoms and no sign of recurrence was revealed on follow-up visit one month after the surgery.

The peripheral osteomas are usually benign, innocuous lesions. However, their size and prominent location on the visible parts of the face can affect the appearance of a person and there by the quality of life, which necessitate the surgical interventions.