Orchidectomy for Testicular Tumour in Children; Pleading for Caution

Testicular mass in a child requires urgent evaluation with an initial aim of making a prompt diagnosis and offering definitive treatment as soon as possible. We share our experience in the management of a dilemmatic scrotal mass in a 14-year-old boy. Clinical evidence was highly suggestive of malignancy warranting orchidectomy. Histopathological analysis of the mass revealed a testicular schistosomiasis. We emphasize that a high index of suspicion is required in the management of testicular masses in children living in areas that are endemic for schistosomiasis. We also advocate the need for routine frozen section in this condition whenever possible.

Male genital schistosomiasis can affect the prostate gland, epididymis and testes. [1] Testicular schistosomiasis was first described in 1911 in an Egyptian patient presenting with hemospermia. [2] It usually mimics a malignant lesion presenting with a painless small nodule in the testis. [3] It may at times present as a mass within the scrotum. Other rare sites of schistosomiasis in the genital tract include the spermatic cord and seminal vesicles. [4]

Males with testicular schistosomiasis may present with infertility amongst other symptoms. This may be due to the occlusion of the spermatic venous plexus by ova and subsequent granuloma formation which may result in testicular infarction. The pathogenicity of schistosomiasis originates from their eggs which cause severe inflammation, usually granulomatous in the tissues of their hosts. [5]

A 14-year-old boy had presented in our hospital with a progressive painless right scrotal swelling of 1year duration, associated with weight loss. There was a positive history of terminal haematuria that was last observed a year before the mass was noticed. A right hemi-scrotal mass was found and it measured 4x6cm. The mass was hard and craggy in consistency. The overlying skin was intact with no differential warmth and it was not tender, hard and craggy in consistence. Urine microscopy showed no ova of schistosome, scrotal ultrasound showed an enlarged right-sided testicular mass with a hyperechoic pattern and increased hypervascularity suggestive of malignancy [Figure 1]. No sonographic evidence of Para-aortic lymphadenopathy was seen and no ascites. Alpha fetoprotein (AFP) was raised; 103 ng/ml (0-9 ng/ml) but βHCG was normal. Full blood count showed a relative oesinophilia. 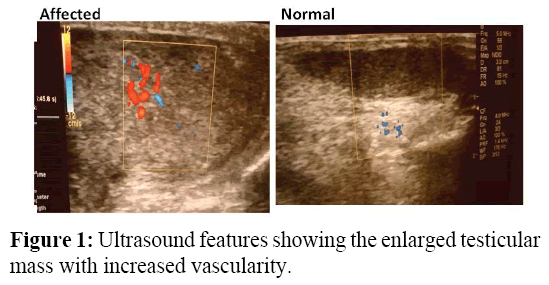 He scrotal exploration and a right radical orchidectomy via an inguinal approach. Intra-operative findings revealed a morbidly adhered hard right testicle and multiple nodules along the spermatic cord. An isolated hard mass was also seen at the upper pole of right testis.

Repeat serum alpha fetoprotein 6 weeks post operatively was 82 ng/ml. It subsequently dropped to a value within the normal range of 0.9 ng/ml two weeks after anti-helminthic therapy (praziquantel 40 mg/kg) was given. The patient’s condition has been satisfactory after 18 months of follow up.

Sections show testicular tissue with a distorted architecture. Some primitive seminiferous tubules were seen. There was however formation of granulomas with central activated histiocytes and a peripheral rim of mononuclear cells consisting of lymphocytes and plasma cells. The inflammatory cell infiltrate was also replete with a lot of eosinophils. Areas of fibrosis as well as eosinophilic extracellular material (Splendore-Hoepli phenomenom) were also seen. [Figure 2] There were a few foci that showed the ova of Schistosoma within the granulomas. [Figures 3 and 4]. 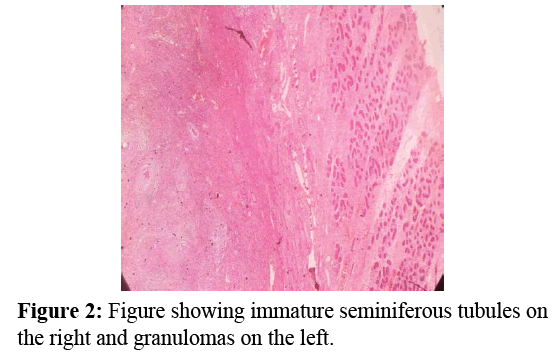 Figure 2: Figure showing immature seminiferous tubules on the right and granulomas on the left.

Figure 3: Figure showing a granuloma with an enclosed schistosoma ovum. 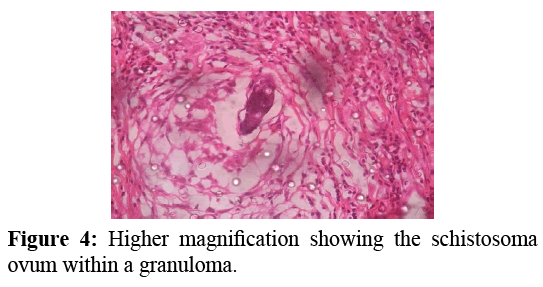 Figure 4: Higher magnification showing the schistosoma ovum within a granuloma.

Testicular Schistosomiasis is an extremely rare condition of the testis. In recent times, increasing incidence worldwide has been reported. [6] It has varying presentation making diagnosis sometimes difficult. It can present as acute scrotal pain, primary infertility, testicular mass. [7,8] It may also present with haemospermia. [9]

Although, this patient did not present with scrotal pain, other authors have reported a history of acute scrotal pain with testicular schistosomiasis. [10,11] Pointers to the fact that this patient could have had a Schistosomal infection were the positive history of terminal haematuria a year prior to presentation as well as the relative eosinophilia on full blood count. But the terminal haematuria resolved spontaneously before the mass was noticed. Also, there was no other evaluation to support the relative oesinophilia. However, a positive history of weight loss and features of a painless, hard, craggy testicular mass coupled with a raised AFP further strengthened the clinical suspicion of testicular malignancy in this patient. Also, while some authors have reported a predominance of a right-sided testicular schistosomiasis, [12,13] report by Hassan et al. showed no preponderance. [14] In our patient, a right testicular presentation was observed. This may call for further research.

A hormonal marker has never been reportedly raised in testicular schistosomiasis. We however found a raised AFP in the index case which was also mimicking a testicular malignancy. More importantly, the AFP level dropped to normal after treatment, which is what occurs in malignancy. The reason for this elevation was not clear.

Various reports on evaluation with ultrasound have given varying appearances. These include; heterogeneous echotexture, hypoechoic lesion /nodules with hypervascularity. [15-18] In this index case, a hyperechoic, hypervascular pattern was observed comparable with the sonographic features described by Soans et al. [15] This is one of the limitations of ultrasound in evaluating such lesions. This suggests that the sonographic features for testicular schistosomiasis are not yet standardized. MRI has been reported to have better resolution in soft tissue masses in children [19] but this tool is not readily available in our setting. Recent advancements in ultrasound using sonographic elastography have improved evaluation of testicular tumours as it now afford consistency determination, which have been found to differentiate benign from malignant lesions. [20] The non-availability of sonoelastography limited our evaluation of the lesion in this patient.

Testicular schistosomiasis is a notorious mimicker of testicular malignancy. A high index of suspicion is required in children to delineate this pathology from malignant lesions which would also afford the patient right treatment and unnecessary surgery. Elevated AFP has not been shown in any report; we suggest that more researches be done to understand this observation. Emergency frozen section histopathological appraisal of a testicular mass may prevent the need for an orchidectomy. Most reports where orhidectomy was performed in our setting did not employ frozen section biopsy; this may be as a result of its non-availability. This may suggest why cases of avoidable orchidectomy still occur in this environment. Hence, we emphasize the dire need for frozen sections in all cases of testicular tumour before definitive management plans. In our setting where frozen section may not always be available, we recommend an initial incisional biopsy.