Background: Fibro-osseous lesions comprise a group of disorders characterized histologically by replacement of normal bone by cellular fibrous tissue within which varying amount of predominantly woven bone and acellular islands of mineralized tissue develops. These lesions commonly affect the jaw and craniofacial bones. Identification of the specific entity is crucial due to treatment variations. This study aimed to describe the spectrum, age, sex and morphological pattern of fibro-osseous lesions in Port Harcourt, as well as compare the findings with previous studies done in Nigeria and other parts of the world. Materials and Methods: This was a 7 year retrospective study from 2nd January, 2008 to 31st December, 2014 of all fibro-osseous lesions recorded in the oral pathology/pathology registers of the University of Port Harcourt Teaching Hospital, Port Harcourt, Nigeria. Results: Thirty one cases of fibro-osseous lesions were diagnosed during the seven year study period, with age range from 6–65 years and mean age of 26.7 years. Female to male ratio was 1.8 : 1. Lesions were more frequent in the mandible (51.6%), than maxilla (45.2%) and frontal bone (3.2%). Ossifying fibroma accounted for the vast majority (21 cases, 67.7%) of fibro-osseous lesions distantly followed by fibrous dysplasia (6 cases, 19.4%) and other less frequent types. Conclusion: This study showed that ossifying fibroma was the predominant subtype which was consistent with most published reports in developing world. Due to close architectural structures of these lesions, a definitive diagnosis requires a thorough knowledge and correlation of clinical, radiological and histological findings.

Fibro-osseous lesions comprise a group of disorders characterized histologically by replacement of normal bone by cellular fibrous tissue within which varying amount of predominantly woven bone and acellular islands of mineralized tissue develops. [1] These lesions commonly affect the jaw and craniofacial bones. The histopathology of all fibro-osseous lesions are identical, although they range widely in clinical behavior. [2]

There is paucity of reports on fibro-osseous lesions in our setting. We therefore undertook this review to document and evaluate the pattern in Port Harcourt, South-South geopolitical zone of Nigeria, as well as to compare the findings with previous studies done in Nigeria and other geographical locations of the world.

Histopathology slides on all cases were retrieved and reviewed by the study authors. Fresh sections were cut from archival paraffin blocks when slides could not be retrieved. All specimens had been fixed in 10% formal saline, routinely processed and analysed. Diagnosis was based on world health organization new classification of fibro-osseous lesions. [6] The data was subsequently analysed using SPSS version 20 and presented as frequency tables.

Thirty one cases of fibro-osseous lesions were diagnosed during the seven year study period, with age range from 6–65 years, mean age of 26.7 years and peak age of incidence occurred in the 21–30 years group with 10 cases (32%) and closely followed by 11–20 years with 9 cases (29%). The youngest incidence was a 6 year old. There was slight female preponderance with an overall F: M ratio of 1.8: 1. Tables 1 and 2 depict the relative frequency, age distribution of different histopathologic subtypes and sex distribution of fibo-osseous lesions in Port Harcourt respectively. Lesions were more frequent in the mandible (51.6%), than maxilla (45.2%) and frontal bone (3.2%). Ossifying fibroma accounted for the vast majority [21 cases, 67.7%, Figure 1] of fibro-osseous lesions distantly followed by fibrous dysplasia [6 cases, 19.4%, Figure 2] and other less frequent types. Table 3 showed site distribution of fibo-osseous lesions in the facial bones of 31 patients.

Table 3: Site distribution of fibo-osseous lesions in the facial bones of 31 patients. 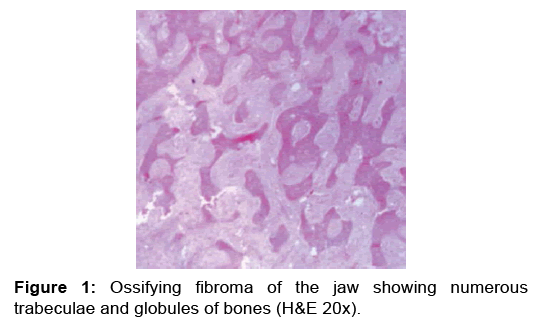 Ossifying fibromas are considered as benign fibro-osseous neoplasms which are principally encountered in the jaw bones. Although the cell of origin of ossifying fibroma is unknown, they may be derived from elements contained within the periodontal ligament space. Genetic aberrations are being linked to fibro-osseous lesions and that of ossifying fibroma is said to be HPRT2. [11] The radiologic appearance of most ossifying fibromas varies with the stage of development and the amount of bone matrix within the lesion. It usually appears as unilocular mixed radiolucent and radiopaque lesions with sharply defined boarders. [12] Histologically, ossifying fibroma showed prominent calcified structures (ossicles and cementicles) that appeared as eosinophillic or basophillic spherules of bone within a moderately cellular, dense stroma. [13] In this series, ossifying fibroma were seen most predominantly between the 11-20 and 21-30 years age categories, this agrees with most reports, but others have shown that it can occur at any age. [10,14] The appraisal showed female predominance with a female to male ratio of 2.5:1 which is in keeping with other reports. [15] There was almost equal site predilections with 11 and 10 cases occurring in mandible and maxilla respectively, this is at variance with most reports where mandible is the prefer site. [12,16]

Fibrous dysplasia is an anomaly of bone development characterized by harmatomatous proliferation of fibrous tissue within the medullary bone with secondary bone metaplasia, producing immature, newly formed and weakly calcified bone. It is a benign bone disorder of an unknown etiology, uncertain pathogenesis and diverse histopathology. [5] Radiologically, fibrous dysplasia shows radio-dense opacities with a ground glass appearance that blends into surrounding normal bone. [3] Histologically, it is characterised by a stroma of fibroblasts producing bony matrix without evidence of osteoblastic cells at periphery of bony spicules (osteoblastic rimming). This arrangement is sometimes described as Chinese letter pattern. [13] In this review, the peak age groups of fibrous dysplasia were 1–10 and 11–20 years which approximate the span from separate studies in other developing countries and elsewhere. [14,17] While the male predominance displayed in this study with male to female ratio of 2 : 1 correlate other reports, others documented female preponderance. [16,18,19] Mandible was the most common location which is at variance with most other reports. [10,20]

In this appraisal, there were only four cases of osseous dysplasia which may be due to their infrequent occurrence. [10] Our study was not free from the limitations of retrospective institutionalbased studies. This prevalence is likely a tip of iceberg of the true prevalence because not all patients avail themselves to orthodox medical care in our environment. This results in under-estimation of these lesions in our locality. Likewise, not all tissues get to our institution by virtue of the vastness of the study domain and attached cost histology incurred.

This study showed in conclusion, that ossifying fibroma was the most frequently occurring subtype of fibro osseous lesions of the jaws. The epidemiological variables remain similar to what obtains elsewhere in the developing countries. The close architectural structures of these lesions signal the needs for more advanced imaging, molecular testing and immunological assessment in making accurate diagnosis of these lesions