Potential Biomarker for Peri-Implantitis: A Cross-Sectional Study of Type I Collagen Levels in the Sulcular Fluid in relation to Cross-Linked N-Telopeptide and Calprotectin

Dental implants have been an effective treatment option with a predictable outcome to replace missing teeth from the past 20 years. This is well supported by a recent meta-analysis which demonstrated a 10-year implant survival rate of 96.4%. [1] However, in past years, there is an increased concern over the number of implant failures caused by peri-implantitis, which is found to affect 20-22% of the patients with implants. [2-4] Periimplantitis is clinically characterized by bleeding upon probing (BOP) and/or suppuration, and increased probing pocket depths (PPDs) compared to the initial depth at the time of implant placement. The clinical and radiographic parameters, such as probing pocket depth (PPD), bleeding upon probing (BOP), bone loss, recession, suppuration, and mobility, are routinely used for clinical diagnosis of peri-implantitis. [5] Such parameters are, however, highly sensitive and not precise enough to help the clinician to determine the onset, progression, and prognosis of the disease. Therefore, there is still a need for new methods or tools for early diagnosis of peri-implantitis and track the disease progression over time.

The diagnosis of peri-implant diseases using biomarkers in peri-implant sulcular fluid (PISF) is gaining considerable recognition. Biomarkers are considered to be more accurate than that of clinical indicators to assess inflammation and tissue deterioration around dental implants. They are widely used for a deeper understanding of peri-implantitis in conjunction with clinical parameters. Biomarkers can be measured through oral fluids such as saliva, gingival crevicular fluid (GCF), and PISF. [5]

The previous study has found an increased level of nuclear factor-κB (RANK), soluble RANK ligand (sRANKL), cathepsin-K, osteoprotegerin (OPG), and sclerostin in patients with peri-implantits. [6] Similarly, Ata-Ali et al., [7] demonstrated a significantly increased level of pro-inflammatory cytokines such as IL-1β, IL-6 IL-10, and TNF-α at the peri-implantitis sites compared to healthy peri-implant tissue. These factors and proteins in GCF and PISF are considered as diagnostic biomarkers for peri-implant diseases. This was well supported in a recent systematic review, which concluded that biomarkers and enzymes in PISF have a promising outcome in differentiating peri-implant disease from the healthy state. [8]

Calprotectin is an inflammation-related protein and has been demonstrated to predict periodontal disease activity. Previous studies have shown significantly high levels of calprotectin in periodontal disease relative to healthy non-diseased sites as estimated by their GCF levels. [9-13] Cross-linked N-telopeptide of type I collagen (NTx) is a common biomarker of bone resorption and is used as a diagnostic tool for several bone metabolism diseases including hyperparathyroidism, osteoporosis, and bone metastasis of cancer. [14,15] However, the role of a biomarker for bone loss in peri-implantits has found varied outcomes. [16]

Therefore, this study aimed to assess and compare the calprotectin and NTx levels in the peri-implant sulcular fluid (PISF) from implant sites with or without peri-implantitis.

The present study was conducted at the outpatient department clinics, outpatient department clinics, College of Dentistry, Riyadh Elm University. The institutional review board at the university approved the study with the registration number (FRP/2019/175/54). The study was in accordance with the ethical principles of the World Medical Association Declaration of Helsinki (2013). Patients were informed about the study protocol, and written consent was obtained before they participated in the study. Fifty patients who had received a single dental implant in the previous 5-10 years with the healthy or peri-implant diseased site were recruited. The patients had visited the OPD clinic for routine implant care or with the chief complaint related to the implant.

The patients were in the age group of 26 to 50 years with no underlying systemic conditions and no history of antibiotic intake in the previous three months. The recruited patients either belonged to the healthy or diseased group with 50:50 allocation based on the clinical examination. The patients’ details are presented in Table 1.

Table 1: Demographic details of the participants.

The diagnosis of peri-implantitis was based on the presence of perceptible inflammatory changes surrounding the periimplant soft tissues combined with bleeding on probing and/ or suppuration, increased probing pocket depths (PPDs), and progressive bone loss. If the baseline measurements for PPD and bone level were missing, probing pocket depth ≥6 mm with profuse bleeding and bone loss ≥ 3 mm was taken into consideration. [17]

Samples of PISF were collected from both the peri-implantitis and healthy peri-implant sites using sterile paper strips (Periopaper, Oralflow Inc., NY, USA). The sample collection site was isolated using cotton rolls, and the external soft tissue surface was air-dried gently for 5s. Any visible dental plaque was removed using a manual scaler. This was followed by inserting a paper strip into the gingival sulcus up to a maximal depth of 1 mm and held in the position for 30 s. Any paper strips contaminated with blood or pus was discarded, and care was taken to avoid any mechanical irritation of the sulcus. The samples were collected from mesial, distal, buccal, and lingual sites. The volume of the collected PISF was measured with the aid of Periotron 8000 (Pro-Flow Inc., NY, USA). The paper strips were then extracted into 200 μL sterile phosphatebuffered saline (PBS) by centrifugation, and the obtained fluid was stored at −80°C until further analysis.

The collected fluid samples were then sent to the laboratory for the detection of biochemical parameters. Calprotectin level was detected using a ready-to-use solid-phase enzyme-linked immunosorbent assay (ELISA) (Life Technologies (India) Pvt Ltd., India). The NTx level was detected using a competitive ELISA (Ostex, osteomark, Seattle, WA, USA). The detection of both the parameters was performed according to the instruction manual accompanied by the ELISA kit.

The PPD, expressed in millimeters, was measured as the distance between the margin of the peri-implant mucosa and the bottom of the sulcus. The measurement was performed at six aspects (mesio-buccal, disto-buccal, mesio-lingual, disto-lingual, midbuccal, and mid-lingual) around the dental implant. BOP was elicited after the insertion of a probe into the sulcus and gently probing of gingival tissue with the application of light pressure. The presence or absence of bleeding on probing was recorded as (BOP+) or (BOP-), respectively. [18] The GI scores were recorded using the modified Löe and Silness index. [19] The rate of alveolar bone loss was determined using the modified criteria, as described by Schie et al., [20] This technique determines the bone loss as a percentage of the original bone level, starting 1 mm below Cemento Enamel Junction (CEJ). [21] For the same purpose, an intraoral periapical radiograph was obtained using a standard parallel cone technique. [22]

All the data were analyzed using the Statistical Package for Social Sciences software (SPSS, version 16.0; SPSS Inc., Chicago, IL, USA). Descriptive data were presented as mean and standard deviations. Tukey post-hoc test was used for calculating the significant difference between healthy and diseased sites for each clinical and biochemical parameters. Spearman’s correlation coefficient was applied to determine the relationship between the clinical parameters and biochemical parameters (calprotectin and NTx). A p-value of less than 0.05 was considered significant. 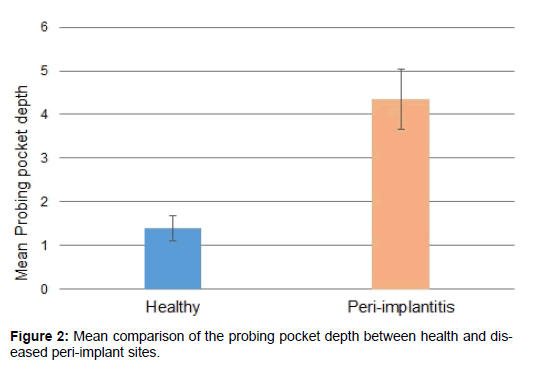 Figure 3: Mean comparison of the bleeding on probing between health and diseased peri-implant sites. Figure 4: Mean comparison of the bone loss between health and diseased peri-implant sites.

Replacement of missing teeth using dental implants has become a routine dental therapeutic procedure and is practiced worldwide with a high success rate. However, local inflammation and bone destruction around the dental implants is a concern, especially if it result in implant failure.[1]

Calprotectin is an inflammation-associated protein that is produced in macrophages/monocytes, leukocytes, and epithelial cells. Patients with inflammatory disorders such as ulcerative colitis, cystic fibrosis, and rheumatoid arthritis have demonstrated elevated levels of calprotectin. [24] Furthermore, they have also been detected in GCF and was shown to predict periodontitis. [11,12] Furthermore, GCF calprotectin levels have demonstrated to be well correlated with clinical parameters (GI, PD, and BOP). [12,13] All these results confirm the utility of calprotectin as an essential inflammatory biomarker for various periodontal pathologies. However, there is paucity in the literature regarding the comparison of PISF calprotectin levels of healthy and diseased peri-implant sites. The overall mean calprotectin in this study was found to be significantly higher (p= 0.003), approximately 2.5 fold higher in the diseased sites compared to the healthy sites.

In osteoclasts, degradation of bone type I collagen by cathepsin K leads to the formation of NTx as a product, which is soon released into blood and urine and is a precise biomarker of bone resorption. In patients with different bone pathologies like osteoporosis, hyperparathyroidism, and bone malignancies, NTx level is elevated in the blood and urine of the subjects. Hence, it can be used as a biomarker in these osseous metabolic pathologies. [15,25,26] Similar to calprotectin levels, the present study also demonstrated an increased level of overall mean NTx levels in peri-implantitis sites compared to the peri-implant healthy sites (p= 0.002). A positive correlation was observed between calprotectin levels and NTx levels in the PISF and the mean clinical periodontal parameters. Contrasting results have been found in the literature, where authors, after analyzing NTx levels in the GCF samples among periodontitis patients, showed the absence of NTx in the GCF of healthy subjects. [27] Recently Sakamoto et al., [16] analyzed and compared the calprotectin and NTx levels in PICF from dental implants with or without the peri-implant disease. The authors observed that in periimplant disease sites, PISF calprotectin and NTx levels were significantly higher in comparison to healthy sites. Furthermore, a significant correlation between PICF calprotectin levels and clinical parameters was observed, thus concluding that both calprotectin and NTx are potential biomarkers for periimplantitis diagnosis.