Chronic gastritis and peptic ulceration are prevalent in a high magnitude throughout the world.[1] Helicobacter pylori gastritis is the principal cause of chronic active gastritis and has major complications like gastric adenocarcinoma and mucosa associated lymphoid tissue lymphoma.[2] H. pylori is a gram negative flagellated bacillus that usually colonizes gastric pits under the mucus layer and in close association to gastric epithelial cells. Approximately, 50% of the normal population across the world harbor H. pylori, though only 10-20% of them become symptomatic.[3,4] There is an association of H. pylori infection with the hygiene related conditions, life-style, and economy with annual an incidence rate of H. pylori infection ≈ 4-5% in developing nations compared to that of ≈ 0.5% in developed and industrialized countries.[5]

There is a high prevalence of H. pylori infection in developing countries with up to 80% of the children under the age of 10 years are infected. In India, the prevalence of this infection is 22%, 56%, and 87% in the 0-4 years, 5-9 years and in the 10-19 years age group respectively.[6] There are many other etiological factors such as smoking, non-steroidal anti-inflammatory drugs (NSAIDS), and reflux of gastric juice (chemical gastritis) that are also implicated to cause chronic gastritis. H. pylori, though is regarded as the primary cause of gastritis, it can act as a synergist in addition with other etiological factors.[7]

A wide range of laboratory investigations are available for diagnosis of H. pylori. The tests belong to non-invasive group and invasive group. Non-invasive tests include, urea breath test, serological Immunoglobulin G (IgG) and Immunoglobulin M (IgM) detection, saliva and urinary antibody test, and stool antigen test.[8] The invasive tests are endoscopy based tests, which include histopathological examination, rapid urease test (RUT) and polymerase chain reaction. Whereas, invasive tests carry high sensitivity and specificity of >90%,[9] the role of non-invasive tests such as serology is limited in areas of high prevalence, because of non-distinction between previous and current infection. There is wide variation in prevalence of H. pylori infection in different regions of the world. Though, many studies have already been conducted in the past on the current topic, still there is a paucity of information about H. pylori infection prevalence in this part of Southern India. The present study was undertaken to estimate the prevalence of H. pylori infection among patients presenting with the dyspepsia and compute its association with gastrointestinal lesions, in a medical college hospital in Kerala, India. The hospital serves as a reference center for rural and suburban population of Ernakulam district, Kerala, India.

The study was conducted with 530 out patients and in-patients of Sree Narayana Institute of Medical Sciences-Ernakulam, Kerala, India. The study conducted was a cross-sectional prospective study, during the period of May 2010 to September 2012. The patients were selected on the basis of chief complaints of dyspepsia and the age of patients ranged from 14 to 86 years. Certain exclusion criteria were applied such as patients on proton pump inhibitor therapy or any antibiotic therapy within last 1 month. Endoscopy was carried out using the “Pentax’’ forward viewing esophago gastro duodenoscope. The patients were taken for upper gastrointestinal endoscopy after making them fast overnight. The endoscopy was considered normal on visualizing mucosa, which is pink in color, smooth, and lustrous. Two endoscopic biopsy fragments were obtained from each patient from the antrum. One biopsy fragment was sent to histopathology department in formalin container. Two sections of 4 μ thickness were cut from each block and mounted on two slides, one each on a slide. Slides were stained with normal H and E, stain and Giemsa stain. Histopathological assessment of gastric mucosa was carried out by a pathologist and grading was carried out for mononuclear cell infiltration, neutrophilic infiltration, atrophy, intestinal metaplasia, and density of H. pylori according to the visual analog of updated Sydney grading system[10] for reporting gastric biopsies. Microscopic assessment of slides was carried out using labomed microscope vision 2000, India. In positive cases, H. pylori appeared as light bluish rods in H and E stained slides with varying sizes (3-6 μ) on the luminal surface of mucosal cells. In Giemsa stain, H. pylori appeared dark blue in a light background. Diagnosis of reactive gastritis was based on the criteria laid by Dixon et al.,[11] and Niemelä et al.,[12] Another biopsy fragment was sent to microbiology department for RUT. RUT was performed by the following method: Urea (2 g) was dissolved in 20 ml double distilled water. 20 drops of phenol red were added to the solution and pH was adjusted between 6.8 and 6.9 by adding a drop of N/10 HCl, if pH was greater or N/10 NaOH if pH was less. Solution was faint yellow tint at this stage. This was transferred to sterile vial each containing 2 ml in each vial. Biopsy material was added and the temperature was kept constant at 35-37°C. Test was considered positive if color changed within 30 min and weekly positive if the change occurred after 2 h. 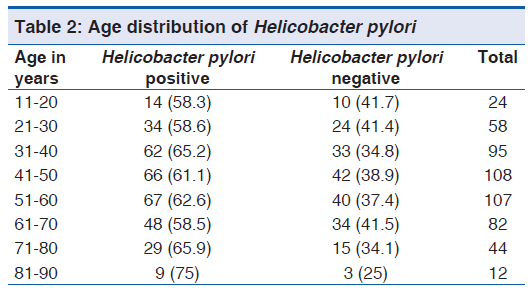 Gastritis, gastric ulceration, and gastric malignancies have many etiological factors, among which H. pylori infection is the principal cause. H. pylori infection is dependent upon many variables such as age, sex, socioeconomic status, dietary habits, genetic, and immunological factors. In the present study, we did not get a significant difference in H. Pylori prevalence according to gender. This is in concordance with the study results of Tarkhashvili et al.,[13] and Shokrzadeh et al.,[14] In contrast a study by Kaore et al.,[15] showed higher prevalence in male gender.

Age distribution of H. pylori infection did not show any trend towards increase or decrease in infection with the advancing age. Though maximum percent of H. pylori positivity −75% (9/12) was seen in the age group of 81-90 years, this can be attributed to much less number of individuals[12] studied in this group, compared to other age groups. There was no statistically significant difference in prevalence of H. pylori in the age group of <50 years and >50 years. This is similar to the observations laid by Tarkhashvili et al.,[13] though few studies such as Shokrzadeh et al.,[14] and Kaore, et al.,[15] reported increased H. pylori infection in age groups of 20-40 years than the older age group.

In the present study, the commonest identifiable lesion at endoscopy was gastritis (69%). The correlation of endoscopic abnormality with H. pylori infection was statistically highly significant with a P < 0.01, proving endoscopic changes to be a sensitive indicator of H. pylori infection. This is in contrast to the observation laid by Jemilohun et al.,[16] in which the correlation was not statistically significant. This can be attributed to a lower number of cases (86) being evaluated in their study compared to the present study (530).

Pathological reporting of 530 cases showed only 7.2% (42/530) of cases having serious gastrointestinal complications like peptic ulcers (GU and DU) and dysplasia/carcinoma. The association of these lesions with H. pylori infection was found to be statistically significant with 85.7% (18/21) patients with peptic ulcer and 90.5% (19/21) with dysplasia/carcinoma. This is comparable to the study of Zapata-Colindres et al.,[17] and Ahmad et al.,[18] documenting H. pylori prevalence in gastric ulceration patients to be 80% and 84% respectively. Cotran et al.,[19] reported the international association of H. pylori with gastric ulceration to be more than 70%.

The present study showed 10.5% of cases having reactive gastritis. There is rising incidence of reactive gastritis in rural and suburban population of developing nations like India due to increased duodenogastric reflux associated with changing life-style of the population, injudicious, and rampant use of drugs like NSAID, which are easily available and often being prescribed for musculoskeletal ailments.

The present study showed that dysplasia and carcinoma develop only in few of the cases having predisposing factors such as intestinal metaplasia and glandular atrophy. High H. pylori prevalence of 90.5% (19/21) in cases having dysplasia and carcinoma in this study, implies that the majority of gastric adenocarcinomas can be prevented with early stage detection of H. pylori and H. pylori eradication therapy. This is in concordance with the findings documented by an International agency for research on cancer, stating that 60% or more of gastric cancers world-wide can be prevented by the absence of H. pylori infection.[20]

In conclusion, there is a high prevalence of H. pylori infection in rural population of Ernakulam district of Kerala, South India. Though, the prevalence of H. pylori gastritis and associated abdominal symptoms is high in number, serious gastrointestinal complications develop in few. Absolute prevention of these complications and relief from the distressing abdominal symptoms can be achieved through early detection by conventional and affordable diagnostic methods and empirical treatment with anti H. pylori therapy. 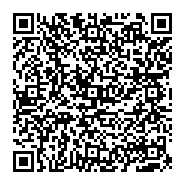