Prevalence of Hypertension and its Association with Waist Circumference in Adult Population of Block Hazratbal, Srinagar, India

Background: High blood pressure is the number one contributing factor to the global burden of non-communicable disease. Though genetic and environmental factors play an important role in the causation of blood pressure but the main influencing factor and an important emerging public health problem in developing countries like India is obesity for which waist circumference is the most important anthropometry. This study was carried out with objective to find out prevalence of Hypertension and to assess its association with waist circumference. Methods: A cross-sectional community-based study was carried out among 400 subjects of age group >18 years during March 2017 to August 2017. Multi stage random sampling method was used and Hypertension was classified as per the 2017 guideline (updated JNC 7). Cut-off points used to define the obesity were waist circumference ≥ 80 cm for women and ≥ 90 cm for men. Data compilation and its analysis was done using Microsoft Excel and IBM SPSS Version 20.0. Results: Prevalence of hypertension among study subjects was found to be, 63.7% (Stage 1=43.0% and Stage 2=20.7%) with females and males having prevalence of 62.0% (Stage 1=39.9% and Stage 2=22.1%) and 66.9% (Stage 1=48.5% and Stage 2=18.4%) respectively. Fifty percent subjects were having waist circumference >cut off value and among them 71.3% were female and 11.3% were males (χ2=132.11, df=1, p<0.005) and the strength of association with female sex was strong (Cramer’s V=0.575). Conclusions: This study demonstrated that waist circumference has a potential as a means of identifying risk factor for hypertension.

High blood pressure is not only the main cause of ischemic heart disease and stroke but also the main risk factor for morbidity and mortality as a result of premature cardiovascular events. It is the number one contributing factor to the global burden of non-communicable disease. [1] It is estimated at the global level, that in people with hypertension, only 57% know their condition, 40.6% receive antihypertensive treatment and only 13.2% achieve the target of controlled blood pressure range. This gap is high in the middle and low income countries where 80% of the burden is attributed to cardiovascular diseases. Although not curable, high blood pressure can be prevented and treated to keep it within normal limits. To avoid premature deaths due to high blood pressure an adequate control is the only cost-effective expedient. It is estimated that, if half of these uncontrolled hypertensive patients are treated, including those treated sub optimally and untreated blood pressure values, about 10 million deaths can be prevented globally in 10 years due to cardiovascular events. [2] Though the genetic and environmental factors play important role in the causation of blood pressure such as the age, gender, body mass index, physical activity, diet and stress levels. However, the main influencing factor that leads to hypertension during adolescence and afterwards is obesity and metabolic syndrome. [3] Hypertension is no longer considered as a single diseases entity, but a part of bigger conglomerate of diseases like obesity, diabetes mellitus, renal diseases and other coexisting health issues involving lifestyle and genetics. [4]

The incidence of hypertension has doubled in the last five years in all social classes. As per WHO the prevalence of hypertension in India was about 36.0 in males and 34.2 in females in 2008. [5] Studies carried out in populations of India like Sikkim Himalayas, Andhra Pradesh, Rajasthan, and Orissa have documented the prevalence of hypertension from 15-42 per cent. [6] These studies have shown Hypertension is related to different anthropometric indicators like waist circumference (WC), body mass index (BMI), waist-hip ratio (WHR) and waist-to-height ratio (WHtR). Obesity is well-established as an important and independent risk factor for both the development and its complication. [7-9] The intimate relationship between hypertension and excess body fats is well documented, and population based studies have revealed adiposity as the one of the strongest known risk factors for hypertension in both genders of different ages and races. [10-14] Among different anthropometric indicators it has been seen that waist circumference is the only clinical index of obesity associated with an increased ambulatory and conventional Hypertension independent of other indices. [15] Indo-Asian population are at highest risk for cardiovascular disease globally. [16]

Understanding the role of these modifiable anthropometric determinants is the key to develop a clear and effective strategy for improving community health. The study was carried out with an objective to find the prevalence of hypertension and its association with waist circumference in adult population of district Srinagar, India where there is paucity of community based studies in this field.

The study undertaken was a cross sectional community based study, done among 400 subjects of age group >18 years in Medical block Hazratbal of Srinagar city, which is the field practice area of Department of Community Medicine, GMC Srinagar with an estimated population of 82,000 during period March 2017 to August 2017.

The sample size of 392 was calculated by adjusting with design effect (multiplied by 2) using WHO statistical formula and multi stage random sampling technique design. Informed/ verbal consent was taken prior to interview and anthropometric measurement.

A multi stage random sampling technique was used in order to give equal representation to all in the selected block and it was decided to select 100 subjects from each of four PHCs viz; Hazratbal, Nishat, Harwan and Tailbal that came out to be 400. Therefore a total of 400 subjects were included in study.

Persons aged 18 years and above of both male and female, willing to participate in the study.

• Subjects who were on long term medication for chronic diseases.

Blood pressure was recorded using a standard mercury sphygmomanometer which was standardized and checked regularly to minimize errors and two readings were taken with the subject in a relaxed sitting position. A standard stethoscope was used to record the blood pressure. Hypertension was classified as per the 2017 guideline, which is an update of the “Seventh Report of the Joint National Committee on Prevention, Detection, Evaluation and Treatment of High Blood Pressure” (JNC 7). [18] As per the guidelines the Blood pressure is categorized as normal, elevated, or stages 1 or 2 hypertension to prevent and treat high BP.

A non-elastic graduated measuring tape was used to measure waist circumference in standing position and after exhaling second normal breath. It was measured as the narrowest circumference of the trunk. However, the level of the last rib was taken into account when the position of the narrowest circumference could not be identified. [19,20] Cut-off points used to define the obesity were ≥ 80 cm for women & WC ≥ 90 cm for men. [21] Participants were categorized by age into young adults (aged 18-35 years), middle-aged adults (aged 36-55 years), and older adults (older than 55 years). [22]

The prevalence of hypertension in Young adults was (51.2%), Middle aged adults (77.2%) and Older adults (94.4%). The trend showed gradual increase in BP with age, minimum in 18-35 years age group and maximum in >55 years age group. The difference in age with respect to Hypertension was found statistically significant as shown in Table 1 and Figure 1. 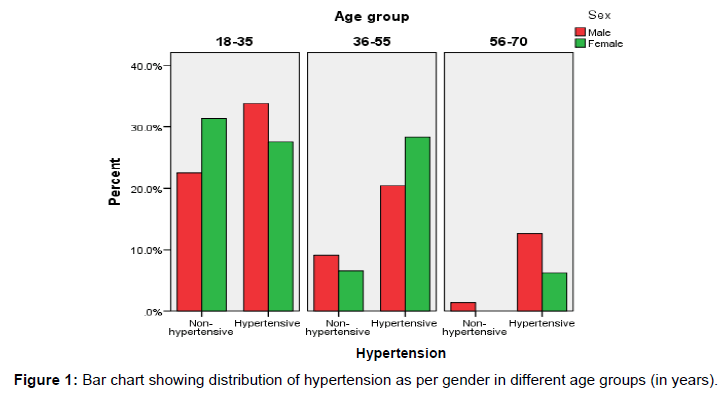 Figure 1: Bar chart showing distribution of hypertension as per gender in different age groups (in years).

Table 1: Distribution of hypertensive subjects as per age groups.

Table 2: Association of Hypertension with waist circumference (WC) as per gender.

The prevalence of hypertension in the this study which was classified as per the 2017 guideline, an update of the “Seventh Report of the Joint National Committee on Prevention, Detection, Evaluation and Treatment of High Blood Pressure” (JNC 7). [18] was 63.7% (Stage 1=43.0% and Stage 2=20.7%) with females having higher prevalence than males. Masoodi et al. conducted a study in Budgam district of Kashmir in 2016 and found the prevalence of hypertension was 34.1%. The main reason for the higher prevalence in current study seem to be the use of the Seventh Report of the Joint National Committee VII as per updated version 2017 classification where Stage 1 hypertensive (120-139/80-89 mmHg) falls in pre hypertensive range (Indian scenario in older version). [23-26] In this study 43.0% of the hypertensive patients fall in this group which were taken as pre hypertension in previous studies. Because of the updated guideline more people have been found to be diagnosed with Hypertension, but almost all of these newly categorized patients can be treated with lifestyle changes and may not need the medications. [27] The lifestyle modifications include the weight loss (one kg reduction in body weight for adults who are overweight which may reduce their blood pressure by 1 mmHg per kg reduction in body weight), healthy deit (consumption of diet rich in vegetables, fruits, whole grain and low fat dairy products), reduction of dietary Sodium intake (<1500 mg/day to 1000 mg/day in adults), increased dietary Potassium intake (3500-5000 mg/day) and above all physical activity ( 90-150 min./week). The prevalence of hypertension increased as the age increased and was found to be highest in older adults (age>55 years) about 94%. This finding was consistent with results of other studies like Vasan et al. and Masoodi ZA et al. who found significant association of hypertension with age. [23,28] The prevalence of obesity as defined by waist circumference was high (50%) in the study population, especially females (71.3%) putting them at increased risk for the hypertension as shown by the strong positive correlation in results. Similar results were obtained by Kokiwar et al. in Karimnagar, Telangana, India, Midha et al. in Lucknow, Uttar Pradesh, India. [29-34] Also among Mexican- American women and non-Hispanic white women nationwide (72% and 63%, respectively) (2011-2012 NHANES) and other studies the trend was same. [35-37] Typical climatic conditions of Kashmir valley and sedentary habits of the women who like to stay at home in this part of the world is the main reason for the high prevalence of obesity leading to the hypertension. Our findings of association between high waist circumference and increasing age with hypertension is consistent with reports of increasing risk of hypertension with age, providing support for continuing public health efforts in the early adulthood and afterwards. [38]

Limitations of the Study

The limitations of the study include the cross-sectional design with lower proportion of males as compared to the females, so caution must be taken on casualty assessment and gender specific analysis. However, the present study was not designed to determine the impact of obesity on Hypertension, but rather to identify the clinical index (waist circumference) associated with Hypertension. Single blood pressure readings are considered less accurate and a patient can only be clinically diagnosed as hypertensive if there is persistent hypertension on repeated visits. This limitation was overcome by taking mean of two readings which is considered acceptable for field studies. This study involved only waist circumference as obesity measures and other anthropometric indices like BMI, waist to hip ratio and waist to height ratio, were not used to keep the results concise, although waist circumference is the only clinical index of obesity associated with an increased ambulatory and conventional Hypertension independent of other indices as per different studies.

The results of the study demonstrated that waist circumference provides a valuable and simple method and has potential as a means of identifying obesity as a risk factor for hypertension. There is definitely a need for effective public health efforts to improve the prevention, detection, management, and control of obesity and thus hypertension. Intervention programs should be designed to reduce waist circumference through behaviour changes, lifestyle modification, including diet and exercise, which can be of public health significance in reducing the incidence of hypertension.

Authors would like to thank Dr. S.M. Salim Khan, Head of the Department of Community Medicine, Government Medical College Srinagar for his contribution and support to preparation and completion of the manuscript.

The authors declare no conflict of interest.

The study was approved by the Institutional Ethics Committee of Government Medical College Srinagar.