Background: Impaired sleep is reportedly common in chronic obstructive pulmonary disease (COPD) and its impact on Health-related quality of life has been documented. However, there is scarcity of data on sleep patterns and quality among patients with COPD in Nigeria. Methodology: Sixty clinically stable patients with COPD were evaluated. Information on demographics and presence of nocturnal symptoms were obtained. The Modified Medical Research Council (MMRC) dyspnea scale was used to assess severity of dyspnea. Subjective sleep quality was assessed using the Pittsburgh Sleep Quality Index (PSQI) and Daytime sleepiness was assessed using the Epworth sleepiness scale (ESS). Additionally, lung function was assessed by spirometry. In all the statistical tests, a p value of <0.05 was considered significant. Results: The mean age of the study population was 70 ± 8 years. Forty-nine patients (81.7%) had poor quality of sleep (PSQI >5), with sleep duration and habitual sleep efficiency sub-scores contributing the most to the total PSQI score. Three patients (5%) had excessive daytime sleepiness (ESS>9). Fortyfour (73.3%) patients reported disease related symptoms at night; cough (36.7%) was the most common nigh-time symptom. Severity of dyspnea and COPD according to Global Initiative for Obstructive Lung Disease (GOLD) stage were significantly associated with sleep quality (p=0.01 and 0.003 respectively). Conclusion: Results from this study suggest that overall sleep quality is poor in patients with COPD with many experiencing nighttime symptoms. However, excessive daytime sleepiness was not common among the study population.

COPD is a major cause of chronic morbidity and mortality throughout the world. It represents an important public health challenge that is both preventable and treatable. [1] According to a recent report, COPD is characterized by persistent airflow limitation that is usually progressive and is enhanced by chronic inflammatory response in the airways and lungs to noxious particles and gases. [1]

It is the fourth leading cause of death in the world. [1] At least 65 million people worldwide have severe COPD. [2] COPD is also an important cause of morbidity in the middle to elderly population in Nigeria with 10.5% having GOLD stage 2 and higher COPD. [3] COPD is associated with several respiratory and non-respiratory symptoms. Among the non-respiratory symptoms are weight losses, anxiety and sleep disturbances. [1] Sleep is a complex reversible state characterized by diminished responsiveness to external stimuli and a universal need of all higher life form, absence of which has serious physiological consequences. [4,5]

Sleep disturbances are particularly prevalent in COPD with associated poor outcomes. [6-8] Its aetiology is multifactorial and include demographic factors, pharmacotherapy, night-time diseasespecific symptoms, nocturnal hypoxemia, presence of comorbid sleep disorders, anxiety and depression as well as other medical conditions. [7] The nature of sleep problems among Nigerian patients with COPD has been poorly characterized, and studies on the clinical consequences of sleep disturbance in COPD are limited. [7]

This study is a cross sectional analytical study. Sixty subjects with diagnosis of COPD according to GOLD guidelines were consecutively recruited for the study. Inclusion Criteria are Patients with COPD diagnosis as defined by the Global initiative for chronic Obstructive Lung Disease (GOLD) guideline that are clinically stable. Shift workers and patients with medical conditions that may contribute to dyspnoea and exercise limitations such as corpulmonale and congestive heart failure were excluded. A modified version of the Medical Research Council (MRC) questionnaire was used to obtain information on respiratory symptoms of the patients. [8] Other parameters collected at the time of enrollment included age, sex, body mass index and most disturbing night-time symptoms in the previous month.

Sleep quality was assessed using the Pittsburgh sleep quality index (PSQI), a self-rating scale designed to measure perceived quality of sleep. It differentiates “poor” from “good” sleep by measuring seven domains: subjective sleep quality, sleep latency, sleep duration, sleep efficiency, sleep disturbances, use of sleep medication, and daytime dysfunction over the last month. The seven domains sub scores each of which ranging from 0 to 3 are tallied, yielding a “global” score that range from 0 to 21 with increasing score meaning worse sleep quality. A global score of >5 is accepted as differentiating good from poor sleepers with diagnostic sensitivity and specificity of 89.6% and 86.5% respectively. [9]

Pulmonary function test was performed according to the American thoracic society guideline (ATS) using a standardized spirometer. The following parameters were measured: Forced Expiratory Volume in 1second (FEV1), Forced Vital Capacity (FVC) and FEV1/FVC ratio. Subjects were divided into four groups on the basis of the severity of their airway obstruction using the GOLD criteria. [1]

Frequency tables and charts were used to describe the age distribution, gender, demographic and clinical characteristics of the study population. One-way ANOVA and Independent-Samples T-Test were used to compare mean values. In all the statistical tests, a p value of <0.05 was considered significant.

The mean age of the patients was 70 ± 8 years with the age range between 50 and 87 years. About a third of the patients gave a positive history of cigarette smoking (20, 33.3%) while 3 (5%) patients were current smokers. The mean pack years for current smokers are 11.5 ± 9.1 years while ex-smokers had a mean pack year of 8.9 ± 11.5 years. In the majority of the study subjects, the use of firewood is the source of cooking fuel (42; 70.0%). Other baseline characteristics and mean PSQI scores are shown in Table 1.

Sleep quality of the study population 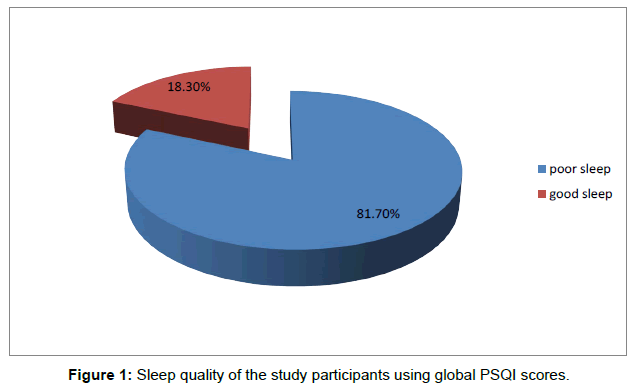 Sleep quality according to sleep domains is shown in Tables 2 and 3.

The mean duration of the first presenting respiratory symptoms in the study patients was 5.9 ± 5.7 years and ranges between 1 and 24 years (median of 4 years). Almost all the patients had cough (59, 98.1%) while less than a third had weight loss (19, 31.7%). Other symptoms included fatigue, palpitations and dyspepsia [Figure 2]. 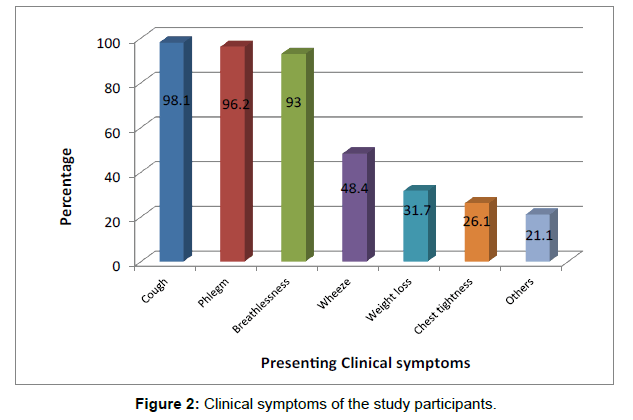 Forty-four (73.3%) patients had disease specific symptoms at night in the past one month. Proportion of patients with disease-specific nighttime symptoms in relation to its contribution to disturbed sleep are shown in Table 4.

Relationship between Sleep quality and severity of COPD

There were significant associations between GOLD stages of COPD and global PSQI score as well as for all sleep domains with the exception of sleep medication and habitual sleep efficiency domains [Table 5].

COPD negatively affects sleep and sleep impairment has been found to be a common complaint among patients with COPD contributing, to poor health status. [10] More than 80% of the patients in this study, rated their overall sleep quality as poor (PSQI >5) with a mean score of 9.93. High prevalence of impaired sleep in COPD is consistent with findings from other studies using the PSQI. Scharf et al. [11] reported 77% while Nunes et al. [12] reported a prevalence of 70%. Probably the highest prevalence of sleep impairment was in a study by Sajal De [13] in which 100% of the patients had poor sleep quality with a mean PSQI score of 11.

A reason for this observation may be due to presence of night-time symptoms. In our study, 11.7% and 15% of patients had disturbed sleep due to breathlessness and cough at night ≥ times per week respectively. A higher percentage of patients had nocturnal symptoms in a related study in which 48% had cough and 32% had dyspnea at night ≥3 times a week. [11] However, a common observation is that cough and dyspnea were important symptoms causing sleep disturbance in both studies. We found a similar pattern of night-time symptoms to that of PSQI with cough (36.7%) being the most disturbing nocturnal symptom followed by breathlessness (16.6%) based on patients’ responses. Other studies using symptom questionnaire also reported that nocturnal symptoms especially cough and breathlessness were associated with greater likelihood of disturbed sleep. [6,20] Patients with COPD may experience nocturnal exacerbation of symptoms because lying flat during sleep impairs pulmonary mechanics and gas exchange which may lead to frequent awakening. [21]

Using the MMRC dyspnea scale, we observed that sleep worsens with increasing severity of dyspnea. Nunes et al. [22] also found that dyspnea was the best predictor of total sleep time and sleep efficiency in a study. Dyspnea is a major symptom of COPD and patients with severe dyspnea are likely to be breathless at night leading to disturbed sleep. In addition, chronic dyspnea can lead to depressive episodes leading to impaired sleep and poor quality of life although this relationship was not assessed in our study. [23] Dyspnea is also a symptom of nocturnal oxygen desaturation, which is a major determinant of frequent arousals in patients with COPD. [24]

Moreover, nocturnal oxygen desaturation may account for the nocturnal awakenings in patients without significant night-time symptoms. [25] Almost half of the respondents reported waking up to use the bathroom ≥3 times per week which could be a reflection of fragmented sleep. [26]

There was a significant association between global PSQI score; sleep domains sub scores and GOLD stage of COPD with the exception of sleep medication and habitual sleep efficiency domain. These findings suggest that COPD severity is associated with disorders of initiating and maintaining sleep as well as daytime dysfunction. Similarly, a study by Nimrod et al. [15] found a significant correlation between global PSQI score and FEV1% predicted. Some studies however found no correlation between sleep quality and lung function. [11,27] Oxygen desaturation and severity of symptoms may explain the significant association between COPD, GOLD stage and sleep quality. [1]

This study showed that 31% of our patients have used sleep medications in the last one month with 8.3% using sleep medications more than 3 days per week, an observation similar to a study by Scharf et al. [11] that reported 11.1%. The use of sleep medications by these patients shed more light on the burden of sleep disturbances in COPD and attempts made to overcome this problem.

Poor sleep quality leads to various day time dysfunctions in COPD such as daytime excessive sleepiness, neuro-cognitive decline, fatigue and impaired HRQL. [28] In the current study, 2 patients (3.3%) had lack of enthusiasm to get things done three or more times per week. This lack of enthusiasm may be due to fatigue, a common symptom in patients with COPD. [28] Fatigue imposes limitations on motivation, concentration, and the ability to engage in everyday activities such as work and household chores. [29] The PSQI may however underestimate the prevalence of fatigue because reduced motivation is just one of the aspects of fatigue. [30] Other studies have also found an association between short sleep duration and daytime fatigue. [31] Fatigue may be related to mood states such as anxiety, irritability and depression which are causes of poor sleep in COPD. [29] In a study by Kapella, [32] dyspnea, depressed mood and sleep quality had significant association with subjective fatigue.

This study is subject to limitations. Due to the relatively small sample size, the statistical power of the study is reduced which decreases the chance of detecting significant differences when they truly exist. Recall bias is also a possible limitation, although the survey was administered by trained interviewers.

This study has demonstrated that patients with COPD have a high prevalence of impaired sleep quality. Presence of disease-specific night-time symptoms especially cough and dyspnea and severity of airway obstruction may contribute to impaired sleep. However, excessive daytime sleepiness is not a prominent symptom in the study population. Therefore, reducing disease- specific COPD symptoms and optimizing treatment may improve quality of sleep in COPD patients.

Approval of the Ethics and Research Committee of the Obafemi Awolowo University Teaching Hospitals Complex (OAUHC) was sought and obtained before the commencement of the study. Informed consent of the individuals for the study was obtained.