Tuberculosis is one of the oldest scorches of mankind that has not left this world even today. The disease is more common in the developing countries. Oral tuberculosis has been considered in 0.1-5% of all tuberculous infections. Mostly, the oral tuberculous lesions are secondary to pulmonary tuberculosis, but rarely primary lesions may occur. Primary lesions occur due to direct inoculation of the microorganism into the oral mucosa and mainly seen in the young individuals. Tongue is the most common oral site involved. Of all the sites involved, labial involvement is extremely rare. This case report intends to throw light on one such unique case, where a young male patient presented with a primary tubercular lesion of the lip. The lesion resolved immediately after anti tubercular therapy.

With the advent of the latest diagnostic aids and treatment modalities, medical science has undergone a paradigm shift in the recent past. However, Tuberculosis (TB) is still counted as one of the most life-threatening infectious diseases, resulting in high mortality in adults.[1] With an incidence of 139/100,000, active Mycobacterium tuberculosis infections globally and it is estimated that two billion people have been in contact with the TB bacillus. About 95% of the individuals exposed to M. tuberculosis remain clinically asymptomatic while 5% develop disease. A significant proportion of patients (15-25%) exist in whom the active TB infection is manifested in an extra pulmonary site.[1,2] Oral TB has been considered to account for 0.1-5% of all tuberculous infections. The clinical presentation of oral TB may take many forms. However, owing to the unusual occurrence of oral TB, they are frequently overlooked in the differential diagnosis of oral lesions. Now-a-days, oral manifestations of TB are re-appearing alongside many forgotten extra pulmonary infections as a consequence of the outbreak and emergence of drug-resistant TB and of the emergence of acquired immune-deficiency syndrome, where oral TB is found to account for up to 1.33% of human immunodeficiency virus (HIV)-associated opportunistic infections.[3] The main aim of this report is to present a rare case of 24 year adult presenting with a case of the primary tubercular lesion of the lip.

A 24-year-old male presented with a 15 days history of persistent swelling of upper lip that ulcerated 2 days ago. He denied any history of trauma, fever, cough, weight loss, and drug or tobacco usage and his past medical and dental history was non-contributory. The patient was thin built with normal vital signs. There was no lymphadenopathy. A diffuse, non-tender swelling of lower lip with mild eversion of the lip was present [Figure 1]. A reddish pink granular lesion involving the vermillion border, labial mucosa, floor of the mouth, and the mandibular anterior gingiva was seen. The lesion had patchy areas of brown crustation, bleeding and purulent discharge [Figure 2]. A provisional diagnosis of Chelitis granulomatosis was made with a differential diagnosis of Baelz disease, tuberculous granulomatosis, sarcoidosis, a deep mycosis, primary syphilis, leishmaniasis, Squamous cell carcinoma, and non-Hodgkin’s lymphoma. Plain chest radiograph and complete hemogram were within normal range. Serologies for syphilis and Leishmania, Mantoux test, and Enzyme-linked immunosorbent assay (ELISA) for HIV gave a negative result. An incisional biopsy from the lesion was undertaken that revealed numerous necrotizing epitheloid granulomas with Langhans type giant cells. Ziehl-Neelsen staining showed multiple rods like acid fast bacilli, confirming the diagnosis of primary labial tuberculosis [Figures 3 and 4]. The patient was started on anti-Koch’s therapy in consultation with the physician with culture report awaited. Culture report obtained after 6 weeks confirmed mycobacterium tuberculous infection. Anti-Koch’s therapy administered in this case consisted of four drug regimen, that is, rifampicin, isoniazide, ethambutol, and pyrazinamide for 6 months. The patient was regularly followed-up for next 6 months. The lesions regressed significantly within 15 days of beginning of the therapy and healed completely within 2 months [Figure 5]. 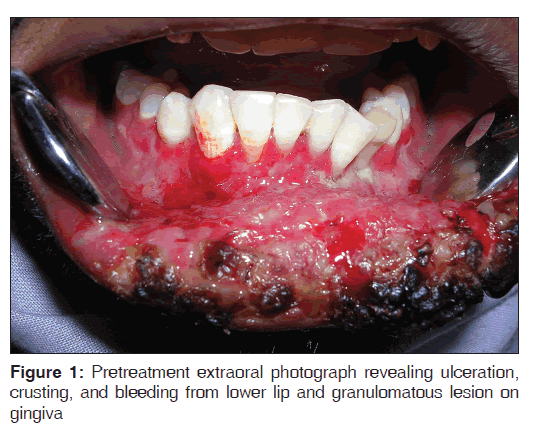 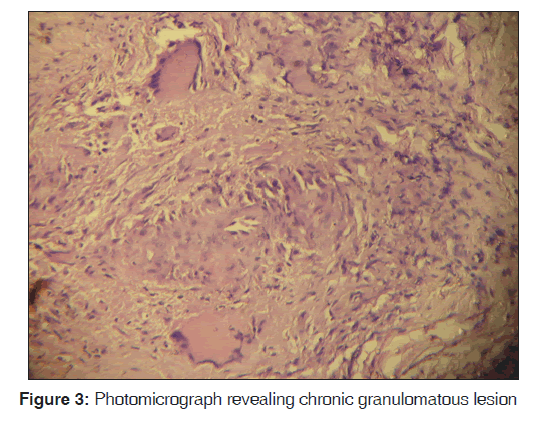 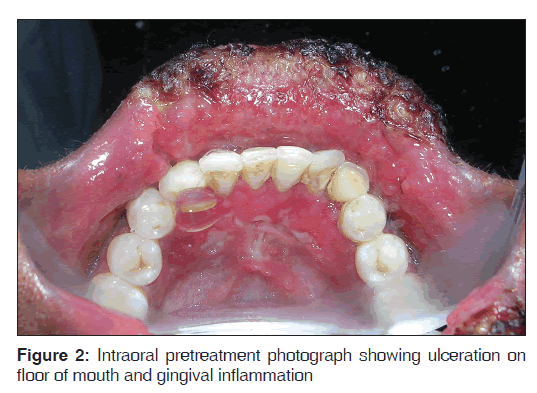 Oral tuberculosis is a rarity with an incidence of 0.1-5% of all extra pulmonary cases. Tuberculous lesions of the mouth may be either primary or secondary to pulmonary tuberculosis with secondary lesions being more common. This may be attributable to the intact squamous epithelium of oral cavity and anti-mycobacterial factors in saliva. According to Mignogna et al., primary form of tuberculous oral lesions is more commonly found in children and adolescents than in adults, usually affecting the gingiva, and mucobuccal folds.[4] The intact oral mucous membrane presents a natural resistance to mycobacterium invasion. Besides this, the cleansing action of saliva, the presence of salivary enzymes, tissue antibodies, oral saprophytes, and the thickness of the protective epithelial covering also play a significant role in protecting the oral tissues. Any break or loss of this natural barrier, which may be result of trauma, inflammatory conditions, tooth extraction or poor oral hygiene, may provide a route of entry for the mycobacterium. However, direct inoculation in Primary oral tuberculosis may occur in case of ulcers, fissures or swelling of mucosa. Tongue, gingivae and palate are the most common sites for these oral lesions.[5] However, in the present case adult male of 24 years was affected with a lesion predominantly on the lower lip. TB of lip is an extremely rare condition with not more than ten reported cases as in this case the site for primary lesion was on the lower lip. Clinically, oral tuberculosis may present as a stellate ulcer with undermined edges and a granulating floor, erythematous patches, nodules, fissures, granulomas, salivary gland involvement, tuberculous lymphadenitis or tuberculous osteomyelitis of the jaws.[6,7] The lesions may be single or multiple and painful or painless.[4,6] This case presented with the swelling and ulceration of lower lip, granular lesions involving the vermillion border, labial mucosa, floor of the mouth and the mandibular anterior gingiva. Although a forgotten diagnosis, tuberculosis must be included in the list of differential diagnosis of all oral ulcerative and granulomatous lesions. Eng et al. demonstrated radiographic evidence of pulmonary tuberculosis in 93.3% of the patients with oral tuberculosis.[8] Radiographic features of primary oral TB may manifest as osteomyelitis in alveolar or angle region with mandible more commonly affected than maxilla, mandibular resorption due to enlarged cervical lymph nodes or condylar head resorption.[9] In this case, no radiographic findings exhibiting the pulmonary involvement were evident in the chest radiograph of the patient. Von Arx and Husain[6] described the histopathological features of TB as granulomas with sarcoid-like and numerous giant cells.[10] In the current report, several acid-fast bacilli were identified with a Ziehl-Neelsen stain situated within the granulomas and confirmed that the granulomatous inflammation on histopathology was consistent with tuberculous granulomatous infection.

In spite of numerous steps taken by the public health providers and repeated attempts to eradicate the disease, Tuberculosis still remains a major dreaded disease world-wide. Although the oral manifestations are rare, these must be included in the differential diagnosis of all chronic ulcerative lesions and swellings of the orofacial region.