Background: Leptin, an adipocyteâÂÂderived hormone encoded by ‘ob’ gene, serves as a link relaying metabolic signals to the neuronal networks in the brain to modulate hypothalamoâÂÂpituitaryâÂÂovarian axis. Circulating leptin correlates strongly with obesity, which is frequently associated with polycystic ovarian syndrome (PCOS), a major form of dysovulatory infertility in women, characterized by endocrine abnormalities such as hyperandrogenism and inappropriate LH secretion. PCOS is also often associated with insulin resistance and hyperinsulinemia, features that are linked to leptin and its receptors. However, the relationship between leptin and gonadotropins, androgens, and insulin in PCOS is still controversial. Aim: Present investigation attempts to evaluate the interrelationship between serum leptin level with body mass index, insulin and with circulating testosterone in PCOS women. Subjects and Methods: Women diagnosed with either tubal block/male factor infertility (Control; n = 18) and with PCOS (n = 16), enrolled for in vitro fertilization and embryo transfer (IVFâÂÂET), were recruited for this study. All were reviewed for body mass index (BMI), endocrine milieu (including pituitary gonadotropins, TSH, prolactin, gonadal steroids, and insulin) and for circulating serum leptin. Interpretation of data was done using PRISM Statistical Software Package (PRISM Version [email protected]âÂÂ2005; GraphPad Software Inc). Results: Positive correlation was observed between serum leptin, BMI, and insulin in both the groups. Mean BMI, LH, and LH: FSH ratios were found elevated in the PCOS population. PCOS women also had significantly elevated androgens and fasting levels of insulin. Conclusion: Hyperleptinemia in PCOS women appears to be due to the positive correlation between serum leptin, BMI, and insulin.

A critical body mass of adipose tissue is essential for the normal development of female reproductive functions.[1] Reproductive anomalies in young pre-menopausal women seem to occur as a consequence of the linear decline in adiposity. Obesity, on the other hand, has been shown to produce derangement of female reproductive functions and infertility.[2] But, the mechanistic link between body mass and reproductive functions is not yet clearly elucidated.[3] Leptin, an adipocyte-derived hormone encoded by ‘ob’ gene, has been proposed as the peripheral signal indicating the adequacy of nutritional status for reproductive functions.[4] But contradictory reports are available pertaining to how leptin modulates or is being modulated by pituitary gonadotropins or sex steroids. Polycystic ovarian syndrome (PCOS), a major form of dysovulatory infertility in women, is often associated with obesity and insulin resistance, both of which are features that are linked to leptin and its receptors. Serum level of leptin is higher in obese women. Obesity modifies insulin sensitivity and gonadotropin dynamics and is associated with disorders of ovulation. But, the relationship between leptin and insulin sensitivity, sex steroids, and insulin concentration in derangement of ovarian function still remain elusive and controversial.[5] It has been proposed that in part by increased intra-follicular levels of leptin, obesity directly affects ovarian functions in PCOS and may induce relative resistance to gonadotropins.[6] Taking into consideration the known association between leptin, obesity, and insulin action, it can be assumed that leptin might have a role in PCOS. Women with PCOS are characterized by hyperandrogenemia, increased leutinizing hormone (LH) concentrations, and high incidence of hyperinsulinemia/insulin resistance and obesity. Thus, PCOS patients may serve as a reliable model to assess the relationship of hyperinsulinemia and androgen excess with leptin concentrations beyond the association of leptin and obesity per se. Present study is, therefore, centered on the objective of evaluating the inter-relationship between serum leptin level with body mass index, insulin and with circulating testosterone in PCOS women.

34 Indian women aged between 24-36 years who were otherwise healthy but complained of primary or secondary infertility lasting for 2-12 years and enrolled for IVF-ET were recruited in this study. The patients and their partners were thoroughly investigated (indices of ovulation, transvaginal ultrasonography, laparoscopy with assessment of tubal patency, semen analysis, and endocrine milieu) for the cause of infertility. All of them were euthyroid and normoprolactinemic. None of them had detectable pituitary or hypothalamic dysfunction. Moreover, none had received any drugs known to interfere with hormonal concentrations for at least 3 months before the study.

They were primarily grouped in to following categories:

i. Patients having infertility due to tubal block with no other pelvic abnormality and male factor infertility (includes healthy women with regular menstrual cycles of 26-30 days, normal-sized ovary and no sign of hyperandrogenism).

ii. PCOS. Diagnosis of PCOS was done according to the Androgen Excess and PCOS Society criteria for the polycystic ovary syndrome.[7]

Women diagnosed with tubal block and male factor infertility were recruited as ‘control’ (n = 18) group while women with PCOS (n = 16) served as the study group.

Depending on BMI, both the control and the PCOS women were further categorized under obese (BMI >25) and non-obese (BMI ≤ 25) sub-groups. Informed consent was obtained from all patients prior to inclusion in the study. This study was conducted with the approval of the research ethics board of the institute.

Fasting blood samples for the assessment of hormone profiles were collected either from spontaneous (in case of control patients) or from withdrawal (in case of PCOS patients by contraceptive challenge) cycles on 2nd day of menstruation. For PCOS patients, fasting blood samples were also obtained followed by a 75 gm, 2-hours oral glucose tolerance test (OGTT). All samples were obtained between 8:00 and 10:00. Sera were procured after centrifugation and stored at -40°C for the assay of hormones and for leptin. 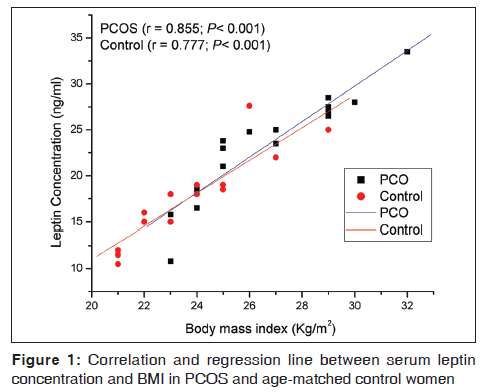 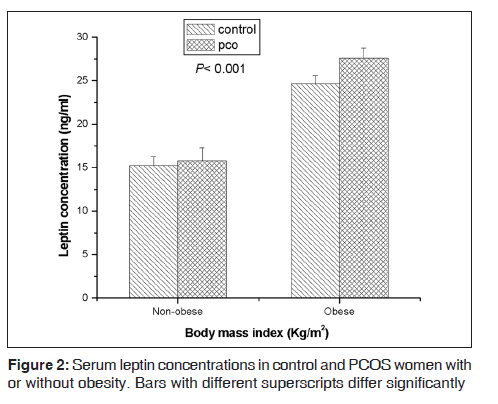 Figure 2: Serum leptin concentrations in control and PCOS women with or without obesity. Bars with different superscripts differ significantly 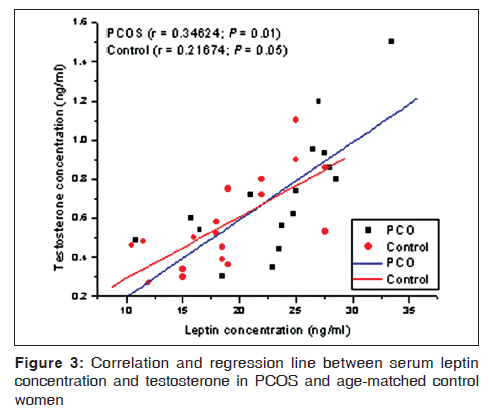 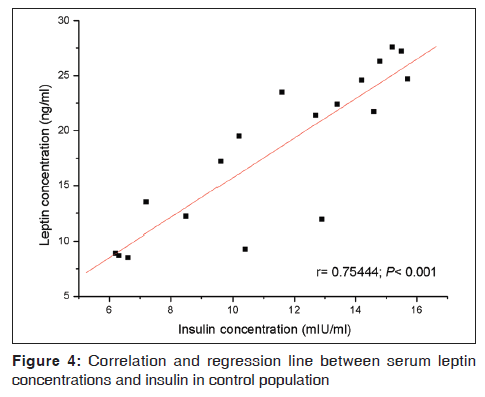 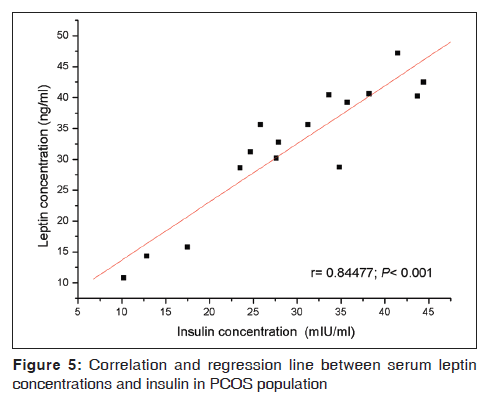 Table 1: Clinical and endocrine characteristics of control and PCOS women

Ovary is an ever-changing tissue and dynamic multicompartmental organ, which is under the chief regulatory control of hypothalamic, pituitary principles. The hypothalamic-pituitary control over ovarian functions, however, is precisely governed by a plethora of external factors and internal peripheral principles including many of ovarian origin. Leptin has emerged as peripheral signal and a potential regulator of many reproductive functions including gametogenic and steroidogenic potential of ovary. It is considered as a possible link between nutrition and reproduction.[10] Reproductive potential in women undergoes adverse alteration following severe changes in nutritional status and energy availability in both directions. These adaptive changes are reversible when nutritional status is normalized.[11,12] Leptin is important in regulating energy homeostasis, and by this virtue impacts the reproductive systems in diverse ways.[13] Leptin concentration shows fluctuations during menstrual cycle,[14] which indicates that in adult women, possibly a feedback interaction exists between leptin and the hypothalamo-pituitary-ovarian (HPO) axis. Moreover, leptin receptor and mRNA have been identified in the HPO axis.[15,16] Leptin mRNA and protein production have also been documented in granulosa cells, oocytes, and early cleavage stage embryos.[17] Expression of leptin receptors in granulosa cells, which synergies with glucocorticoids to promote steroidogenesis, indicates that leptin exerts direct regulatory action in ovarian folliculogenesis.[18] Furthermore, leptin has been shown to regulate expression of mRNAs for side chain cleavage enzyme and 17a-hydroxylase [19] and to modulate LH-stimulated estradiol production [20] in the ovary. Serum leptin is found to be keenly interrelated with estrogens, progesterone, androgens, and insulin. But, their role in the regulation of circulating leptin levels is still obscure. Though leptin is widely present in reproductive tissues, its relationship to reproductive hormones is still poorly understood. Controversial results have been reported during hormone replacement therapy, oral contraceptive intake, and ovulatory disorders.[21,22] Polycystic ovarian syndrome, the common dysovulatory infertility, is characterized by chronic anovulation, hyperandrogenemia, insulin resistance, and a high incidence of obesity;[7] features which are often linked to leptin and its receptor. These facts thus make PCOS women a useful tool to assess the inter-regulatory phenomena between leptin and ovarian function. The results of the present study confirm that a positive correlation exists between serum leptin and BMI. Unlike the results of Rouru, et al.[23] and Laughlin, et al.[24] that leptin levels were similar in both PCOS patients and control subjects, the major finding of the present investigation is that, irrespective of BMI or insulin resistance, PCOS population has higher leptin levels. This observation is quite legitimate, because leptin is predominantly synthesized by adipocytes, and higher BMI is distributed with high frequency in the PCOS group than in control women. The difference in the leptin levels reached greater magnitude of significance when PCOS women were categorized under obese (BMI > 25) and non-obese (BMI ≤ 25) sub-groups. Moreover, the most noteworthy of all is to observe that even after normalization of most of the known confounding factors, the PCOS women tended to have increased serum levels of leptin. Especially, a subset of PCOS population had significantly elevated leptin level even after the adjustment of BMI. This finding of hyperleptinemia in PCOS appears to be a masking effect of hyperinsulinemia after transformation of data to achieve normality to account for the distribution of insulin resistance (IR) between the PCOS and the control groups. Leptin levels were found statistically comparable between the two groups having comparable magnitude of BMI and IR. Within the PCOS group, normalization of data in respect of obesity and IR, however, showed positive influence of insulin and obesity individually on fasting leptin levels, independent of adiposity and IR, respectively. Insulin has been shown to increase leptin mRNA in adipocytes, suggesting its possible role in stimulating leptin secretion.[25] It may be that the elevated leptin in hyperinsulinemic PCOS women is a secondary consequence of insulin-stimulated synthesis of leptin. Leptin on the other hand, inhibits insulin-mediated promotion of gonadotropin-stimulated steroidogenesis. There are reports that leptin decreases glucose-mediated insulin secretion through its receptors in the hypothalamus and also attenuates its action at the cellular level.[26] The cellular signaling interactions among gonadotropins, insulin, and leptin thus appear very complex. Furthermore, in this investigation, a high proportion of women with PCOS were found hyperandrogenic. The mean baseline serum testosterone level in PCOS patients was found significantly higher compared to control. But, when serum testosterone was analyzed as a function of serum leptin, no significant correlation could be found between testosterone and leptin in either of the groups. High leptin levels, although was theoretically likely to inhibit ovarian steroidogenesis in PCOS women, elevated leptin levels are associated with elevated testosterone levels. Therefore, there must be some as yet undefined mechanism underlying insulin-mediated ovarian androgen production.

Taken together the present observations made in this study propose that regulation of leptin’s synthesis and its action on female reproductive system are governed by a plethora of controlling factors. Small size of the study population limits the statistical power to judge precise correlation; however, elevated serum leptin in polycystic ovarian women appears to be due to the positive correlation between leptin and BMI and insulin levels. The observations presented herein should be viewed as a prelude to what future holds.