Background: Hansen’s disease is a chronic infectious granulomatous disease caused by Mycobacterium leprae. In leprosy the final immune response depends on predominant effector pathway M. leprae bacilli are presented by antigen presenting cells to CD4+T cells with subsequent release of Interleukin -12 leading to TH1 response. Release of interferon gamma (IF-γ) promotes further TH1 response development. IF-γ along with tumor necrosis factor and IL-2 leads to recruitment of monocytes and their transformation into epithelioid cells and granuloma formation. Aims: Our aim of the study was to analyse serum levels of interleukin-1β (IL-1β) and interferon-γ in newly diagnosed untreated patients of leprosy and to co relate their levels with clinico-histopathological profile. Methods: (including settings and design and statistical analysis used). The study was an analytical cross-sectional study. Fifty newly diagnosed leprosy patients were included in the study. They are categorized into paucibacillary (30) and multibacillary (20) groups. Serum cytokines assay for IL-1β and IFN-γ were performed by ELISA and were compared between the two groups. Mean serum cytokine levels of IL-1β and IFN-γ in both paucibacillary and multibacillary groups were calculated. Significance of mean difference between IL-1β and IFN-γ was assessed using Mann Whitney U test between the two groups. Results: Significant high serum levels of IFN-γ were seen in paucibacillary group as compared to multibacillary group. Although serum levels of IL-1β were raised in multibacillary group compared to paucibacillary group. The mean difference was not statistically significant. Limitations: The limitation of present study is low sample size. Conclusions: Serum interleukin levels (IL-1β and IFN-γ) are different among the paucibacillary and multibacillary cases. The fact is useful not only to understand the disease pathogenesis but also in sub categorization of Hansen’s disease patients.

Hansen’s disease is a chronic infectious granulomatous disease caused by Mycobacteria leprae, which is an obligate intracellular pathogen. [1] Prevalence of leprosy in India by the end of 2016 was 0.66/10,000 population. [2] Based on degree and type of immune response, leprosy is classified into tuberculoid (TT), borderline tuberculoid (BT), borderline borderline (BB), borderline lepromatous (BL) and lepromatous leprosy (LL). [3] There will be downgrading of immunity towards lepromatous pole, and upgrading towards the tuberculoid pole may occur within central groups (BT, BB, BL) but the two polar groups (TT, LL) are stable. [4,5]

Cytokines are glycoproteins with low molecular weight produced by immune as well as non-immune cells which acts as molecular signals for communication between cells in immune system. [6] In leprosy the final immune response depends on predominant effector pathway M. leprae bacilli are presented by antigen presenting cells (APC- Dendritic cells and Macrophages) to CD4+ T cells with subsequent release of Interleukin -12 (IL-12) leading to TH1 response. [7]

Release of interferon gamma (IF-γ) promotes further TH1 response development. IF-γ along with tumor necrosis factor (TNF) and IL-2 leads to recruitment of monocytes and their transformation into epithelioid cells and granuloma formation. [7] Onset of lepromatous leprosy (LL) correlates with cytokines produced by TH2 cells on the background of patient’s poor CMI i.e., increased IL-4, IL-5, IL-10 and deficient IL-2 and IF-γ. On the other hand, tuberculoid leprosy (TT) associated with a TH1 response i.e., increased IL-2, IL-12, IL- 18, IFN-γ, granulocyte monocyte colony stimulating factor (GM-CSF) and TNFα. It also has been showed that in leprosy patients IFN-γ and TNF –α are immunoprotective whereas IL- 10, IL-4, IL-5 and IL-1β are immunosuppressive. [7]

The strong immune responses result in recruitment of Langerhans cells to the site skin lesions in tuberculoid leprosy. On the other hand, the TH2 helper cells counteract by inhibiting activity of TH1 helper cells and downregulating the activation of Langerhans cells in Lepromatous leprosy. [8] Very few studies have correlated levels of serum cytokines with clinical and histopathological findings. [9]

A total of 50 newly diagnosed cases of leprosy attending the dermatology outpatient department (OPD) were included in this study. Patients already undergoing treatment or having comorbid conditions were excluded. Samples were collected before the start of drug treatment. Consent was taken from the patient, followed by detailed clinical history and physical examination. Diagnosis of leprosy was done clinicopathologically and for patients towards the lepromatous pole Wade-Fite staining was done. Cases were classified into two broad categories based on bacillary index as multibacillary and paucibacillary groups [10] The cases comprised of 20 multibacillary [BB, BL and LL, Figure 1] and 30 paucibacillary [BT and TT, Figure 2]. 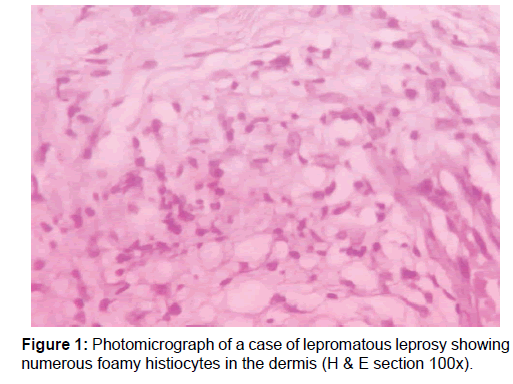 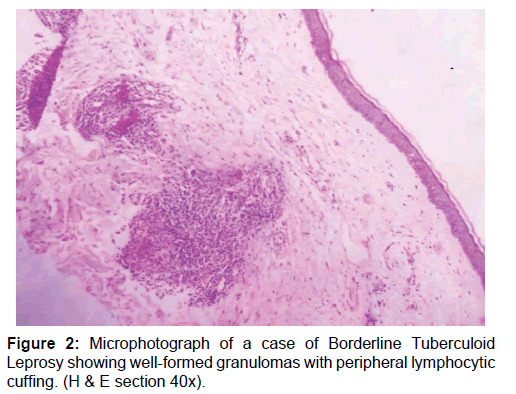 Skin biopsy was taken in the minor O.T and then tissue is processed and stained with H&E as well as Wade Fite’s stain. Based on histopathology, they were classified into BT, TT, BB, BL and LL. Serum was collected from the patient for the measurement of cytokines (IL-1β and IFN-γ) through ELISA (Boster, USA). Serum sample collection was done in the skin OPD at the time of skin biopsy. Sample was collected in plain vacutainer and left undisturbed in water bath at 37°C for 1⁄2 hr. Serum was separated by centrifugation of vacutainer for 5 min at 4000 rpm. Serum was stored at – 40°C in deep freezer and thawed before analysis.

Data of age was classified. Mean and standard deviation was calculated for numerical data. Significance of mean difference of age in between the two groups was assessed using Student - t test. Categorical data between two different categories was compared using Pearson chisquare test. Serum cytokine levels of IL-1β and IFN-γ were measured in pg/ml in individual samples and used for analysis. Mann-Whitney U test was used to compare numerical results from ELISA between two different categories. P-value below 0.05 was regarded as significant.

Majority of the cases (38%) were in the age group of 21-30 years [Figure 3]. Among paucibacillary patients mean age was 29.23 years with a standard deviation of 13.48 and for multibacillary patients mean age was 36.55 years with standard deviation of 11.26 with difference between mean age of two groups being statistically insignificant (p-value=0.051, Student t- test) [Table 1]. 60.00% cases were males with M-F ratio of 1.5: 1 [Table 2] and difference in M-F percentage between multibacillary and paucibacillary group was not statistically significant (p-value=0.239, Pearson chi-square test). 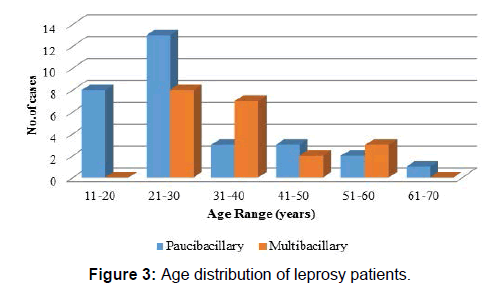 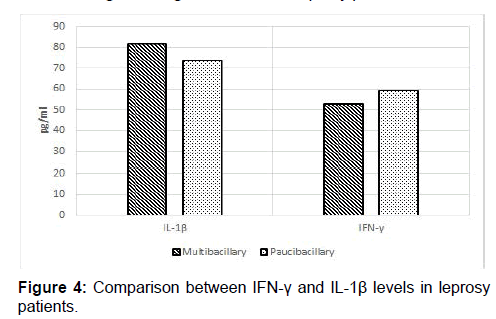 Figure 4: Comparison between IFN-γ and IL-1β levels in leprosy patients.

A total of 50 newly diagnosed cases of leprosy were included in the study and were classified as multibacillary and paucibacillary groups using the classification proposed by WHO. [10]

Age of the patients included in the present study ranged from 12 to 62 years. Majority of the patients (38%) were in the age group of 21 to 30 years of age, youngest being 12 years and eldest being 62 years of age. Mean age of paucibacillary patients was 29.23 years and for multibacillary patients was 36.55 years. Study done by Jyothi et al. [11] of 58 untreated cases of leprosy were included in the study in which 23 cases were paucibacillary (40%) and a mean age of 26.09 years. Also included in the same study 35 cases of multibacillary group (60%) with a mean age of 37.94 years. In majority of the previous most patients were in the age group of 21-40 years and this may be due to increased risk of exposure among this age group as most of them were leprosy workers. [12-15] In our study the mean age of multibacillary patients is higher than the paucibacillary group. Similar findings were noted by Nobre et al. [16] in Brazil where both the general new case detection rate and the detection of multibacillary cases were higher among 60–79-year-old. The percentage of new cases which were classified as multibacillary progressively increased and reached 67.7% in 60 or more years of age group (180/266). These changes can be attributed to the longer incubation period of multibacillary leprosy that usually recurs in people who were previously infected. [17-19] Recent studies in Mexico and in Korea during successive periods of decline in transmission showed that during the periods of greatest transmission, peak detection already occurred among the elderly. [20,21]

Immunity has a major role in the pathogenesis of leprosy. At the tuberculoid pole, TH1 cells are activated leading to a strong CMI response to M. leprae (IL-2, IFN-ϒ, TNF-α and IL-12 are the predominantly expressed cytokines). [23-30] At the lepromatous pole, TH2 cells are activated which inhibits TH1 response leading to a defective CMI response to M. leprae. IL-10, 1L-1β, IL-4, IL-5 are the key cytokines of TH2 response. [16-19]

In the present study, the mean value of IFN-γ is 59.39 pg/ml in 30 patients of paucibacillary group and with standard deviation of 204.74, and in 20 patients of multibacillary group it was 53.00 pg/ml with a standard deviation of 194.54. The difference in IFN-γ was statistically significant (P-value=0.044). Present study showed that paucibacillary leprosy patients coincides with a rise of TH1 cytokines, i.e., IFN-γ.

Parida et al. [32] analyzed serum TNF-α and IL-1β levels in 64 patients spread over the spectrum of leprosy. Elevated levels of TNF (15 to 4500 pg/ml) were detected in lepromatous leprosy cases and low levels (15 to 160 pg/ml) were detected in tuberculoid forms of leprosy. IL-1β levels were found to be significantly higher in Lepromatous Leprosy cases in comparison to other groups or normal controls.

The results of this study may be limited by the small sample size, however, a larger prospective study can be done to identify the role of IL-1β and IFN-γ in pathogenesis of leprosy and categorization of leprosy patients.

In conclusion, serum interleukin levels (IL-1β and IFN-γ) are different among the paucibacillary and multibacillary cases. The fact is useful not only to understand the disease pathogenesis but also in sub categorization of Hansen’s disease patients.