Sexual Activity and Urological Morbidities Among Nigerian Menopausal Women: Findings from a Community Based Survey

Background: Menopause represents the end of women reproductive career and it is at this time they begin to manifest morbidities such as urinary incontinence. Aim: To document proximate determinants of sexual activity and urological morbidities of menopausal women. Subjects and Methods: This was a community survey conducted among 254 menopausal women Mokola in Ibadan, Nigeria in 2008. Respondents were selected using cluster sampling technique. Interviewer administered questionnaires were used to obtain information on their characteristics, pattern of urological and sexual activities. Descriptive, bivariate and multivariable tests were performed with Statistical Package for the Social Sciences 15.0 (Chicago, IL USA) and statistical significance was set at P value less than 0.05. Results: The mean age of subjects was 60.3 (standard deviation = 10.2 years). About 33.5% (85/254) was still sexually active. About 68% (173/254) reported a reduction in sexual frequency since menopause while 31.5% (80/254) reported no change. The mean selfârated sexual performance score was 4.3 based on a numerical scale where 10 is the maximum obtainable. Significant predictors of reduction in sexual activity were age at menopause and education. Those between 45 and 49 years were less likely than those at 55 years or more (odds ratio [OR] = 0.21; 95% confidence interval OR = 0.05â0.87) while women with at least secondary education were thrice less likely than those with none to report a reduction in sexual activity after menopause. Less than a tenth reported urinary incontinence as a complaint. Urge incontinence was the most commonly reported followed by dysuria and stress incontinence. Less than a quarter of them had requested for a form of treatment. Conclusion: Sexual performance of Nigerian menopausal women is associated with age at menopause and education. Nonâfistulous urinary incontinence is now being mentioned as a complaint contrary to the widely held view that it is part of the aging process. Therefore, awareness creation on management opportunities should be shared with them.

Menopause signals the end of reproductive activity of women.[1,2] The way this inevitable status is perceived differs in many settings and it is usually influenced by sociocultural factors, quality of information at their disposal as well as economic factors.[3] Studies have shown a wide range of opinion of women on the interpretation of menopause, associated morbidities and possible intervention to cope with the state.[4,5] Sexual activity during menopause has been reported with conflicting results.[6,7] Some have reported increased sexual activity because there was no reason to fear for unplanned pregnancy while in another setting, it is regarded as taboo.

Majority of morbidities that are commonly associated with menopause is a reflection of hormonal insufficiency and example of such include urinary incontinence, osteoporosis, heart diseases and bone fracture among others.[8] Urinary incontinence is one of the measures of quality-of-life among the geriatrics. In women, it may manifest as stress, detrusor instability or mixed incontinence. Reports have shown that the prevalence increase with aging.

Community surveys on menopause and associated morbidities are scarce in Nigeria especially on urinary incontinence complaints. Elsewhere, sexual performance in the elderly is been reported to be low and the rating approach used appears vague thus making it difficult to compare results across different study sites.[9,10] In addition, urinary incontinence as a specific morbidity is sparingly documented among menopausal women in Nigeria. Therefore, lack of representative data on these morbidities that could influence appropriate policies and programming has constituted a great challenge in addressing the reproductive health needs of these women.

The objective of this study is to describe proximate determinants of sexual activity and urological morbidities of menopausal women within the community.

This is the descriptive study conducted among menopausal women in Ibadan Metropolis. A cluster sampling method was used to select 254 postmenopausal women in Mokola, an urban community in Ibadan, Southwest Nigeria. From a list of enumeration areas (EAs), five were randomly selected by balloting. Considerations were given to the proportion of women aged 45 years and above in the population in selecting the EAs. The households were then enumerated and using the systematic random sampling households was visited. All women aged 35 years and above in each household were interviewed and asked if they had attained menopause. Those who had attained menopause were then interviewed after consent was obtained. Ethical clearance was obtained from Oyo state Ethical Committee.

Data was collected using a pretested questionnaire with sections on socio-demographic characteristics, pregnancy and birth history, urinary symptoms and sexual activity. A numerical rating scale of 0-10 was used to assess the sexual performance in reference to their premenopausal state. Data was entered and analyzed using Statistical Package for Social Science version 15.0 (Chicago, IL, USA). Summary statistics such as means and proportions were reported. The Chi-square test was used for significance of the association between categorical variables and logistic regression for multivariable analysis. Level of statistical significance was set at 5.0%.

The mean and median ages at menopause were 49.3 (5.6) and 46-52 years respectively. Nearly, 10% (95% confidence interval [CI] = 8.1-11.9) of respondents reported symptoms of urinary incontinence. Of this, urge incontinence was most commonly reported 10 (40.0%) followed by stress incontinence 7 (28.0%), dysuria 5 (20.0%), two had total urinary incontinence alone and one with combined fecal incontinence [Figure 1]. Less than a quarter of those with symptoms requested any form of treatment. 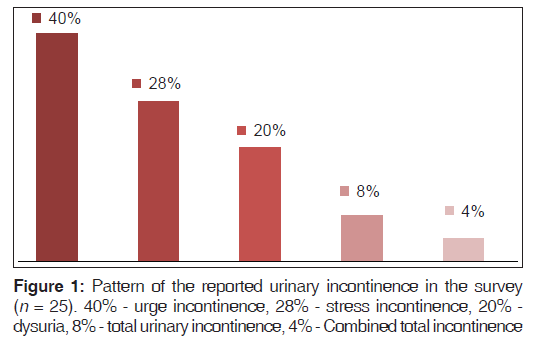 The mean self-rated sexual performance score was 4.3 based on a numerical scale where 10 is the maximum obtainable. Significant predictors of reduction in sexual activity following menopause were age at menopause and education. Those attaining menopause between 45 and 49 years were less likely than those at 55 years or more (odds ratio [OR] = 0.21, 95% CI OR = 0.05-0.87) while women with at least secondary education were less likely (OR = 0.33, 95% CI = 0.14-0.80) than those with none to report a reduction in sexual activity after menopause [Table 2]. 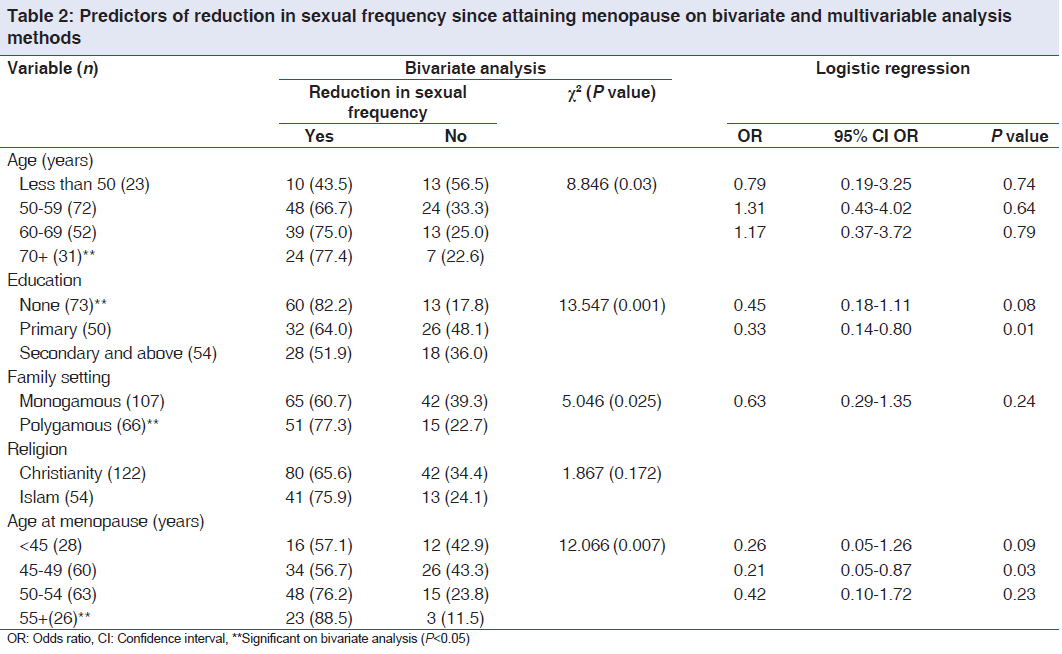 A higher proportion of those with urinary incontinence (75%) compared to 66.9% of those without reported a decrease in sexual frequency; however, this was not statistically significant (P = 0.47) (data not shown).

The prevalence of urinary incontinence in this study is about 10%. This is lower than Waetjen et al. that reported 14.7% among a similar population of women.[12] It is possible that the lower figure in our cohort may be due to smaller sample size or a reflection of the perceived stronger connective tissue amongst the blacks. Urge incontinence was the most common urinary morbidity in this study; this finding is at variance with others where stress incontinence was reported. Majority of the respondents do not feel their urinary incontinence complaint could be treated. This attitude is a reflection of the general perception of women to menopause in Nigeria because it is perceived to be part of normal ageing process rather than a medical illness.

Sexual activities have been previously reported in Nigeria as a taboo in menopausal women. It is not surprising, that only a third is still sexually active. The sexual performance is reported to be less than an average and this activity is significantly influenced by late onset of menopause and higher educational status. The plausible explanation may be due to the superstitious belief in Nigeria that sexual activity is only permissible in those that are still menstruating. It is therefore not impossible to see women that had a hysterectomy at a younger age being denied sex by her spouse. It may then be understandable while women with delayed menopause may be sexually active. In other settings, higher age of attaining menopausal was associated with reduced sexual activity.[6] It was reasoned that the reduction may be due to the challenges poor arousal mechanism with aging. In general, educational status is a widely accepted factor that positively influences reproductive health knowledge. Expectedly, women of higher education have a better sexual knowledge and have used it to their advantage.[7]

Interpretation of findings from this study should be applied with caution due to the following reasons; first, about half of the study population is not currently married and also, a significant proportion of those married are in a polygamous marriage. It is therefore possible that these factors could account for their poor sexual exposure and thus making the women to rate themselves low in sexual performance of women. Second, a higher proportion of menopausal women interviewed are over 60 years; therefore, sexual performance rating of this group of women may be lower and risk of urinary incontinence is higher than younger women.

Nigeria menopausal women could have urinary incontinence as morbidity, but they are not aware that these morbidities could be managed. In addition, Sexual performance among these women reduces and it is strongly associated by age at menopause and education. We recommend advocacy and mass mobilization on appropriate information on reproductive health needs of menopausal women in Nigeria.

This study received support from the Gates Institute, Bloomberg School of Public Health Johns Hopkins University through the Center for Population and Reproductive Health, College of Medicine University of Ibadan, Nigeria.