Cancer patients are at an increased risk of the blood stream infections (BSI) due to their immune-compromised status, repeated hospitalizations, and various procedures. Staphylococci, particularly coagulase negative Staphylococci (CoNS) are noteworthy pathogens in such cases, and the emergence of multi-drug resistance in Staphylococci is a cause of concern. This study was prospectively conducted over a period of 8 months at a cancer institute located in North India to know the prevalence and antimicrobial susceptibility pattern of Staphylococci causing BSIs.

All blood culture samples received from patients suspected of having BSI were incubated in BacT/Alert 3D system (BioMe’rieux, Durham, North Carolina/USA). Subcultures were performed from the bottles flagged as positive. Identification and antibiotic susceptibility of the Gram-positive cocci isolated were carried out in VITEK 2-Compact© system (BioMe’rieux, North Carolina/USA) using GP-ID and AST-P628 cards respectively. The resistance patterns of all Staphylococci identified as pathogens were analyzed.

Table 1: Details of the Staphylococci isolated from BSI

All isolates of S. aureus were resistant to penicillin and were beta lactamase positive, all of them were methicillin sensitive. About 86.9% of CoNS were resistant to penicillin and 15.9% were β-lactamase positive. Methicillin resistance varied with species of CoNS as shown in Figure 1. Average resistance to methicillin was 71% in all CoNS isolates, which is much higher than previously reported.[1] 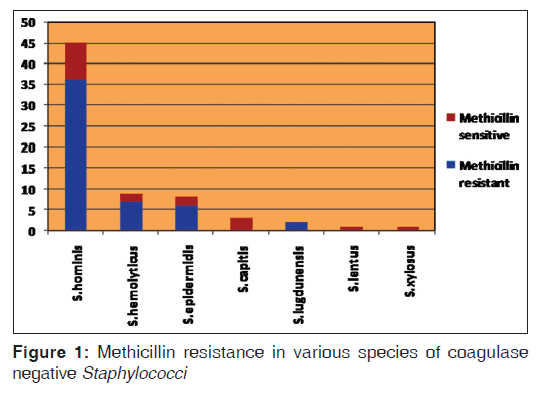 Out of 74 patients who had Staphylococcal bacteremia, 13 patients had a fatal outcome (Crude mortality rate = 17.6%). Two of the patients who expired had hematological cancer while the rest 11 patients suffered from solid cancers, and two patients had neutropenia.[3]

This study shows that Staphylococci, particularly CoNS are responsible for a significant number of BSIs in cancer patients. In the present study, Staphylococcus hominis (60.8%) was the most common Staphylococcal isolate followed by Staphylococcus hemolyticus (12.2%) and Staphylococcus epidermidis (10.8%). High level of methicillin resistance and resistance to first and second-line antibiotics was seen. Reducing susceptibility to teicoplanin was also observed. Susceptibility was maintained to the life-saving antimicrobials like vancomycin, linezolid, and tigecycline.

To conclude, CoNS are important pathogens causing BSI in cancer patients. The high level of methicillin and multidrug resistance and reducing susceptibility to teicoplanin are causes of concern as they further narrow down the therapeutic options in already difficult to treat BSIs in such patients due to their immune-compromised status.