Construction of complete denture with adequate retention is a complex procedure. Use of suction cup in a maxillary denture is one of the techniques to improve retention. Palatal Suction cup, which provides high retention by inducing negative pressure on the mucosal surface, is not being recommended because of its pathological effect on the palatal tissues leading to palatal perforation. Surgical closure of palatal perforation is challenging, technique sensitive, and it can be achieved by different surgical methods depending on the size and location of the defect. In this case report, we present a patient with palatal perforation due to prolonged use of a denture with a suction cup for over 10 years, which was surgically closed by a palatal rotational flap. The result was good as the defect was successfully closed and the donor site healed uneventfully.

A break in the structural integrity of the palate leading to oro nasal communication is called palatal fistula,[1] which may be due to a genetic defect such as cleft lip and palate, an infection such as osteomyelitis or traumainduced by wearing a maxillary complete denture with a suction cup.[2] A suction cup because of its constant pressure on the palatal mucosa can lead to the necrosis of the palatal mucosa and the bone leading to communication between the oral cavity and nasal cavity.[3]

Palatal fistulas are often symptomatic, depending on their size, and location. Symptoms include hyper nasality of phonation due to audible nasal air escape during speech, leakage of fluids into the nasal cavity, and lodging of food with the risk of infection. Depending on the extent of functional impairment, a palatal fistula may have psychological, social, and developmental consequences so it should be repaired.[4]

There are various methods of surgical closure depending on the size and destruction of tissues around the fistula. These options are local advancement flaps such as palatal flaps, tongue flap, nasolabial flaps, and buccal fat pad. Distant pedicle flaps such as myofascial flap, forehead flap, and temporoparietal fascial flap.[5] In this case, we preferred a palatal rotational flap due to the small size of the perforation and the absence of soft tissue thickness around the perforation.

A male patient aged 60 years reported to the department with the complaint of a hole in upper jaw for 2 years. History revealed that he got his denture constructed 10 years back and wearing the suction cup denture [Figure 1] entire day and night and removed them only for cleaning. On examination of the palate, there was a perforation in the palate measuring approximately 2.5 cm × 2 cm in size [Figure 2]. The condition has started as an erythematous patch and has developed over a period of 2 years as a fistula to the current size. On palpation, margins were non tender. All surrounding tissues appeared normal in color and texture. When the patient was asked to gargle water, it escaped through his nose. The maxillary occlusal radiograph showed the loss of bone from mid palate region [Figure 3]. Patient’s medical history was uneventful, and blood investigations were within normal limits. Serological investigations also showed a negative report for venereal diseases. The patient was advised to discontinue the denture immediately, and the surgery was planned by preferring the palatal rotational flap. 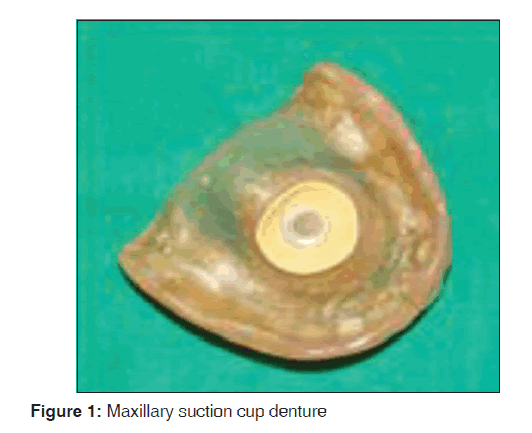 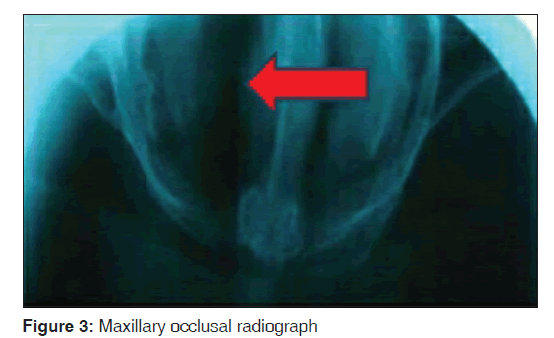 The surgical closure of palatal fistula planned under general anesthesia. It was induced by nasotracheal intubation. Patient placed in the supine position and neck extension achieved by keeping a pillow under the shoulder. Local anesthesia with adrenaline was injected around the lesion for hemostasis. The margins of the fistula were excised to remove the epithelial lining. A palatal flap design was planned based upon the course of the greater palatine artery and marked according to the site and size of the defect [Figure 4]. A partial thickness flap was raised and rotated laterally to cover the defect [Figure 5]. The flap was then secured in its new place using 3–0 black silk sutures [Figure 6]. The donor area which was covered by the periosteum of the palatal bone was the left open for a secondary epithelization. Beta dine dressing was given over the entire area [Figure 7]. One week postoperative review showed that the defect area healed without infection, dehiscence, and the donor site was covered with normal fibrin [Figure 8]. Fifteen days after surgery, the wound in the defect area healed well and the donor site was fully covered with granulation tissue [Figure 9]. Clinical review 2 months later showed healthy pink epithelium covering the donor site on the hard palate [Figure 10]. The bulky palatal flap had shrunk considerably so that the hard palate had retained its normal shape. The patient was referred to prosthodontics for new denture construction. 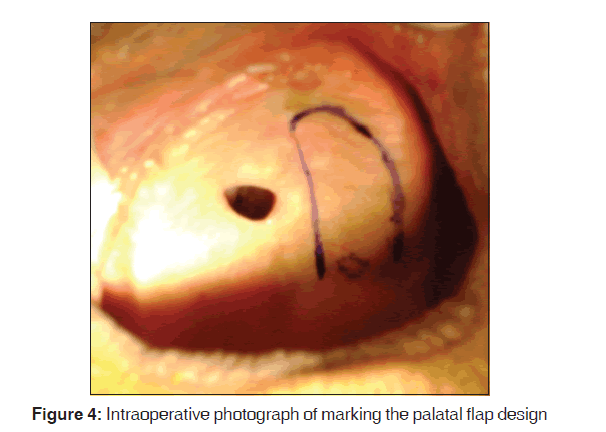 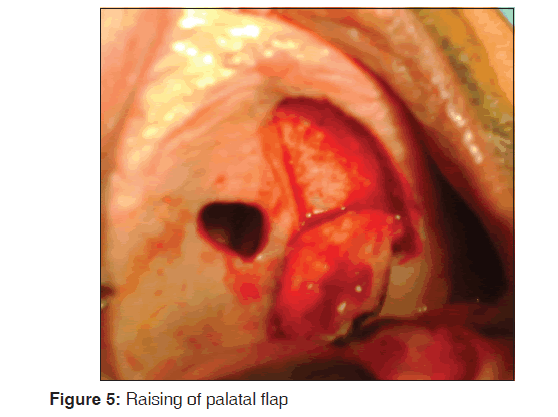 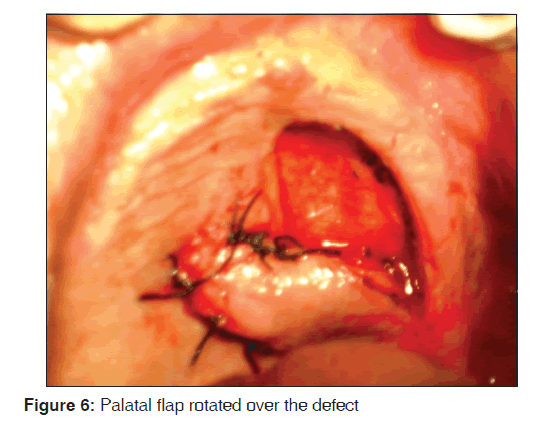 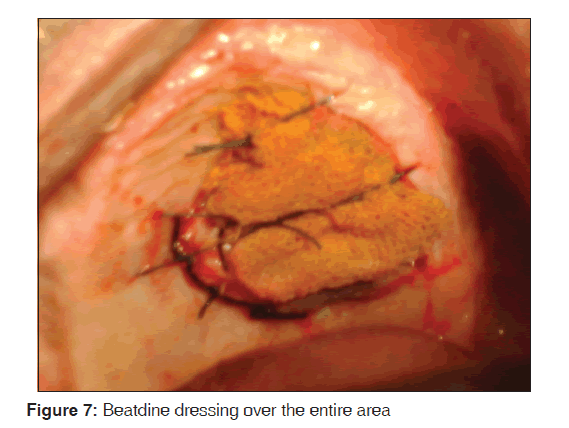 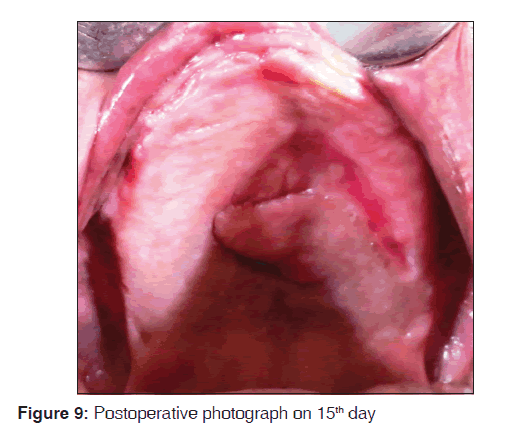 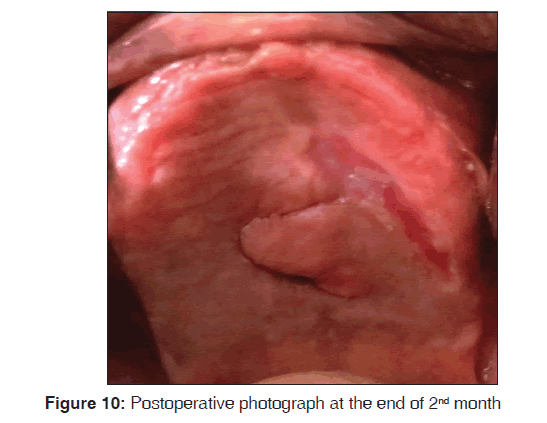 Figure 10: Postoperative photograph at the end of 2nd month

The palatal fistula closure techniques are much studied in the patients with the history of previous surgeries and cleft palate. The management of palatal fistula caused by suction cup begins with educating the patient about the ill effects of continuous use of suction cup denture.[5] Palatal fistula beneath the suction cup under the maxillary upper denture is a challenge for reconstruction.[6] Closures of palatal fistulas are difficult because of the stiffness of palatal mucosa and further complicated by the non availability of adequate tissue for tension-free closure.[1] No single procedure can be satisfactory for all types of palatal fistulas. The choice of operating technique depends on the site and size of the defect and age of the patient.[3] Flap techniques are more successful because there is less tension and increased support for the repair.[7] Depending on the size of the defect, there are various flaps available to close the defect. Palatal flap, nasolabial flap, buccal pad of fat, and tongue flap are the loco regional flaps that can be used to close the fistula. Among the distant flaps that can be used are myofascial flaps, forehead flaps, etc.[3]

Although these methods may have their advantages in certain cases, most are relatively cumbersome and are often complicated by postoperative risks and problems; examples include tissue loss, scar contracture, poor esthetic result, and most importantly, recurrence of the fistula with an incidence as high as 34.2%.[4] Buccal pad of the fat may give a bulky tissue, but when it is mobilized to the palate, it will be insufficient. Nasolabial flap involves extra oral incision and tunneling and hence there will be scar formation. The distant flap again needs extra oral approach, sound technique, and has donor site morbidities such as scar. The main disadvantage of tongue flap is functional loss such as inability in swallowing and speech due to immobile tongue till depedicling.[3] The palatal rotational flaps are advantageous and can be used successfully for the closure of small palatal defects.[5]

The palatal rotational flaps are advantageous as the hard palate has a relatively thick mucoperiosteum layer and good vascularization from the greater palatine artery. Flap raised from the hard palate will therefore have high viability. The other advantages of palatal flap are: It has good vascularity, similarity in thickness with that of gingiva, good esthetic, and good accessibility. The donor site at the palate can be left to granulate and recover within 2–3 weeks with minimal deformity.[8]

In this case, a palatal rotational flap was raised and preferred due to the absence of soft tissue thickness around the fistula and small size of the defect. The palatal rotational flap was used based on the location of the defect where the flap can be easily rotated without any risk of compromising its blood supply. The circular incision made around the fistula opening was important in this procedure as it was the site at which, the flap would be attached to. This was to ensure a good bony support for the palatal flap which would be placed and stitched over the defect. This would prevent the wound dehiscence around the flap. A partial thickness flap was used in this case, instead of full thickness one, to avoid postoperative pain and infection of the palatal bone. As the periosteum at the donor site was not detached the healing would take shorter time if compared with the full thickness flap. The design of palatal flap is important in that it influence the overall result of this procedure, the most critical factor of which being the length and width ratio of the flap. The successful result of the palatal flap depends on the appropriate choice of the type and the design of the flap.[8]

Successful repair of the palatal fistula requires a well-supported, airtight, and tension-free closure. The prognosis for successful surgical repair of palatal perforation is dependent on the surgeon’s ability to achieve a tension-free closure of the defect.[7] The palatal rotational flap can be used for the closure of small palatal perforation because of its various advantages such as ease of technique, high vascular supply, and less donor site morbidity.