Context: Sexual assault is a crime of violence that incorporates unwanted sexual behaviour, such as sexual coercion, uninvited kissing, fondling, touching and ultimately, rape. Individuals prone to sexual abuse are usually the young, poor, and vulnerable members of society, who are often subject to other forms of social vices, such as domestic violence. Aims: To ascertain the pattern of sexual assault in people presenting to a large gynaecological unit of a tertiary referral centre, in Nigeria. Settings and Design: Methods and Material: The study is a descriptive cross-sectional study that was undertaken over a 2-year period from January 2011 to December 2012. Statistical analysis used: SPSS. Results: The prevalence of sexual assault in this study was 1.64%. The majority (90.3%) of victims were single. At least a third (n=35) had secondary education. 62.65% of the patients delayed presentation until after 24hours, (n=52). The commonest reason for delay in presentation was of fear or embarrassment in 51.80% (n=43). The commonest place of assault was at the assailant’s home in 33.7% (n=28). Many cases of assault occurred at night. 63.65% of the victims wanted suspects to be prosecuted (n=53). 67.46% of the victims expressed the desire to take legal action (n=56). Only 51.80% of the respondents (n=43) were aware of a route of seeking re-dress. Conclusions: Victims of sexual assault delay their presentation to health facilities because of fear and embarrassment. A significant percentage of the victims do not know how to obtain medical help.

Sexual assault, a crime of violence, incorporates unwanted sexual behaviour, such as sexual coercion, uninvited relations and ultimately, rape. [1,2] Females are predominantly affected. [3,4] In Nigeria, the sexually assaulted are usually the young, poor, and the vulnerable. [5] Nineteen out of every 20 cases are unreported in Nigeria. [6] Social stigma prevents women from speaking out about sexual abuse. [7]

This study aims to describe the pattern of sexual assault in people presenting to the Gynaecological Unit of a Referral Centre, in Lagos, Nigeria. This study informs future public health measures when seeking to address under-reporting and the silence of victims.

This study has a descriptive cross-sectional design and was conducted over a 2-year period from January 2011 to December 31st 2012. A structured proforma was utilized to interview victims of sexual assault who presented to the gynaecological unit of a referral centre, in Lagos, Nigeria. Socio-demographic and clinical variables were extracted from the questionnaire. The questionnaire data were anonymized and the extracted data were analyzed using SPSS for Windows version 20 (IBM Inc., Armonck, New York, USA).

A total of 5,050 patients presented to the gynaecological emergency room during the study period. Of these, 83 presented with complaints of sexual assault, giving a prevalence of 1.64%. The age range was 5-26 years [Table 1]. Most of the complainants were single (90.3%). Among those who presented with complaints of sexual assault, about a third (n=35) had at least secondary education, while only approximately 10% had tertiary education (n=8). Up to two thirds were unemployed (n=55), leaving just a few having skilled employment (n=3) [Figure 1]. The most frequent type of assault was sexual (n=71). 62.65% of the patients delayed presentation until after 24 hours (n=52) [Figure 2]. The commonest reason for a delay in presentation to medical services was of fear or embarrassment in 51.80% (n=43) [Table 2]. The commonest place of assault was at the assailant’s home in 33.7% of documented events (n=28). Many cases of assault occurred at night - in 28.9% of circumstances (n=24). 81.9% of situations involved a single assailant (n=68). In 85.5% of instances (n=71), the sexual assault was linked to rape. 78.31% of the victims could identify their assailants, as known neighbours or relatives, (n=65). 63.65% of the victims wanted suspects to be prosecuted, (n=53). 67.46% of the victims expressed the desire to take legal action (n=56). Only 51.80% of the respondents (n=43) were aware of a route of seeking redress. 73.49% of the victims, experienced some frustration in seeking help (n=61). All affected patients who presented to the gynaecological emergency unit received postexposure prophylaxis against HIV, prophylactic antibiotics and emergency contraception.

Table 1: Age distribution of patients presenting with a history of assault.

Table 2: Table showing the frequencies of the underlying reasons for delay before presentation of patients with sexual assault complaints. 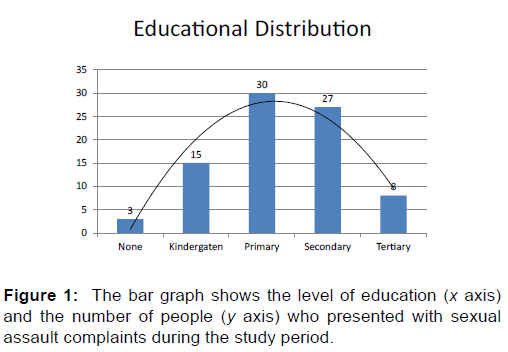 Figure 1: The bar graph shows the level of education (x axis) and the number of people (y axis) who presented with sexual assault complaints during the study period.

Figure 2: Bar chart showing number of patients with sexual assault complaints and how long they delayed before presentation.

The prevalence of sexual assault in this study was 1.64%. This is higher than that reported by Ezechi and co-workers in a dedicated HIV treatment centre in Lagos and lower than the report from Akinlusi. [3] Although lower rates have been reported in other parts of Nigeria, the highly cosmopolitan nature of Lagos with exposure to “night life”, unbridled substance abuse, and the busy nature of parents and guardians may be an explanation for the slightly higher prevalence observed in this study, when compared to some other parts of the country. A much higher prevalence of sexual assault has been documented in studies conducted in South-Africa and parts of India. [8,9]

It must be noted however that in our study, the reported prevalence was from a dedicated gynaecological emergency unit and sexual assault of male victims are therefore not captured. The denominator of the variable used for the estimation of sexual assault could also be a factor, as the denominator consists of patients presenting to the gynaecological emergency unit and not patients who visit the clinic for other reproductive health challenges. This could “over-concentrate” the denominator and thus falsely giving a higher than expected prevalence.

The age range of patients in this study was between 5-26 years of age. This is similar to reports from other workers who reported that sexual assault is commoner among children, adolescents and young adults. [3,7,10,11] These categories of individuals are particularly vulnerable due to their inability to assert themselves, given that they are still dependent on older individuals for most of their needs. [3] The study noted that over 75% of individuals experiencing sexual assault are below the age of 15 years, consistent with Akinlusi’s work. [3] The extremely young age group of pre-school children may not be able to communicate that they are being abused, and this makes them extremely vulnerable.

Adolescents have a higher tendency to be assaulted and they are more likely to present late for intervention. [12,13] Nevertheless, it must be noted that the age range in this study is relatively narrow when compared to other workers who has given reports of upper age range of as much as between 42 and 85 years and a lower age range of between 1yr and 5years respectively. [14]

Delay in presentation was seen as a challenge in this study as over 62.5% of the patients delayed presentation until after 24 hours with a significant proportion presenting within a 72 hour period. Presentation within 72 hours is an important index in cases of sexual assault as it allows victims of sexual assault to access post-exposure prophylaxis intervention and also allow them the opportunity to access emergency contraception. [15] Early introduction of antibiotics will also help to mitigate against the risk of sexually transmissible infections (STI).

The commonest location for the assault was the assailant’s home, as seen in 33.7% of the respondents (n=28). This is similar to Ezechi’s study which also noted the assailants home as the commonest place of assault. [6] A possible explanation for this finding may be related to the average age of assaulted victims being within the younger age range of adolescents; these were young adults who were vulnerable and who could easily be deceived to visit the homes of potential predators who could then take advantage of them. However, this contradicts the findings of Al-Azad and colleagues where the assault mostly occurred at the victim’s house. [5]

In this study, cases of sexual assault were not selective in terms of time of occurrence, as sexual assault occurred during the day, as well as at night. In 81.9% of circumstances, (n=68), one assailant perpetuated the assault . This finding is also similar to findings from other studies. [12] In 85.50% of respondents, there was an associated rape of the affected individuals, thus demonstrating that rape is quite common in cases of sexual assault. This corroborates the results of the study by Draughon and colleagues. [17]

Assailants in this study were familiar to the victims of sexual assault in 78.3% of cases. This finding has been corroborated by other researchers within Nigeria and abroad. [5,6,12,15] First degree relatives, neighbours and individuals in authority, such as teachers, have been shown to be involved in sexual assault. [18,19] Being familiar with the assailants makes it less likely that offenders will be prosecuted as there is a greater tendency to “sweep cases under the carpet” when first degree relatives are involved as assailants. There is a need to ensure that victims of sexual assault obtain the justice that they deserve by allowing victims to come forward in a “no-blame” culture. Although 63.50% of the respondents wanted suspects to be prosecuted (n=53), only 51.80% of the respondents were aware of the route of justice as ignorance of the law, and its processes is still a major challenge to initiating proceedings to prosecute offenders.

Only 32% of the respondents had achieved secondary school level of education (n=32) with 9.6% (n=8) going on to university. The majority were poorly educated, which is consistent with Al- Azad’s results, where the complainants were less educated and of a lower social class. [5] This finding tends to lay credence to the fact that victims of sexual assault are young females who are not empowered and thus vulnerable due to their low socioeconomic status. Another finding from the study that supports this stereotype of victims of sexual assault is the finding that 96.38% of the patients were unemployed and unskilled individuals. This profile of victims of sexual assault has been described by some other authors. [20,21]

This study documents the reticence of sexual assault victims to come forwards for medical assistance. It underlines the need for public health campaigns to educate the public about the need to obtain prompt assistance, particularly with respect to HIV prophylaxis. Furthermore, social awareness campaigns should be encouraged to publicize routes for justice for those subjected to such sexual violence.