The Prevalence and Risk Factors of Obesity among Medical Students at Shaqra University, Saudi Arabia

Background and objectives: Obesity is a health condition in which there is the gathering of the body fat, which arises due to imbalance of intake and expenditure. In recent years Obesity in Saudi Arabia has increased tremendously and it is one of the main causes of the coronary artery disease and diabetes. Our study aims to investigate the reasons behind the prevalence and risk factors of obesity among medical students at Shaqra University, Saudi Arabia. Methods: One hundred fourteen medical students at Shaqra college of medicine participated randomly in a cross sectional study after obtaining their verbal consent. A standard questionnaire included: demographic data, anthropometric parameters, life style patterns, etc has been designed and distributed to the respondents. The obtained data was analyzed using SPSS version 20. Results: The BMI data showed that 8.8% medical students were underweight, 46.5% normal, 25.4% overweight and 19.3% were obese. The results clearly showed that only 46.5% were normal and the rest had abnormal BMI values. Our study showed that, there was not much effect on obesity by consuming the fast food. On the other hand, there was a significant effect of performing regular exercise on obesity. Interpretation & conclusions: Our study findings could be comparable with that reported in Saudi Arabia regarding prevalence of obesity and overweight. We concluded that, regular exercise is a cornerstone in antagonizing obesity while no significant effect of both fast and normal food consumption on it in young medical students.

It is clear obesity is an ailment wherein there is the gathering of body fat, which emerges because of unevenness of intake and use. [1] In the past few years the prevalence of obesity or overweight is terrifically amplified worldwide, predominantly in advanced as well as in emerging countries. [2,3] According to reports in 2018 by the World Health Organization (WHO), obesity approximately increases 3 times since 1975. [4] The findings revealed that 39% were overweight at or above 18 years of age, and 13% obese. In addition, 41 million kids younger than 5 were obese or overweight and more than 340 million youngsters and youths (Age between 5-19) in 2016. [4] Of note, obesity in 2016 rose sharply from 4 per cent in 1975 to almost 18 per cent for kids and young people (aged 5–19). [4]

The overweight and obesity categorization by body mass index (BMI) is clarified beforehand. [5] We discern BMI is a wellknown and investigative apparatus for shaping the obesity and overweight. [6] The BMI is measured as the body weight (BMI = Mass/Height2), divided by the square of the body height and it is frequently written in Kg/m2. [7] As appeared in Table 1, the BMI under 18.5 is considered as underweight, ranges 18.5-24.9 as normal, among 25.0-29.9 overweight, among 30.0-34.9 Obesity I, between 35.0-39.9 obesity II and BMI which is equal to or greater than 40 is considered as extreme obese III.

Table 1: Classification of underweight, normal, overweight and obesity by BMI according to WHO, 1997.

The accrual data show that obesity is a severe and chronic medical condition, which increment the danger of numerous medical issues including metabolic disorder, hypertension, plaque formation, coronary illness, neurological disorder, elevated sugar in blood, elevated blood fats, malignant growths and sleep maladies. [8,9] Obesity results from multiple factors including energy imbalances, less physical activities, genetic syndromes and endocrine disorders, certain medicines, family history, lifestyle, or other environmental factors. [9,10] The obesity patterns are exaggerated by voluminous surplus factors also, for instance, racial or ethnic contrasts, age, and gender. [11] Obesity/overweight in Saudi Arabia, principally among women, has ominously increased in latest years and is among the leading triggers of cardiovascular disorder and diabetes. The research data demonstrated that obesity is the fundamental driver of numerous non-transferable diseases in Saudi Arabia. [12] The data exposed that the pervasiveness of obesity was 36.9%, which was more conjoint in male as paralleled to female and amazingly the pervasiveness of overweight in males was 42.4% in contrast to females which was 31.8%. [2] The overall obesity predominance was 35.5% and remarkably female was more obese as compared to male. [2] The survey convoyed in Jeddah, Saudi Arabia among females publicized 33.8% obesity. [13] Some others region of Saudi Arabia, for example, in Jizan, Riyadh, and Hail, 12%, 22% and 34% people were found obese respectively. [14] In some rural Areas of Saudi Arabia only four percent obesity was found. [14]

In this investigation, we have directed a survey by concocting a questionnaire and bashed to discern the popularity of the obesity among young medical students (Mean age 21.28). We calculated the BMI as reported previously and compared the BMI data and find out the percentage of underweight, normal, overweight, obesity I, obesity II, extreme obese III by using the software Statistical Package for Social Sciences (SPSS). The effect of taking the fast food and doing regular exercise on obesity parameter was determined by SPSS. As well, we dissected the medical antiquity of the students in concerns to diabetes and determined the level of student families experiencing diabetes.

A cross-sectional examination was directed among Shaqra college medicinal students, Saudi Arabia in a time of seven days in the academic year 1439 – 1440, Shaaban month. The samples comprising 114 male medical students were equally selected by systematic random technique from students list. BMI was considered as an adiposity indicator in this analysis. BMI is the weight factor quite prevalently used in connection to height. BMI is feasible and specific. Body weight was estimated to the closest 0.1 kg utilizing a standard balance scale manufactured by OHAUS New Jersey, United States. Subjects without shoes and wearing very light indoor clothes. At nearest 0.5 cm, body height was detected without shoes by a ruler fixed to the wall. BMI will be calculated through the division of body weight (kg) by the square of height (m). [15] According to WHO the BMI rummage-sale in the analysis is usually referred to as: Underweight<18.50, Normal 18.50-24.99, overweight ≥25 and obese ≥30 (9). SPSS (version 20) was employed for anatomizing of data. [15] Data were gathered using a pre-designed self-administered questionnaire including the following: Sociodemographic data such as including BMI, age, residence, faculty, family monthly income in Saudi Riyal, etc.

We have gathered the substantial data including stature, weight, age, family ancestry about diabetes, smoking propensity, regular exercise, and food habits about the medical students by setting up a questionnaire. By utilizing the weight and tallness data, we have determined the BMI by utilizing the recipe, BMI=weight/ Height2. The BMI data [Figure 1] showed that 8.8% medical students were underweight, 46.5% normal, 25.4% overweight and 19.3% were obese. Figure 1: This figure depicted the percentage of underweight, normal, overweight, and obese based on BMI among medical students at Sharqa University, Saudi Arabia.

The outcomes plainly validated that solitary 46.5% ordinary were typical and remainder had irregular BMI, which is a disturbing sign for the coming ages in Saudi Arabia. As mentioned above the obesity is one of significant hazard factors for some non-transmittable maladies in Saudi Arabia. Recently, a cross-sectarian survey has taken place in the Faculty of Medicine, Northern Border University, Ar’ar, Saud Arabia (between 2015 and 2016) among medical students (aged 19-25 years), with finding that 10.6% were weightless, 58.3% were average, 21.7% were obese, and 9.4% were obese. [16] Another work was conducted by Al-Rukban M from September 2001 to January 2002. Overweight was 13.8 percent and obesity was 20.5 percent on 894 Saudi teenagers in Riyadh (11-20 year olds). [17] In addition, the information got by Ibrahim et al. by a cross-sectional investigation in Jeddah University during 2012-2013 delineated that 19.1% and 12.7% were overweight and obese respectively. [18] Another investigation completed among University students in Jeddah, Saudi Arabia by Baig et al. demonstrated 29.8% overweight, 10.7% moderately obese, and 7.9% seriously obese. [19] A study conducted in Dammam City, Saudi Arabia among male students found that overweight was 24.5%; obese were 11.9% and severely obese 10.7%. [20] 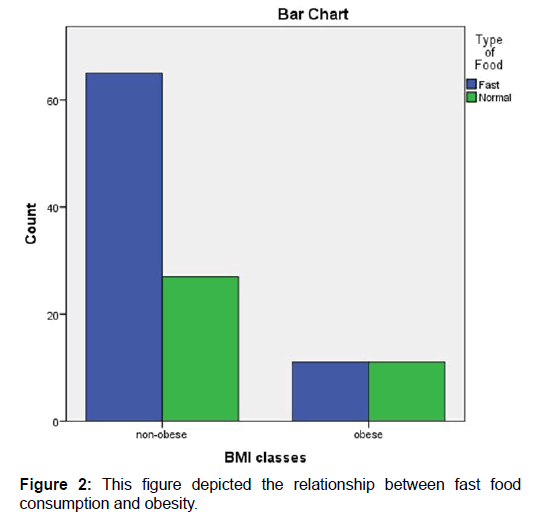 Figure 2: This figure depicted the relationship between fast food consumption and obesity. Figure 3: This figure showed the mean age of medical students. Figure 4: This figure depicted the percentage of students among obese and non-obese performing regular exercise or not.

We also studied to find the family history of students regarding to diabetes. As depicted in the Figure 5, 37.7% families are suffering from diabetes and 62.7 are non-diabetic which is an alarming signal accounted for a health issue in Saudi Arabia. We need extensive research in this area and need to explore the factors which are responsible for this. We recommend changing the life style, in term of performing regular exercise and avoiding fast food consumption to minimize the chances of developing obesity and diabetes. Figure 5: This figure depicted the family history of diabetes.

We concluded that, regular exercise is a cornerstone in antagonizing obesity while no significant effect of both fast and normal food consumption on it in young medical students as our study findings could be comparable with that reported in Saudi Arabia regarding prevalence of obesity and overweight.

We thank the College of Medicine, Shaqra University, Saudi Arabia for providing the necessary facilities for the preparation of this manuscript. We are also very grateful to the medical students who participated in this survey.