Ferula assa-foetida L. grows wildly in the south and central mountains of Iran. Different spices of Ferula are good sources of biologically active compounds like sesquiterpene derivatives.[1] Asafoetida, which is an oleo-gum-resin yielded by incisions in roots of F. assa-foetida, is traditionally used for treatment of gastrointestinal disorders such as spasm and constipation.[2] In India and Fiji, It is used for the treatment of stomachache.[2] American people use it orally as a powerful antispasmodic and antihelminthic.[3] Antispasmodic and hypotensive effects of asafoetida were investigated by Fatehi et al.[4] in animal models, but there is no study indicating the antispasmodic of F. assa-foetida seed’s essential oil (FAFSEO). However, according to our literature review only an investigative research the antifungal activity of FAFSEO against Aspergillus niger and Aspergillus flavus was reported in an in vitro study.[5] This study was conducted to evaluate the relaxant effect of FAFSEO on isolated rat’s ileum and comparing this with the effect of asafoetida.

Asafoetida was collected from Tabas region (eastern part of Yazd province) during the summer. F. assa-foetida seeds were provided by Agricultural Research Center (Yazd, Iran) and identified by a botanist in this center. The dried powdered of asafoetida (5 g) was soaked overnight in distilled water (100 ml) at room temperature and filtered for daily use. Concentrations and doses of the aqueous extract are expressed as the total amount of the dried gum used in preparing the extract. 200 g of F. assa-foetida seeds were gently grounded and mixed with 500 ml of double distilled water. Then, it was extracted by soxhlet apparatus and the essential oil was separated from the distillate. In this extraction, the amount of essential oil 1.5% V/V.

Male Wistar rats (250-350 g) were kept in automatically controlled temperature conditions (23 ± 2°C), in 12 h light-dark cycles, with food and water “ad libitum.” 48 h prior to the experiments, the animals were kept in the laboratory and 24 h prior to the experiment, they were deprived of food. All experimental procedures were approved by the animal care and use committee of Shahid Sadoughi university medical sciences.

Assessment of antispasmodic and spasmolytic effect

In this study, 0.1, 0.2 and 0.3% of asafoetida aqueous extract and FAFSEO were examined for their spasmolytic and antispasmodic action. Experiments were performed as described previously by Hejazian et al.[6] Briefly, adult male rats were sacrificed by cervical dislocation. Segments of ileum (5 cm in length), were excised, flushed their contents and trimmed them of mesentery. The specimens were conserved in Tyrode’s solution until the onset of the experimental procedure. The tissue samples were fixed at the bottom of the internal chamber of an organ bath containing 50 ml Tyrode’s solution in the axis of its longitudinal muscle and its opposite end was tightly tied to the isotonic transducer lever with a piece of trade. The chamber was maintained at 37°C and bubbled with 95% O2 and 5% Co2. Isotonic responses were recorded using an isotonic transducer (T2 bioscience) and an oscillograph recording system (the bioscience 400 Series Washington ocillograph). In each experimental trail, the specimen was allowed to stabilize for 15 min prior to the addition of drugs and washed out in 30 min intervals by a fresh Tyrode’s solution. For antispasmodic evaluation, the tissue specimens were first exposed with different concentrations of asafoetida and FAFSEO for 20 min. Then, the contractile response of specimens induced by cumulative acetylcholine (Ach) concentrations (10−12 up to 10−2 M) was recorded. For spasmolytic evaluation, control contractions were obtained by adding Ach (10−4 M) to each tissue preparation and after 5 min, the action of different asafoetida and FAFSEO concentrations (0.1, 0.2 and 0.3 (0.03/10)%) on this maximum contraction were recorded.

The drugs used were: Ach iodide (from the Sigma Chemical Company, St. Louis, USA), stored at −4°C and diluted to the desired concentrations in 0.9% saline just before use. Glucose, NaCl, KCl, CaCl2.2H2O, MgCl2.6H2O, NaHCO3 and NaH2 PO4 was acquired from Merck KGA, Darmstadt, Germany.

The effect of different solutions on Ach induced contractions were expressed as mean ( standard error of mean) of the contraction amplitude. All statistical analysis was by GraphPad Prism 5 (San Diego, California) and comparisons were made by means of the analysis of variances followed by Tukey’s test. The statistical significance was considered as P < 0.05.

As shown in Figure 1, asafoetida produced an antispasmodic effect on Ach induced contraction in 0.2% and 0.3% concentrations (P = 0.02), but its 0.1% had no effect on tissue contractions. Our findings also showed that essential oil has significant antispasmodic action against cumulative concentrations of 10−12 up to 10−2 M Ach [P = 0.03, Figure 2]. In the other hand, the same concentrations of asfoetida and essential oil showed similar effect. In spasmolytic evaluation, our findings showed that the essential oil derived from F. assa-foetida seed in concentrations of 0.2 and 0.3% significantly reduced Ach (10−4 M) induced contractions [35.6 (4.12) and 8 (2.4), respectively vs. 100, P = 0.03, Figure 3]. Exposure to the 0.2 and 0.3% asafoetida, reduced the percentage of maximum contraction induced by 10−4 M Ach to 43% and 12% respectively, which this reduction was statistically significant [P = 0.02, Figure 4]. 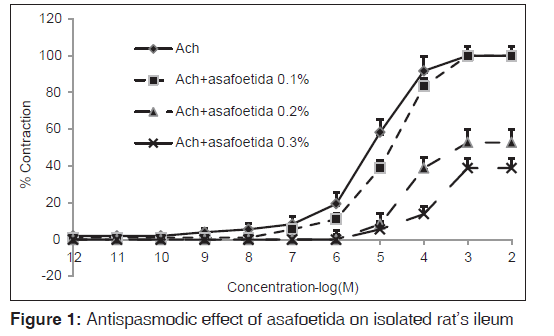 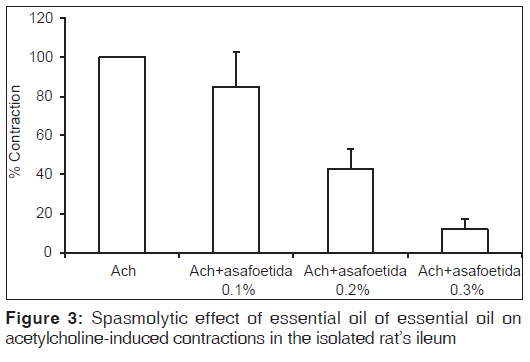 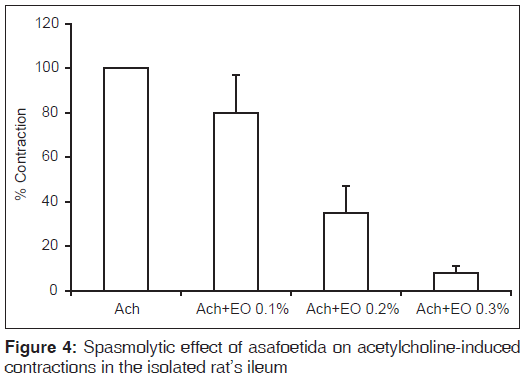 Figure 4: Spasmolytic effect of asafoetida on acetylcholine-induced contractions in the isolated rat’s ileum

Asafoetida has a characteristic sulfurous odor and a bitter taste and used as folk phytomedicine for centuries. It is used for treatment of several disorders throughout the world. In Iran and several other countries, asafoetida is traditionally used for the treatment of gastrointestinal diseases, hypertension and asthma.[2] In India, asafoetida is used as a useful symptomatic treatment for angina pectoris and asthma.[7] The analysis of asafoetida showed that it consists of resin (40-64%), gum (25%) and essential oil (10-17%).[2] Its resin component consists of sesquiterpenecoumarins with assaresinotannol as a key constituent in the free form or as esters of ferulic acid while its gum portion is mainly consists of carbohydrates.[8] the essential oil obtained from F. assa-foetida contains sulfur and terpenoid compounds. The most frequent terpenoid compounds that occurred as main components in the essential oil were α-pinene, β-pinene, myrcene and limonene.[9] FAFSEO analysis also showed that this essential oil consists of terpenoids and sulfur components; however, the amount of monoterpene hydrocarbons, sesquiterpene hydrocarbons and oxygenated sesquiterpenes are higher in FAFSEO than oleo-gum-resin, but sulfur-component of oleo-gum-resin is greater than FAFSEO.[10] In this study, asafoetida and FAFSEO showed a potential relaxant effect on isolated ileum in animal model. These agents induced their relaxant effect in a concentration dependent manner. Various mechanisms are involved in gastrointestinal smooth muscle relaxation. These include the blocking action on excitatory pathways such as cholinergic,[11] histaminergic[12] or mimicking the action of inhibitory systems such as adrenergic,[13] purinergic,[14] GABAergic[15] and/or nitric oxide.[16] The observed relaxant effect for the asafoetida in the present study supports the findings of previous investigations.[8] Fatehi et al. Showed that asafoetida has a potent antispasmodic and hypotensive effects. This researcher was concluded that the relaxant effect on vascular and ileal smooth muscles was via reducing the cytosolic Ca2+ in anon specific way.[4] A muscarinic receptor blockage was also suggested for this extract by Gholamnezhad et al.[17] They also indicated a small contribution of histamine (H1) receptor inhibitory property of asafoetida on its relaxant effect. However, they suggested that adrenoceptor stimulation effect of the extract did not contribute to its relaxant effect. In this study, antispasmodic effect of FAFSEO was also investigated. Although, there are few studies indicating the relaxant effect of asafoetida, this is for the first time that the antispasmodic action of FAFSEO is investigated. The essential oil has a similar, but stronger characteristic odor and bitter taste of asafetida, which suggest the present of similar chemical composition for these to preparations from F. assa-foetia. In conclusion, the results of the present study supports the traditional claim of asafoetida as an antispasmodic therapeutic. Furthermore, according to the present finding the spasmolytic and antispasmodic action of FAFSEO was stronger than asafoetida which may be due to the concentrated constituents in the oil. However, the quality and quantity of its biologically active components, their probable chronic toxicity and their exact mechanisms of action on gastrointestinal motility needs to be further investigated.

The authors give thanks to all people who have assisted the experimental procedure and to the research deputy of Yazd Shahid Sadughi Medical University as the sponsor of this research.