Any adult with diabetes in the tropics with hand cellulitis, infection and gangrene qualifies for tropical diabetic hand syndrome (TDHS). We reviewed a 39âÂÂyearâÂÂold woman with a 3âÂÂweek history of swelling of the left index finger following an insect bite. The swelling progressively increased in size, was very painful, and extended to the palm. There was no history or symptoms suggestive of chronic complications of diabetes. Random blood sugar on presentation was above 600 mg/dl using a glucometer. Examination revealed an edematous left palm draining pus from multiple sinuses, necrotic and gangrenous left index finger extending down to just above the thenar eminence. A diagnosis of TDHS in a patient with hyperosmolar state was made. She was managed accordingly and subsequently underwent aggressive debridement and desloughing. Two fingers were amputated and the wound was allowed to heal by secondary intention.

Patients with diabetes mellitus have impaired immunologic responses to combat infections.[1] Limb infections are major causes of morbidity and mortality in people living with diabetes.[2,3] Tropical diabetic hand syndrome is a terminology used to describe a specific acute symptom complex found in diabetic patients in the tropics.[1-4] The syndrome comprises can rapidly progress to synergistic gangrene (Meleney’s gangrene), affecting the entire limb and extending to the superficial fascia that can result in death within the days of onset of symptoms.[4-6]

We reviewed a 39-year-old civil servant who presented at the accident and emergency with about 3 weeks history of swelling, affecting the left index finger following an insect bite. The patient is a middle aged woman, obese (body mass index [BMI] 36.4/m2). She is a known diabetic diagnosed 6 years ago and hypertensive diagnosed about 12 years ago and has been on oral anti-diabetic drugs and anti-hypertensive drugs but no compliant with her medications. The swelling was said to have progressively increased in size extending to the palm. There was associated history of severe pain that was throbbing in character and continuous, usually relieved by elevating the hand and taking some analgesics. Pain was severe, continuous, throbbing, and nonradiating. It was relieved by elevating the hand and analgesics with no known aggravating factor. After a week, the swelling later became pustular and opened up spontaneously, discharging foul smelling effluents leaving an ulcerated area in the index finger. The surrounding skin became reddened and swollen and gradually became black with loss of sensation at the tip of the fingers.

There was a positive history of weight loss, excessive urination, and excessive intake of water. There was no history of fever, vomiting, or symptoms suggestive of chronic complications of diabetes. There is a positive history of diabetes and hypertension in the family. For the above complaint, the patient took over-the-counter drugs and herbal remedies without any improvement which made her come to the teaching hospital.

The obstetric history was not significant. On examination, she was obese (BMI 36.4 kg/m2), not in any obvious distress, afebrile to touch, not pale or jaundiced, acyanotic, no pedal edema, and no lymphadenopathy. Random blood sugar on presentation was above 600 mg/dl, using a glucometer.

An edematous left palm draining pus from multiple sinuses, necrotic and gangrenous, left index finger extending down to just above the thenar eminence. The blood pressure was 150/90 mmHg, pulse rate was 96 b/m. First and second heart sounds were heard. Other systems were essentially normal.

A diagnosis of tropical diabetic hand syndrome (TDHS) was made. She was managed initially as a case of hyperosmolar state with insulin and intravenous fluids. She was also placed on intravenous ceftriaxone 1g 12 hourly and intravenous metronidazole 500 mg 8 hourly. Wound swab-yielded moderate growth of coliform. She underwent aggressive debridement and desloughing over the next 1-week. Two fingers were amputated at the level of metacarpophalangeal joint. The wound was allowed to heal by secondary intention [Figures 1 and 2]. 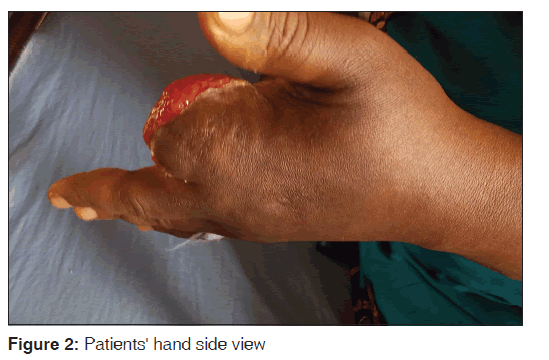 Any adult with DM in the tropics with hand cellulitis, infection and gangrene qualifies for TDHS.[1-4] It is a terminology used to describe a specific acute symptom complex found in diabetic patients in the tropics usually follows minor trauma to the hand and associated with progressive synergistic form of gangrene. The syndrome comprises: (a) Localized cellulitis with variable swellings and hand ulcerations (b) fulminant hand sepsis, (c) gangrene affecting the whole limb. It can rapidly progress to synergistic gangrene (Meleney’s gangrene), affecting the entire limb and extending to the superficial fascia that can result in death within the days of onset of symptoms.[4-6]

TDHS is a less, well-recognized hand infection and not generally classified as a specific diabetic complication and if not well managed could lead to permanent disability and death. It occurs primarily in diabetic patients living in tropical and coastal areas (climatic: Humidity) with male preponderance and a median age of 52 years.[4]

There is often a history of antecedent minor hand trauma (such as insect bite in our index patient). Presentation to hospital is often delayed due to the patients’ unawareness of the potential risks, lack of concern because the initiating trauma might have been trivial, or decision to seek initial treatment from local healers.

TDHS is different from diabetic hand syndrome, which consists of joint limitations (inability to fully extend a finger) and thickened skin of the hand, especially involving the dorsum of the fingers.[4,10] While peripheral vascular disease and peripheral neuropathy are well-known risk factors for diabetic foot ulcers and foot infections, neither appear to play a substantial role in the pathogenesis of TDHS.[4,7] Severe hyperglycemia, however, appears to be a strong risk factor.[1,2,4,11]

In a review of 72 cases by Abbas et al.[4] most patients had type 2 diabetes and presented with a median blood glucose of 280 mg/dl. Peripheral neuropathy was seen only in 14% of the cases. Precipitating factors were hand trauma - 26%, itching from insect bite - 15%, boils - 10%, innocuous papules - 13%, and unknown - 32%. All the 72 patients had hand ulcerations; 61 (85%) were purulent, 23 (32%) had a deep ulcer which involved the bone, and 17 (24%) had localized or widespread gangrene of the arm. The median time between onset of symptoms and initial clinical evaluation by a physician was 14 days.[4]

Appropriate antimicrobial therapy has to be instituted immediately based on antibiotic culture and sensitivity testing.In our center, because of limitations due to possible delays in taking tissue biopsy and indiscriminate use of antibiotics in the community, we used broad spectrum antibiotics on presentation. Without prompt and aggressive treatment, TDHS can lead to permanent disability, limb amputation, or death.[6,10] Often the surgical incision must extend along the entire area of erythema and induration because the infection often is more extensive than suspected. Observation, local wound care, and the administration of oral antibiotic agents are not acceptable substitutes for surgical decompression in the diabetic patient with a hand infection.[1,4]

Our case emphasizes the need for the high index of suspicion among clinicians in a setting, where it has otherwise not been reported as rare, and treat it aggressively to prevent complications which have potential for socioeconomic burden. Prevention strategies include patient and staff education that focuses on proper hand care, drug adherence, nutrition, and the importance of seeking medical attention immediately following hand trauma regardless of the severity of the injury.