Incisional hernia represents a breakdown or loss of continuity of a fascial closure. These hernias are of particular concern not only for the high recurrence rates among them but also for the challenges that follow their repair. It is known to occur in 11âÂÂ23% of laparotomies. This paper presents two unusual complications of incisional hernia managed by the authors. One ruptured incisional hernia with evisceration of gut and a case of incarcerated gravid uterus in a woman in labour. The case records of the two patients with unusual complications of incisional hernia were pooled and presented to highlight the clinical presentation and management options of this condition. The patient with ruptured hernia and eviscerated gut presented immediately and was resuscitated and the hernia repaired with polypropylene mesh. The patient with incarcerated uterus had caesarean section and mesh repair of the hernia. Incisional hernia can present with unusual complications. The management is very challenging. Good knowledge and skills are required to deal with this condition.

Incisional hernia (IH) represent a breakdown or loss of continuity of a fascia closure.[1] IH occur in 11‑23% of laparotomies.[2] It enlarges over time and can give rise to such complications as pain, discomfort, bowel obstruction, incarceration and strangulation. Furthermore, IHs reduce the quality‑of‑life and the chances of employment.[3] Prolonged pressure and stretch on skin leads to skin problems such as attenuated skin, depigmentation or hypopigmentation of the skin, ulceration and infection.[3]

These hernias are of particular concern not only for the high recurrence rate among them, but also for the challenges that are associated with their repair.[4]

A 35‑year‑old woman presented at the accident and emergency department of Imo State University Teaching Hospital (IMSUTH), Orlu with evisceration of gut of 1 h duration. This occurred following a fall by patient. Patient was running away from armed robbers who came to her house and fell down, landing with her outstretched hands. She subsequently noticed that her gut was eviscerated. There was no associated bleeding or loss of consciousness. Patient was rushed to the emergency unit of the hospital and. She had cesarean section 4 years earlier.

Patient was admitted into casualty. The eviscerated gut was washed with normal saline and covered with abdominal mop soaked in warm saline and was rehydrated with intravenous fluid. Nasogastric tube was also passed.

She was then taken to the theater within 1 h and had repair with on lay Polypropylene mesh. Post‑operative period was largely uneventful, but had seroma and superficial wound breakdown. This healed on daily dressing. She was discharged after 3 weeks.

She was followed‑up for 1 year and there was no evidence of recurrence or any other complication. 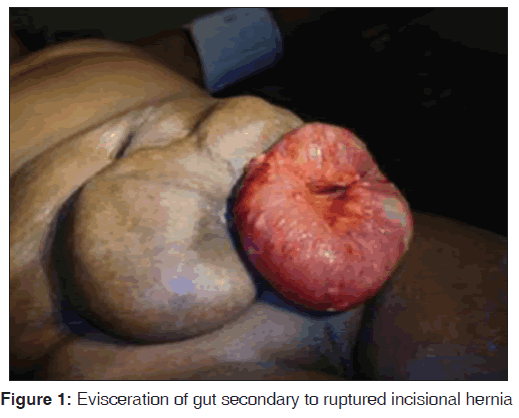 A 34‑year‑old gravida 2 para 1 woman who presented in an accident and emergency department with incarcerated gravid uterus.

She had one previous cesarean section, 2 years ago and the pregnancy was being managed in a private hospital. She went into labor and due to the non‑progressive descent of the fetal head, was referred to IMSUTH, Orlu.

On presentation, she was found to be in labor, gestational age was 39 weeks. Herniated gravid uterus was irreducible even when the uterus was not contracting.

Patient was followed‑up for 1 year and had no other complication. 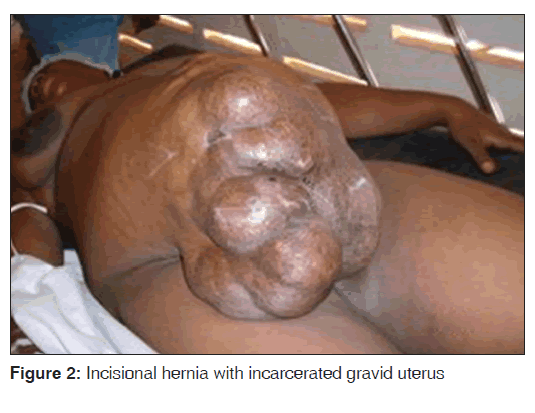 The challenge in managing this type of hernia include problem of loss of domain due to the prolonged housing of intra‑abdominal viscera outside the abdominal cavity. This can lead to raised intra‑abdominal tension when the hernia contents are reduced or from attenuated respiratory muscle that make it difficult for patients to ventilate themselves during the post‑operative period. Abdominal hypertension can also lead to serious intraoperative and post‑operative hypertension hypotension due to compression of the inferior vena cava.

In Benin and Zaria, the most common operation leading to IH was cesarean section (37.5% and 66%, respectively), just like our 2 index cases of complicated IH are all complications of cesarean section.

Ezeome and Nwajiobi recorded cesarean section as the most common surgery that leads to IH in Enugu.[4] It may not be unrelated to the fact that most of the cesarean sections are performed as emergencies and wound closures are hurriedly performed.[7] Besides, most are carried out by surgeons who are below consultants status and general practitioners whose surgical techniques are queried. This category of “surgeons” most times do not use non‑absorbable sutures in fascia closure.[8] Even when cesarean section is excluded, it is still more common in females. This is likely because females are more prone to develop IH due to the lax abdominal muscles and stretched fascia planes from repeated pregnancies, especially in Nigeria.[9,10] IH, can present early after the index surgery or many years subsequently.[5] The two cases, we managed, presented many years after the primary surgery. They presented with unusual cases, which are ruptured IH with extravasation of bowel contents and IH with incarcerated gravid uterus in a woman in labor.

Spontaneous rupture of abdominal hernia is very rare and usually occurs in incisional and recurrent groin hernia.[11] Only few cases of spontaneous rupture of abdominal hernia are reported in the literature. Large IH is contained only by its sac and thin avascular skin. Larger the hernia, more atrophic and avascular is the overlying skin and this along with thin sac leads to higher chances of rupture of IH.[12] Neglect for early operative intervention or delay in seeking for treatment increases the risk of rupture.[13,14] The rupture may be sudden following any event, which can increase intra‑abdominal pressure such as coughing, lifting heavy weight, straining at defecation and micturition or it may be gradual after developing an ulcer at its base.[12] In our case, rupture of an IH occurred due to the sudden rise in intra‑abdominal pressure following a fall, in which patient landed on the ground with his outstretched hands. The hernia contents can be covered primarily by mesh repair if the general condition and condition of the operative site allows or can be covered by skin followed by delayed mesh repair. [15] In our case, we covered the hernia contents primarily by polypropylene mesh.

Only 10 cases of herniated gravid uterus in IH have been recorded in the world literature as in October 2006.[1,16] None of the patients had incarcerated uterus in a woman in labor due to IH.

Herniation of gravid uterus is probably rare because of the fact that by the time the uterus reaches the level of hernial aperture, it is usually too large to enter the hernia sac.[11,16] Careful management is necessary due to potential complications such as spontaneous abortion, preterm labor, accidental hemorrhage, intrauterine fetal death and rupture of the lower uterine segment during the labor.[11,16] An infrequent, but more serious complication is incarceration of gravid uterus with or without strangulation along with ulceration and excoriation of the overlying skin.[12,17] The index case presented with incarcerated uterus in a woman in labor.

The management of pregnant patients with IH depends upon the trimester they are presenting. For those presenting early in pregnancy, manual reduction of hernia and use of an abdominal binder during the antenatal period and labor has been applied with varying success.[12,13,17,18]

Surgical intervention in the form of antenatal hernia repair in the second and third trimesters has also been undertaken in two patients and then the pregnancy carried to term and normal vaginal delivery allowed.[14,19] This approach however is associated with a significant risk of anesthesia during pregnancy. Moreover, the enlarged uterus itself may hinder optimal herniorrhaphy and further enlargement with advancing gestation may disrupt the hernia repair.[15,20] Strangulation at or near term appears to be a genuine indication for early hospitalization and elective caesarean section, possibly combined with hernia repair, which has successfully been reported.[11,12,16,17] Our index patient presented in labor, cesarean section combined with hernia repair using polypropylene mesh was done.

In cases of ruptured hernia with eviscerated gut although wound is contaminated, immediate repair of the hernia with polypropylene mesh can be performed as was done in one of the case presented here. Polypropylene prostheses, due to their macroporous structure, are sufficiently resistant to infections.

In addition, poly propylene mesh allows for ingrowth of native fibroblasts and incorporation into the surrounding tissue.[21] This further allows blood supply to the mesh and further enhances its resistances to infections.

In conclusion, this article has presented some unusual complications of IH and the ways of managing them. 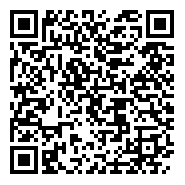