Background: Metallo-β-lactamases (MBLs) are carbapenem-hydrolyzing enzymes that give Gram-negative bacteria the exceptional ability to resist the antimicrobial onslaught of the carbapenems such as imipenem and meropenem. MBL-producing Gram-negative bacteria exist in the community and hospital environment and they put their use of the carbapenems at risk.
Aim: This study phenotypically evaluated the prevalence of MBL-positive bacteria from carbapenem resistant Gram-negative bacteria of abattoir and poultry origin.
Materials and methods:
A total of 370 environmental samples comprising samples from abattoir tables, anal swabs of cow and cloacae swab samples of poultry birds were bacteriologically analyzed for the isolation of carbapenem Gram-negative bacteria. Antibiogram was determined by the modified Kirby-Bauer disk diffusion method and MBL production was confirmed using the modified Hodges test (MHT) technique. Nitrocefin sticks were used to screen the bacterial isolates for β-lactamase production.
Results: A total of 168 Escherichia coli, 141 Klebsiella species and 147 Pseudomonas aeruginosa isolates were recovered from the samples. More than 50% of the isolated Gram-negative bacteria were highly resistant to carbapenems, cephalosporins, aminoglycosides and fluoroquinolones. β-lactamase production was detected in E. coli (38%), P. aeruginosa (33%) and Klebsiella species isolates (29%). The E. coli isolates was resistant to imipenem (51%), meropenem (55.4%) and ertapenem (86.9%). Klebsiella species and P. aeruginosa showed resistance to imipenem, meropenem and ertapenem at the rates of 41.1%, 43.3%, 84.4%; and 66.7%, 60.5%, 61.2% respectively. MBL was phenotypically detected in 22 (39.9%) carbapenem-resistant E. coli isolates, 21 (45.7%) Klebsiella species isolates and 20 (38.9%) P. aeruginosa isolates.
Conclusion: Conclusively, this study reported the occurrence of MBLproducing E. coli, Klebsiella species and P. aeruginosa isolates from abattoir and poultry sources. The occurrence of MBL-producing bacteria in abattoir and poultry samples portends serious health implication for humans who depend on these animals for source of food; and this is due in part to the transmission of drug-resistant bacteria to human population.

Food-producing animal’s habouring Gram-negative bacteria possessing multidrug resistant genes together with genes that provoke the production of metallo-beta-lactamases (MBLs) possess health risks to the human population. This is because bacterial pathogens positive for MBL production are resistant to the carbapenems, which are widely used to treat serious Gram-negative infections including those caused be extended spectrum β-lactamase (ESBL)-producing bacteria. One of the biggest current challenges facing the health sector across the globe especially in the area of infection control and prevention is in the adequate containment of multidrug resistant Gramnegative organisms (MDRGNOs), especially those that have been previously reported to produce MBLs. [1-4]. MBLs are carbapenem-hydrolyzing beta-lactamases which belong to molecular Class B of Ambler beta-lactamase classification, and which have the ability to hydrolyze and confer resistance to carbapenems such as imipenem, meropenem, ertapenem and doripenem. [5-7]. MBLs, which are a type of carbapenemases, are an emerging public health problem among clinically important Gram-negative organisms and environmental isolates including Pseudomonas aeruginosa, Acinetobacter baumannii and the Enterobacteriaceae. [2,3,7]. The broad spectrum activity and stability of the carbapenems to most beta-lactamase enzymes such as ESBLs makes the carbapenems an effective tool for the treatment of severe Gram-negative infections. [3,8,9]. Nevertheless, there are plethora of reports on the prevalence of MBL-producing Gram-negative bacteria from both clinical and environmental isolates around the world. [4,10-14]. The MBLs are known to confer variable range of high resistance to all betalactam antibiotics except the monobactams and their presence in clinically important Gram-negative bacteria have put the use of the carbapenems under threat. [5,7]. The MBLs belong to a group of beta-lactamases which requires divalent cations such as zinc ions as cofactors for their enzyme activity. [9]. The production of MBLs as a carbapenem resistance factors is a top arsenal of pathogenic bacteria used to make less-efficacious the therapeutic effects of the carbapenems and cephalosporins. [4,9,15]. MDRGNOs that produce MBLs in the community especially amongst animals and poultry birds are a constant source of the emergence and spread of antibiotic resistant bacteria in human population. [9,15]. These non-hospital sources of MBL-producing bacteria are of public health importance due to the possibility of transmission to humans through contact or consumption of contaminated animal and poultry products. This study evaluated phenotypically the detection of MBL among carbapenemresistant Gram-negative bacteria from abattoir and poultry sources.

Quality control test to determine and confirm the isolated organisms as Escherichia coli, Pseudomonas aeruginosa and Klebsiella species was done with the reference strains: Escherichia coli ATCC 25922, Pseudomonas aeruginosa ATCC 10145 and Klebsiella species ATCC 700603 (Oxoid, UK); and this was based on the microscopical and morphological and/ or colonial characteristics of these control strains on culture media plates of MAC, cetrimide selective agar and EMB agar. The morphological appearances of the quality control organisms under the microscope were also used to evaluate the organisms isolated. These quality control strains were also used as standards for performing antimicrobial susceptibility testing.

To phenotypically screen for the production of MBL in the test isolates, the susceptibility of test organisms to imipenem (IPM), meropenem (MEM), and ertapenem (ETP) was evaluated as per the CLSI criteria (CLSI, 2011). Test isolates showing inhibition zone diameter (IZD) of ≤ 23 mm were considered and suspected to produce MBL enzyme; and these isolates were further tested using a phenotypic confirmation test. [6,11].

The modified Hodges or Cloverleaf test was performed by aseptically swabbing MH agar plates with Escherichia coli ATCC 25922 strain. The inoculated MH agar plates were allowed for about 5 min; and imipenem (10 μg) disks were aseptically placed at the center of the MH agar plates. The test bacteria (that showed reduced susceptibility to any of the carbapenems, and as adjusted to 0.5 McFarland turbidity standards) were heavily streaked from the edge of the IPM disk to the circumference of the MH agar plates. Susceptibility plates were incubated for 18-24 hrs at 30oC. The plates were macroscopically observed for indentation, and the growth of the test bacteria towards the imipenem disk. Growth of test bacteria towards the carbapenem disk is indicative of MBL production phenotypically. [6,11,13,14]. 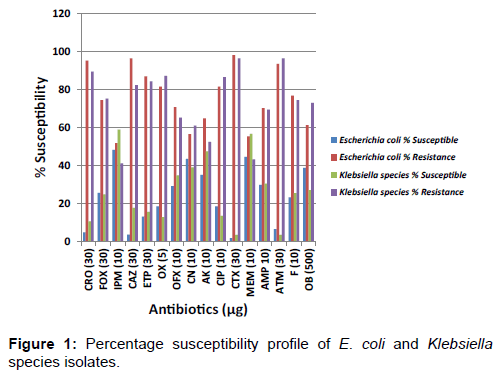 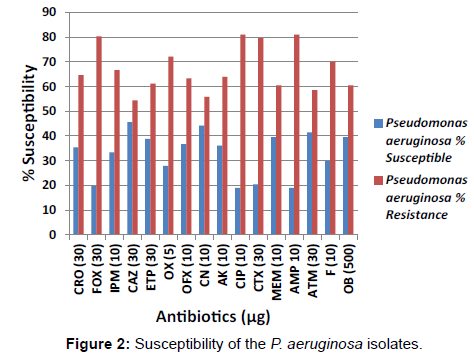 This study reported the prevalence of MBL-producing Gramnegative bacteria from abattoir and poultry sources in Abakaliki metropolis of Ebonyi state, Nigeria. The MBL producing bacteria in this study showed high level of resistance to some commonly available antibiotics especially to those in the class carbapenems and cephalosporins. Our study indicates a possible emergence and spread of MBL-producing bacteria in abattoir and poultry sources; and this could be connoted to the irrational use of antibiotics in animal husbandry and poultry practices.

This study was only conducted in a limited number of abattoirs and poultry farms in Abakaliki metropolis, Nigeria; and thus the findings cannot be generalized to the emergence and spread of MBL-producing bacteria in Abakaliki or Nigeria as a whole.

However, a further all-ecompassing study that incorporates molecular techniques is required to obtain sound epidemiological data as to the actual prevalence of MBL-producing bacteria in Abakaliki and Nigeria.

Our appreciation goes to members of staff of Applied Microbiology Department, Ebonyi State University, Abakaliki, Nigeria for technical support with some laboratory equipment.