Genetic Polymorphism of CYP2C9 among Sistani Ethnic Group in Gorgan

Background: Cytochrome P450 2C9 (CYP2C9) is involved in metabolism of many important drugs and its genotype variations is thought to affect drug efficacy and the treatment process. Aim: The aim of this study was to assess the distribution of CYP2C9 allele and genotypic variants in Sistani ethnic group, living in Gorgan, South East of Caspian Sea and North East of Iran. Subjects and Methods: This study included 140 Sistani, referred to the health center of Gorgan. CYP2C9 genotyping was carried out by Polymerase Chain Reaction -Restriction Fragment Length Polymorphism technique. Results: The allele frequency of CYP2C9*1, CYP2C9*2 and CYP2C9*3 was 76.1%, 16.1% and 7.8%, respectively. The frequency of CYP2C9*1/*1,CYP2C9*1/*2, CYP2C9*1/*3, CYP2C9*2/*2, CYP2C9*2/*3 and CYP2C9*3/*3 genotypes was 53.9%, 22.1%, 11.4%, 2.9%, 4.3% and nil, respectively. Conclusions: Our findings demonstrate that different genotypes of CYP2C9 may influence the pharmacokinetics of some drugs. Determining the pharmacokinetic effects of CYP2C9 genotypes may help physicians choose optimal dosage of some drugs for treatment and prevention of their side effects. Since different ethnic groups from all over the world use medications, it is necessary to investigate the pharmacokinetic effects of CYP2C9 genotypes in different populations.

Cytochrome P450 2C (CYP 2C) subfamily of enzymes metabolizes approximately 20–30% of most pharmaceutical drugs and CYP2C9 is known as its main isoform [1,2]. This enzyme is encoded by a gene located on chromosome 10q24 which shows genetic polymorphism [3]. Variations during genetic polymorphism of this enzyme may change catalytic activity of the enzyme in drug response [3,4]. The CYP2C9 allele frequencies vary among different populations and many studies on CYP2C9 polymorphism in different populations have shown a significant difference in the frequency of alleles and genotypes [5]. This may be the cause of possible ethnic differences in drug response. Variations in genotype of enzyme have shown that the effect of some genotype is the most acute with S-warfarin metabolism when compared to the wild type genotype. Clinical studies have also indicated that subjects with the mutated genotypes need 10- 20% and/or 20-50% lower doses of S-warfarin, when compared to wild type subjects [5]. CYP2C9 is involved in the metabolism of important drugs such as (S)-warfarin, losartan, rosuvastatine, tolbutamide, glipizide, glibenclamide, the diuretic torsemide, phenytoin, flurbiprofen, ibuprofen and diclofenac [6,7]. The mutated alleles of CYP2C9 are CYP2C9*2 and CYP2C9*3, CYP2C9*6, CYP2C9*15, and CYP2C9*25, but CYP2C9*2 and CYP2C9*3 are the most prevalent variants [8,9]. These alleles are also the most common variants in white populations (CYP2C9*2=0.08–0.14% and CYP2C9*3=0.04–0.16%) while, some studies indicated a significantly lower frequency of these alleles among Asian and African populations [10,11]. Some studies have shown that the CYP2C9*2 allele is considered in European, Middle Eastern and Central and South Asian populations. This allele was absent or considered at very low frequencies in Africa, East Asia, Oceania and the Americas. The CYP2C9*3 allele shows the highest frequency in the European and Central/South Asian populations [12]. Some other studies have revealed that the frequency of the CYP2C9*3 allele among Japanese and Taiwanese populations are 2.1% and 1.7%, respectively. Meanwhile, the CYP2C9*2 allele was not detected among the Han Chinese, Japanese and Taiwanese populations [13]. As mentioned earlier, these alleles may change the catalytic activity of CYP2C9 [6] and on the other hand, many studies have shown the variations among different ethnic groups. We have previously studied the genetic polymorphism of CYP2C9 gene among different ethnic groups in Golestan province [14,15]. This study aimed to assess the distribution of CYP2C9 allele and its genotypic variants in Sistani ethnic group in the city of Gorgan, South East of Caspian Sea, and North East of Iran.

This study involved 140 healthy Sistani (people who speak Sistani as native language) who were referred to a health center in Gorgan (South East of Caspian Sea, North East of Iran). The sample size determined under supervision of statistical expert. This study was approved by the Ethical Committee of Research Deputy of Golestan University of Medical Sciences. Written consent was obtained from all the study subjects. The distribution of CYP2C9 allele and its genotypic variants in Sistani ethnic group were determined and compared with other populations. First, 5 ml of blood was obtained from all the subjects into EDTA tubes. Peripheral white blood cells were used for DNA extraction by salting-out method [16]. Two times distillated water was used to dissolve the extracted DNA. Collected samples were stored at -20oC. CYP2C9*1, CYP2C9*2, and CYP2C9*3 alleles genotyping were performed by Polymerase Chain Reaction (PCR)-Restriction Fragment Length Polymorphism (RFLP) technique using Genetix CG palm-thermocycler (India) [17]. The PCR was done in a 25μl reaction mixture including: PCR buffer (10 mM Tris–HCl, pH 9, 2 mM MgCl2 (Fermentas), 50mM KCl (Fermentas), 0.2 mM deoxyribonucleotide triphosphate (dNTP) mix, 1 U/μl Taq polymerase (Fermentas), 0.4 μM of each primer (Bioneer), 100 ng DNA (Genomic) and two times distillated water. Digestion of PCR products (10μl) was performed using restriction enzymes (Fermentas), Ava II for CYP2C9*2 and Kpn I for CYP2C9*3 at 37 oC for 16 hours. Primer amplification was done using the method explained previously by Aithal et al. [18]. 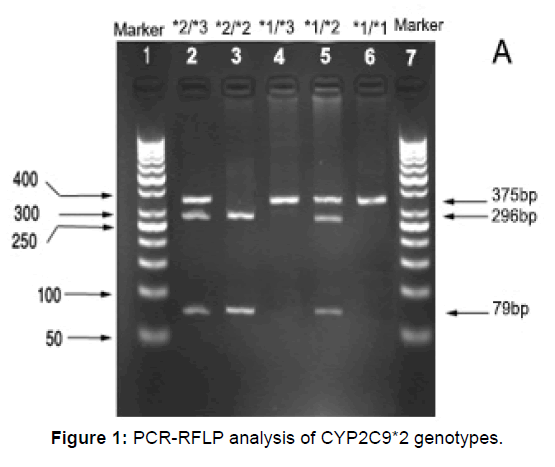 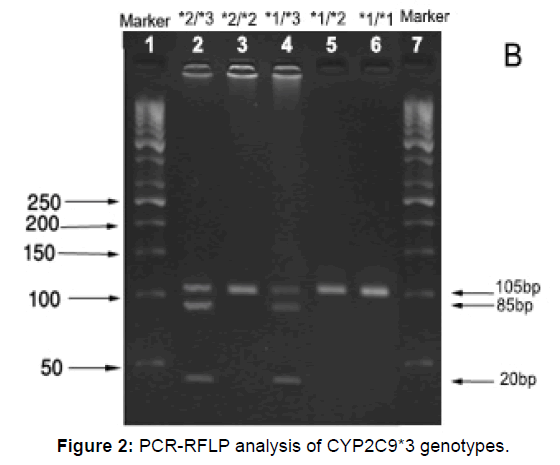 Chi-squared test was carried out to determine and compare the allele and genotype frequencies of CYP2C9. The frequency of alleles variant was determined using 95% confidence intervals (95% CI). Fisher exact test was used to compare the variations of allele and genotype frequencies between Sistani ethnic group and other populations. The analysis of data was done using SPSS version 16.0 and p-value of less than 0.05 was considered as statistically significant.

Table 2: Distribution of CYP2C9 alleles among the Sistani ethnic group and its comparison with other populations

Table 3: Distribution of CYP2C9 genotypes among the Sistani ethnic group and its comparison with other populations

The authors would like to thank the deputy of research and technology of Golestan University of Medical Sciences, Iran.