Objectives: Caudal epidural steroid injection (CESI) is used frequently in the treatment of patients with chronic lumbar pain and leg. Obesity is one of the main reasons of lumbar pain. In this study of ours we tried to assess the effects of CESI on patients with normal weight, over weight and obese suffering from lumbar pain. Design: Retrospective Study. Settings: DiyarbakÄ±r Selahaddin Eyyübi State Hospital. Subjects and methods: Our study is conducted on 300 patients to assess the effects of CESI on whom lumbar and leg pain persisted for three months between January 2015-December 2016. US guidance used for all injections. Groups were allocated as: GroupI: BMI<25 kg/m2, GroupII: BMI>25 kg/m2 and Group III: 30 ≤ BMI<40 kg/m2. Main outcome measures: 130 participants were identified as normal weight, 116 over weight, 54 obese. Pain scores were assessed by using Visual analogue scores (VAS). VAS scores were measured at preinjection, 1st, 3rd, and for a period of 6th months after injection. Life quality was evaluated with Short Form – 36 (SF-36). Results: After injection VAS scores were found lower for all repeated measured times during the six months interval (p<0.05). No statistical differences were found between the groups regarding age or gender. In all groups the number of patients suffering from chronic low back pain was high and the highest score was found in Group III but statically not significant. SF-36 scores were found improved after injection compared to baseline values. Conclusion: CESI is helpful in relieving pain for all patients at all weights and improves the quality of individual’s daily life.

With the usage of the local anaesthetics and steroids caudal epidural injections are one of the most commonly and increasingly used interventions in the treatment of chronic low back pain (LBP) and lower extremity pain in the last sixty years. The approaches of epidural injections are interlaminer, transforaminal and caudally. The tecniques can be performed blindly, with the guidance of fluroscopy, or with ultrasonography. Chronic LBP associated with discal hernia, limits the individual’s daily activities. [1,2] Approximately 60-85% of people all over the world have experienced low back pain in any period of their lives. [3] Estimated prevalence of LBP is 60-85% in the world. Obesity and overweight increases the risk unfortunately. [4] The mechanism can be explained as systemic inflammation, disc degeneration and the overload on the vertebrae. First step LBP treatment should start with conservative methods. Surgery is the second choice, in case when conservative treatments fail. The overall effectiveness of epidural steroid injections has been highly variable and in the recent years has taken the place of conservative treatments. [5]

In this study, we aimed to find the association between the CESI and BMI in patients whom medical and conservative treatments had failed.

After obtaining approval from Institute’s Ethics Committee, 300 patients data with chronic LBP having low and upper discal hernia more than 3 months duration retrospectively evaluated. All injections were performed with the guidance of US. Patients were allocated into three groups as BMI< 25 kg/ m2: normal weight, BMI>25 kg/m2: overweight and BMI>30 kg/m2 as obesity. 117 patients were found to be normal weight, 104 over weight and 49 obese. Patients were pre-assessed in the algology department. Age, gender, height, weight were evaluated. The exclusion criteria of our study were the indications for surgery, extrude disc on MR scan, allergic both to steroids and local anaesthetics, infection on the injection side, coagulation abnormalities, pregnancy, and breast feeding. After getting written consent from all patients, the same procedure was performed. Patients were taken to the operation room 18 G cannula was accessed. Before the injection 500 ml of isotonic saline solution infusion was administered. For all the patients routine monitorization was carried out. For the urgent complications such as bradyarrhythmia, hypotension atropine sulphate and ephedrine were ready. After achieving prone position on the operating table skin preparation was done. The sacral hiatus was marked and the skin overlying the sacral hiatus and the ligaments underlying were infiltrated with local anaesthetic of 2 ml of 2% lidocaine without epinephrine. We used 22 gauge spinal needles between the sacral cornu at about 45; with the level of the spinal needle facing ventrally until contact with the sacrum. Then we redirected the needle more cephaleded, and parallel to the operation table, pushing into the canalis sacralis through the sacrococcygeal ligament just into the epidural space. After the aspiration test, hoosh test was performed. Drug mixture of celestone 6 mg (1cc) with bupivacain 15 mg (3 cc) and 16 ml saline solution infused. At the end of the injection, patients were taken to the recovery room for hemodynamic monitorization. Patients with paresis, pain and function loss in legs, offered to stay in the hospital for 48 hours. In case of the injection failure, CESI repeated in a period of two weeks.

For pain evaluation we gave each participant a VAS questionnaire which had 10 cm horizontal line corresponded to headache, dizziness, fatigue. The patients marked a single slash in the corresponding questionnaire that best presents their worst feelings. The left end of the line is 0 mm with the word “none” and the right end is 100 mm with the word “severe”. Intermediate points along the line represent varying degrees of symptoms. Then, we transformed the corresponding tag into a score as VAS (0= having no pain and 100=having worst pain). Before injection, and at 1, 3, 6th month following injection VAS scores were measured.

A SF-36 was invented to put forth health status by Ware in 1987. This includes one multi-scale which detects totally eight health profiles (limitations in physical and social activities, in usual role activities, bodily pain, general mental health, limitations in usual role, vitality, general health perceptions). It appears to be reliable and valid and suitable for all illnesses. As the scores increase measure of health quality increases. [6,7] The participants were asked to answer the questionnaire before and after the injection. [7] 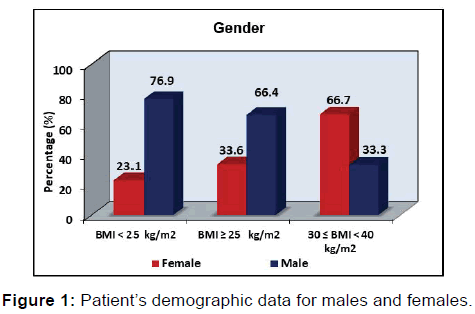 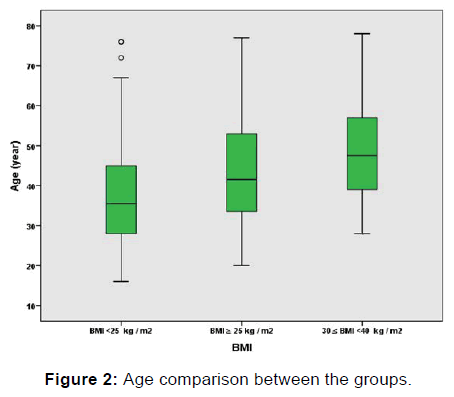 Figure 2: Age comparison between the groups. 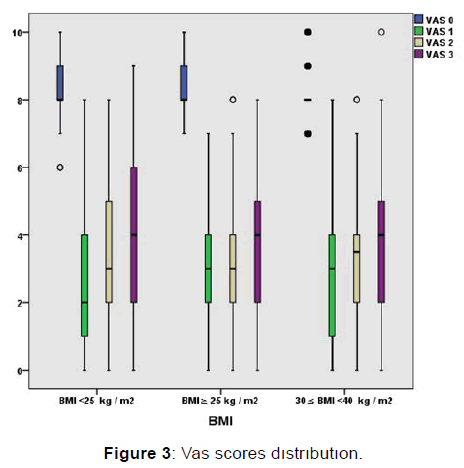 According to the SF 36 measures in a period of three months after CESI were found improved statistically (p< 0.05). SF 36 scores were shown in Figure 4. 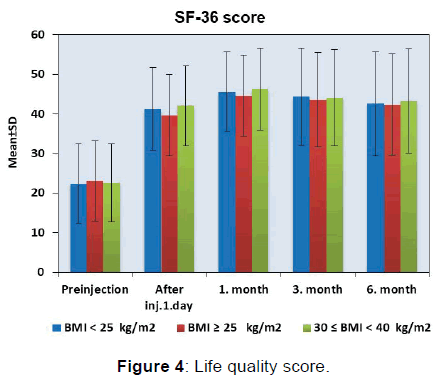 In our study we revealed the effects of CESI in normal, over weight and obese patients resistent to medical and conservative treatments for discogenic pain. In result VAS scores were found lower in all groups for all repeated times after CESI (p< 0.05). In addition to the health quality which was assessed by SF -36 were found improved again in all groups after CESI at all repeated intervals in six months. CESI was frequently used for discogenic pain. Here the aim was to suppress the inflammation within the disc thereby alleviates the pain. It is preferred for the cases resistant to medical and conservative treatments. [8] Almost 80% of the population has back pain in their lives. Discogenic pain has been postulated the frequent cause for back pain seen in 30-60 years. The risks factors for herniated discs are immobilization, tobacco use, poor posture, and lack of regular exercise, obesity and improper lifting. Excess body weight causes extra stress on the discs. Disc is a soft rubbery pad between the vertebrae which carries our weight. When disc herniates the nucleus protrudes and presses the nerve through the spinal canal. [9]

O Neill et al. reported higher osteophyte scores in the upper tertiles of body weight. [10] In another study Biering Strenson performed, people with BMI of 30 kg/m2 and higher experienced twice as likely difficulties in performing physical activities daily and reported that absolute weight and BMI were significantly higher in individuals at 60 years of age with spondylosis. [11] Cushman demonstrated that during fluoroscopically guided intra-articular hip injections elevated radiation dose observed with the increase in BMI. Larger BMI leads to increased radiation exposure, but in our study as we used US no radiation eliminated. [12]

In another study Owlia MB compared the doses of 40 mg steroid and 80 mg steroid in CESI. In conclusion 40 mg methylprednisolone was as effective as 80 mg methylprednisolone with comparable results. In our study we used 6 mg betamethasone in CESI. Future trials can be performed with low dose 3 mg betamethasone. [13] Baysal and friends compared the epidural steroid injection between the obese and non-obese patients. They didn’t experience any difference between the groups. In our study the patients identified as normal, over weight and obese. For all the three groups after CESI pain improved. [14]

Janjua in a randomized study compared the epidural steroid doses. High volume was found to be effective in their study. We used for all groups %0.5 bupivacaine with 6 mg celestone with saline solution totally of 20 ml through the caudal space. [15] Dose comparable study is needed for future trials.

Klocke in another study stated that, with the guidance of ultrasound CESI could be fast and safe for achieving needle placement. Clinical efficiency of their studies were comparable with our findings. US guidance we achieved faster needle placements for normal, over weight and obese patients. [16]

Park Deok performed CESI for unilateral radiculopathy with the guidance of US and fluoroscopy. For 110 participants they used 20 cc solutions (%0.5 lidocaine 18 ml+10 mg dexamethasone 2 ml). The results were not statistically different. The doses and the complication rates were the same with ours [Figure 5]. [17] 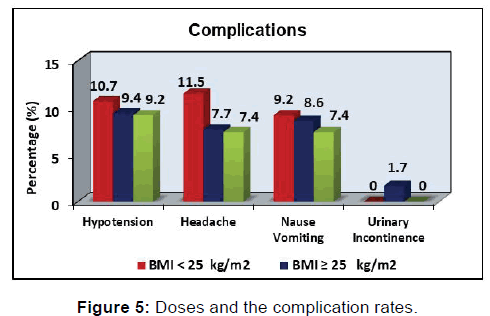 Figure 5: Doses and the complication rates.

Although CESI is a common treatment, it isn’t devoid of complications. There are many published reports of complications in literature. Major complications reported are, parapleji, dural puncture, intratecal injection, intravascular injection, nerve injury and even death. [18-20] Transient minor complications include headache, nause and vomiting, insomnia, hypotension, vasovagal reactions. [21,22] Kaydu and his friends reported a rare complication persistent hiccups after CESI. [23] In our study, hypotension in 30 patients, head ache in 28 patients nause in 26 patients urinary incontinence in 2 patients were reported. Patients were monitored in the postoperative anaesthesia care unit for 12 hours. All patients had recovery without any additional treatments in 12 hours. No intraoperative complications were observed.

We aimed to evaluate the results of CESI for chronic low back pain by using SF-36 quality measure. Assessments of quality of life measures were found significantly improved after CESI for all groups.

In conclusion, agreement with other studies CESI is an acceptable method for treating various types of low back pain resistant to conservative treatments for all weight groups. Achieving pain relief, it improves the quality of life. Based on our findings we recommend CESI as a riskless, easy and reliable treatment method.